Two villages in UP's Barabanki district openly produce heroin. The cops appear to be in a daze. 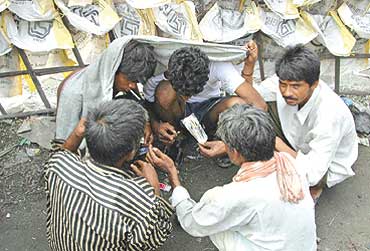 outlookindia.com
-0001-11-30T00:00:00+0553
Only if you are in the Narcotics Control Bureau (NCB) or in the drug trade would you have heard of Tikra Usma and Tikra Murtaza. Some 45 kilometres from Uttar Pradesh's capital Lucknow, these two villages have a population of 6,000 but figure prominently on the drug trade map of Southeast Asia. Laboratories which process morphine into heroin are a cottage industry here. The local police seem to be in cahoots with the drug lords and seldom raid the crude makeshift labs which are guarded by the village dons and their henchmen. According to NCB officials in Lucknow, the drug trade in the two villages is worth about Rs 1,500 crore a year.

Some of the heroin—and its impure form, brown sugar—comes into the market in Lucknow and other UP cities. But the bulk of it is transported through truckers who deliver it to agents in Murshidabad district in West Bengal. From there it goes to Bangladesh and then on to dealers in Southeast Asia. Says an NCB official: "Very little is sold locally and the big players are not involved in it. It is the international market that the big fish concentrate on."

The drug hauls from the villages in Barabanki district are a clear pointer to the volume of the trade. Last year, 40 arrests were made and 43 kilos of heroin seized. According to the NCB, only a small percentage of the heroin produced is recovered by the police. But the arrest of a drug trafficker like Altaf Hussain, who was caught with 53 kilos of heroin in 1996, shows the extent to which the trade has taken root. According to NCB officials, a kilo of heroin fetches about one crore in the international market.

Outsiders are viewed with considerable suspicion. We were warned by the police to be careful and were told that we could come to harm if we were caught taking photographs. It was made known to us that many of the villagers are armed. The village pradhan simply disappeared when we went looking for him. It was only the NCB office in Lucknow, and a few villagers, who were willing to share information about the thriving drug trade.

Tikra Usma and Tikra Murtaza have a historical association with the drug trade. Many here are second or third generation traffickers, tracing their roots to the early days when they used to grow poppy. Now they are either working the heroin laboratories or are peddling drugs in the local area. The trade has made the two villages rich. They have very few hutments as most villagers are able to afford multi-storied concrete houses. 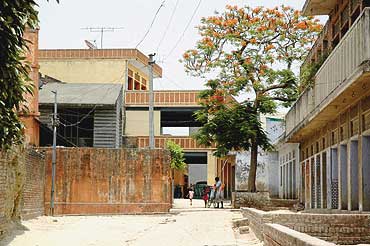 One big name in the now-defunct opium trade is that of Jaseem, who is now 71 years old and is perhaps one of the richest in the area. Owner of a plush villa and several luxury cars, he even had plans to buy his own helicopter. Today, he is out of the opium business since people have learnt to make heroin from morphine, making quicker and higher profits.

The raw material for producing heroin is morphine. It is bought from the poppy- growing areas of Jharawal, Chittorgarh, Bhavani Mandi, Bhilwara and Kota in Rajasthan and Mandsaur, Jaura and Ratlam districts of Madhya Pradesh. Most of the morphine is brought by train by carriers who work for the drug lords. The conversion of morphine to heroin base is a simple and inexpensive process. The laboratory is made up of large cooking woks, measuring cups, funnels, filter paper, litmus paper and enamel or stainless steel pots. Heroin synthesis from morphine is completed in two steps and takes about four to six hours. "When it is ready, it is mixed with at least 70 per cent of synthetic powder because of which the profit margin is unbelievably huge. Besides heroin, the villagers also trade in brown sugar (smack)," says deputy narcotic commissioner, Vijay Kumar. 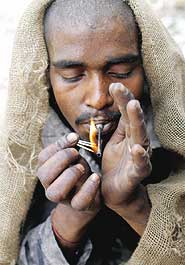 The investigating agencies say pinning down the big players is difficult. For example, though everybody speaks openly about Jaseem's decade-long involvement in the opium trade, he has never been arrested."We are helpless till we catch them red-handed, their network is so strong that the minute we plan to visit the village they all rush to their hideouts," says an official from the local police station in Zaidpur. But inspectors of the NCB are dismissive of the police itself: "There have been instances when we have reached the village for a raid and the local cops have not let us search. Heavy bribes are paid to get a posting here since one can become rich overnight."

The economic impact of the drug trade is plain to see in these villages. Almost each house, big or small, has its own power generator and everyone seems to own weapons. In many cases, profits from the drug trade are invested in legitimate businesses. Most have routed their earnings to purchase expensive cars for luxury hotels in Lucknow and Kanpur. Others have built shopping complexes and apartments in UP cities. Says a villager: "There is no poverty here. Practically everyone is rich." And it will stay that way till the law looks the other way while the labs spew the deadly venom.