'Water' is a film about the sexual exploitation of widows with a dose of shastras thrown in. But it fails to drive the point home. 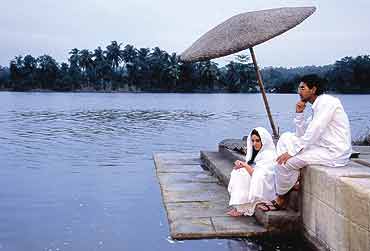 Set in colonial India in 1938, Water explores the plight of widows through the eyes of the eight-year-old Chuiya (newcomer Sarala) who is sent off to a widows' home after the death of her aged husband. The head widow Madhumati (yesteryear's Hindi comedienne Manorama) supplies young inmates of the ashram to local landlords and rules the place like the Big Mama of a brothel. Shakuntala (Seema Biswas) is the quiet observer who counters this exploitation by making the beautiful young Kalyani (Lisa Ray) escape the ghetto. But Kalyani's freedom is short-lived—she commits suicide on realising that the Gandhian idealist she is in love with (John Abraham) is the son of the man she's been supplied to for years. In the end, when Chuiya too is slyly initiated into the trade, Shakuntala decides to free the child by handing her over to Gandhi's reformist supporters.

Water has already had a successful commercial run in Canada, grossing almost $1.5 million in four weeks after its release—the highest collections for any independent Canadian film this year. It is also the first Canadian film to have been bought by Fox Searchlight for a North American release in March 2006. It has even had a tough-to-please Salman Rushdie raving. "The film has serious, challenging things to say about the crushing of women by atrophied religious and social dogmas but, to its great credit, it tells its story from inside its characters, rounding out the human drama of their lives and unforgettably touching the heart," he says.