Do voters really care about corruption? The figures tell a story. 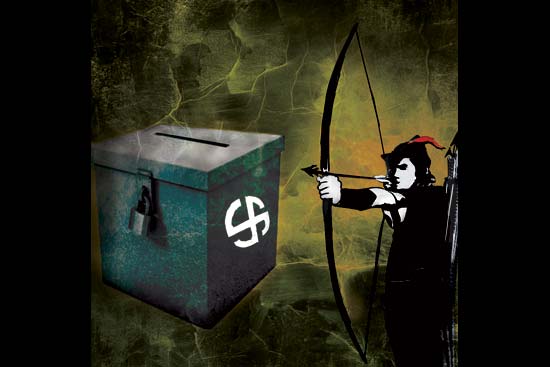 The central question in the turmoil inside the Aam Aadmi Party (AAP) is one of how astute is the Indian voter? Arvind Kejriwal, as reported, believes the voter is susceptible to rhetoric and indifferent to corruption. Yogendra Yadav and Prashant Bhushan believe the voter is contemptuous of the corrupt, the communal, the criminal. After the Delhi election results, pundits were quick to attribute moral acuity to voters—that they had taught the haughty and mighty a lesson.

In the middle of such optimism about the enlightened voter, the byelection results in Srirangam, Tamil Nadu, declared on February 16, present a sobering reminder. The byelection was the result of a Supreme Court judgement stripping elected representatives of their office upon conviction. The byelection in Srirangam was necessitated  by the conviction of Chief Minister J. Jayalalitha in September 2014 in a corruption case. What Jayalalitha did was to make an emotional appeal to voters: as leader of her All-India Anna Dravida Munnetra Kazhagam (AIADMK) party, she implored the voters of Srirangam to “imagine” she herself was contesting again and come out in large numbers to vote for her party. In short, she dared voters to send a message that her criminal status, as deemed by the courts, was inconsequential and the SC ruling disqualifying her was misplaced.

The voters complied: 82 per cent of registered voters turned up and 70 per cent of them voted for the AIADMK. Never before have so many turned up and voted for one party. While byelections in Tamil Nadu have a record of proving favourable to the ruling party (as in this case), it must be noted that no byelection in the state since 1990 has seen such a massive turnout and mandate. It’s quite clear the voters had a point to prove.

A year before Jayalalitha’s eviction from office, Laloo Prasad...