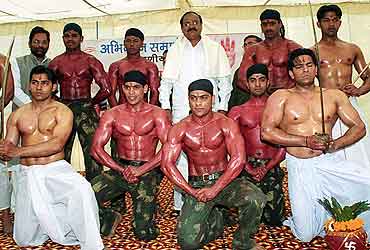 After quitting the BJP in February 2000 "Vajpayee talks of nationalism, but follows casteism; he speaks of swadeshi but encourages MNCs, and appears large-hearted but is actually narrow-minded."

When he rejoined the BJP in February 2004 "Vajpayee was, is and will remain everyone’s leader. He is truly large-hearted. I have come seeking his pardon and blessings and give myself in return."


Everybody Is A Friend In An Emergency

The BJP has till now described Indira Gandhi’s Emergency as one of India’s darkest hours. Many of the party’s stalwarts were thrown into jail during that period. Yet ever since coming to power, the bjp hasn’t batted an eyelid about joining hands with people associated with the Emergency. The latest is Feroze Varun Gandhi, son of the CEO of Emergency, Sanjay Gandhi. He joined the party last week along with mother Maneka. Varun, of course, is refusing to dwell on the irony of the situation. Instead, he is focusing on becoming the ‘progressive face’ of the BJP. The baby-faced Varun, all of 23, will now make his political debut at a Lucknow rally on February 29, to be addressed by Vajpayee himself. One wonders if the poet in Varun (he is the author of The Otherness of Self, a book of verse) will stand him in good stead with Vajpayee. One thing is for sure though: Varun will get to test his Hindi, which he renders with elan after all those tuition lessons, with the Lucknawis. But let us not single out Maneka and Varun for the sins of the Emergency. Jagmohan, a respected figure in the Vajpayee government, was closely associated with Sanjay Gandhi in the infamous Delhi demolitions. Earlier, the BJP had also aligned with Bansi Lal, and V.C. Shukla, both part of the Emergency’s ‘Gang of Four’.

Lending a fresh, hip look to the Lok Sabha 2004 campaign are a slew of techno-savvy whiz kids. They have traded marmite and coffee for gur and bajre ki roti and Page 3 parties for vibing with the village folk.

Manvendra Singh, 39, ex-journalist son of finance minister Jaswant Singh, is back to his ancestral roots in the arid Barmer district of Rajasthan. The BJP parachuted him there in 1999 barely a fortnight before the elections and he lost. This time, he’s determined to carry the day. Sachin Pilot, 27, son of the late Rajesh Pilot, loves the business of politics. "It is a calling," says the ex-Wharton management student. He was recently in the news for marrying Sara, Farooq Abdullah’s daughter when her family had not said ‘they do’. His sights are set on Dausa in Rajasthan.

Jitin Prasada, 29, son of the late Jitendra Prasada and also an MBA, is in charge of the Youth Congress in Delhi, Himachal and J&K. He wants to contest from Shahjahanpur in UP. Sheila Dixit’s son Sandeep and Murli Deora’s jazz guitarist kid Milind are yet to decide if they will contest.

In the last two months, the Congress government has pulled off events such as the ‘bhoomi pooja’ for an international airport and declared open the half-constructed Vikas Soudha. A day before he dissolved the assembly, Krishna launched 20 developmental projects in his constituency, Maddur. 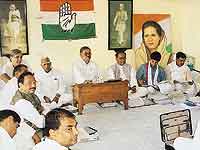 In October last year, Congressmen were falling over each other to grab party tickets for assembly elections in Madhya Pradesh. Four months and a severe mauling later, the party is finding it difficult to find candidates to fight elections. A host of party leaders have chosen to ignore feelers while some have flatly refused. "Why do they want us to spend Rs 50 lakh from our pockets to lose elections?" is the common query.

One strategy the party has come up with is to call upon all senior leaders and some sitting mlas to contest. Leader of the opposition Jamuna Devi for Dhar, Arjun Singh for Satna, former assembly speaker Hazarilal Raghuvanshi for Hoshangabad, and former minister Harbans Singh for Seoni have been drafted for elections. "If they win, the party gets a Lok Sabha member, if they lose, their assembly memberships are intact," goes the logic.

Wrong End Of The Sting

Former Chhattisgarh chief minister Ajit Jogi, suspended by the Congress for scripting the MLA purchase scam, has hit the campaign trail with a vengeance. His roadshow has already covered Durg, Raipur, Bilaspur and Korba and attracted sizeable crowds, giving both the Congress and the BJP the heebie-jeebies. At least a dozen Congress MLAs, still loyal to him, were in attendance during his tour, seen as a prelude to Jogi floating a new regional outfit. cwc member Ashok Gehlot, in charge of Chhattisgarh, has hinted that Jogi’s suspension would be revoked before the polls. He may be left with no option but to rehabilitate Jogi— particularly if the party is faced with the prospect of a formidable BJP-V.C. Shukla combine. But PCC president Motilal Vora and working president C.D. Mahant are against the move.


Dubious Distinction
Three months on, Uma Bharati’s constituency has no power or water