Home  »  Magazine  »  National  » Interviews  » Gropers’ Campus »  ‘Police Chased Us Even Into Our Hostel Rooms. We Want An Apology From The V-C’

‘Police Chased Us Even Into Our Hostel Rooms. We Want An Apology From The V-C’

BHU's student, who was part of the entire sequence, describes her ordeal ever since they raised demands for greater security against sexual harassment. 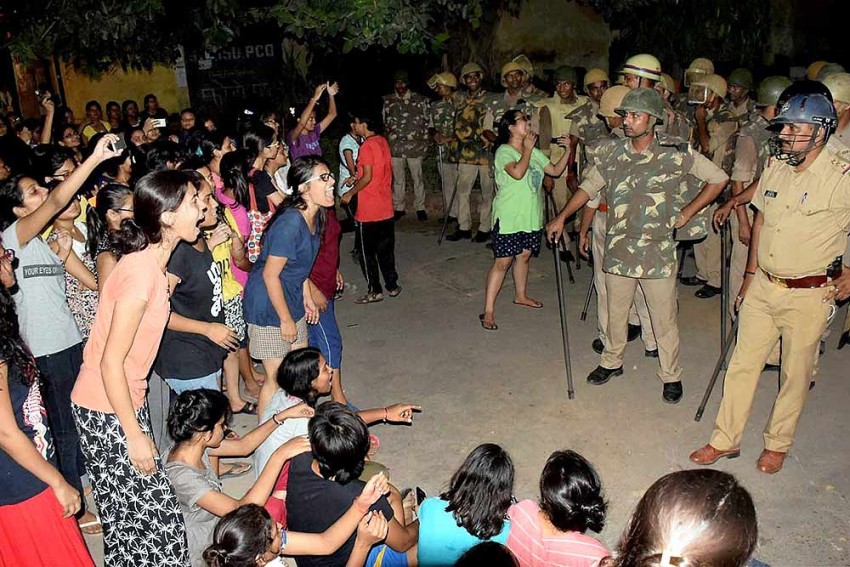 Pent Up
Women students protest at BHU, while a posse of policemen looks on
Photograph by PTI
Pragya Singh September 28, 2017 00:00 IST ‘Police Chased Us Even Into Our Hostel Rooms. We Want An Apology From The V-C’ 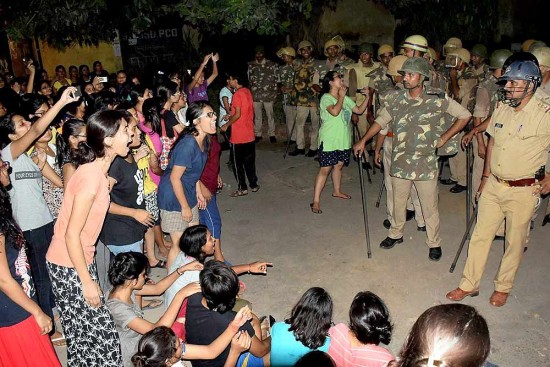 Banaras Hindu University’s campus is one of the largest in Uttar Pradesh. It is accessible through several gates, the most renowned and biggest of which overlooks Lanka, a locality in Varanasi. It is at this gate that hundreds of students of BHU, mostly women scholars, were protesting since 6 am on September 21. It is from this historic site that they were lathicharged by police and chased into their hostels. Videos of the all-woman crowd being beaten by police have since gone viral, sending shockwaves through the country.

The women students had come out in protest after an incident of sexual harassment on the campus, for which the BHU administration blamed the victim. She was the first to step out to protest against the unequal treatment of women in the university and the lack of basic safety norms there. She was soon joined by other hostel residents, and as she shaved her head in protest, became a symbol of all BHU women students’ demands.

Banaras Hindu University student Seema (name changed) was part of the entire seq­u­ence of events since September 21 and faced a police lathicharge which left her injured. In a conversation with Pragya Singh, she describes their ordeal ever since they raised demands for greater security against sexual harassment.

There are allegations that the protests are politically motivated. Are you and other protestors affiliated to any party or outfit?

I am just a student of BHU, not affiliated to any political party or outfit. On September 21 I saw a female student surrounded by three-four members of the proctorial board. The proctors were asking the girl why she was outside in the evening. I guessed immediately that she must have complained about sexual harassment. I went to my room after this, but when I awoke the next morning there was talk about a protest. The students were agitated because the girl who I had seen last evening had been blamed for the sexual harassment she had faced. That girl had come with other students of her hostel to protest at the Singh Dwar of BHU from 6 am onwards on September 22.

How did the protest become so big?

Later, everybody else started joining the protest. Everybody came for their own causes bec­ause there are many issues at BHU that students face. Slowly, as students arrived on the campus, the protest grew in size from a handful; then, a few hundred joined in, both women and men. The V-C almost met us twice, but finally didn’t show up. There was a delegation of four-five whom he apparently saw, but nothing came out of it.

What kind of slogans were you actually raising?

Our slogans were related to women’s empowerment and rights. There was nothing political in them. Also, it was completely peaceful on September 22 and it continued all night. That is, even after 8 pm, which is the curfew time for the girls hostel. We remained on the site, Lanka Gate.

What prompted the lathicharge then?

We had, in fact, expected water cannons to be used against us, or even tear gas shells thrown at us by the police. But none of those things happened. Instead, something absolutely unprovoked and unpredictable took place on September 23. Suddenly, the police charged at us.

Were you all raising unpalatable slogans or hurling abuses at the police?

Well, it was actually past midnight when the police went on a lathicharge. At that time, we were very tired, as we had been protesting the entire day. We had taken off our slippers and were actually preparing for another night of sleeping outdoors. We were quite exhausted by then, so there was no sloganeering at that moment. In fact, we were falling asleep from exhaustion.

All of a sudden, the police rained lathis on us—on our backs, or feet, our hands, our heads. They were beating us mercilessly. The students started running, and some of them went inside their hostels and the police chased them there also and beat them up.

The lathicharge you saw was completely unexpected? No warning?

It was absolutely unexpected. The injured girls mostly just went home with their injuries. That is why the extent of the lathicharge is understated in the media also. The girls were mostly too shaken to reveal what had been done.

There are only a few videos showing such thrashing and injuries....

Actually, the police were raining down blows indiscriminately. They hit girls on the head, arms, torso, wherever they wanted. You see, some of the injuries are on the back, thighs and stomach and the girls are unable to show them to the media or even talk about them. They were in fact catching hold of girls, surrounding them and then beating them up. They were also beating up boys.

Were you also injured?

Yes. There are swelling and visible injuries on my body.

Did any of you go and get medical treatment after the lathicharge?

Yes, we did. The girls with head injuries, of course, you have seen them on TV, but there are so many others, at least 100, who are injured. The college authorities did get us medical aid. We got CT Scans done also. But we did not get any physical medical records, on paper.

That is surprising. Why not?

Because the new session is about to start and though we have medical cards that are issued to students, they haven’t yet been renewed. As a result, we are still completely helpless before the university administration.

Did the college administration support students?

Our college teachers did support us and wardens rescued some girls from the police’s clutches. They requested police not to surround some of the girls and beat them. 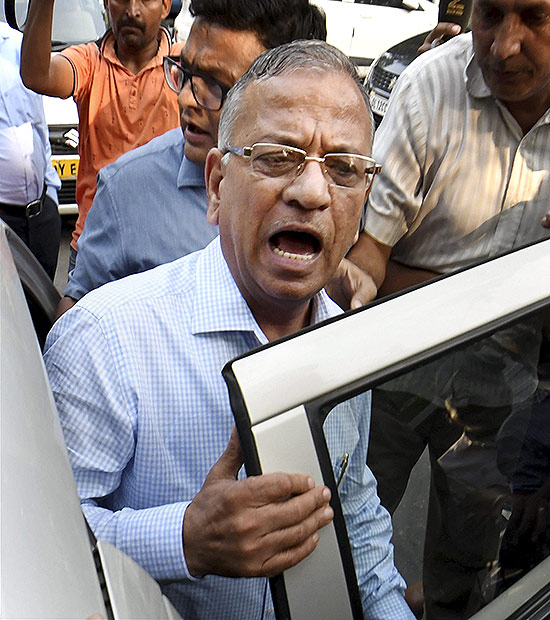 What about students’ bodies?

As you know, BHU does not allow a union. So we had no option but to protest when our demands were being ign­ored. The V-C has openly said that students were not protesting, that it was outsiders; he has completely ignored and denied the lathicharge, although there are videos and eye-witnesses. He has also not met any of us, nor did he address our problems.

Were male students protesting along with the women students?

Absolutely. They were with us throughout. They beat up boys also. Very badly, actually. Also, there were many rum­ours afloat. Such as how we have been told to vacate the hostels within a couple of hours. Later, it turned out that there was no official demand to clear the hostels. However, most of the girls have left by now.

What do the parents of students say now that all this has happened?

There is tremendous pressure from parents to return home. Parents are ext­remely anxious and worried. They fear that children are being dragged into politics and they are terrified that they will be suspended or lose a year. There is a lot of parental pressure.

The BHU authorities say Naxals and outsiders were involved in the protests....

There were some outsiders coming in, trying to raise the pitch and change the nature of the protest to political, but we didn’t allow that to happen. There were definitely no Naxals—this is just wrong propaganda. We raised no slogan against any political party. There were two protests going on, one at the main gate or the Lanka Gate side and the other at the V-C lodge. The latter was really just a handful of girls. The main protest was at the gate. Nobody raised any slogan for or against any party.

But did you find the reason to protest only when PM Modi was visiting Varanasi?

“Female students face a lot of sexual harassment and were tired of it. So we protested peacefully.”

Did the sexual harassment have to happen during Mr Modi’s visit? We students can also raise this question. Nothing about these protests were pre-planned. As I told you, I saw the proctors accusing the girl of being outside instead of taking action against the perpetrators. I saw every­thing with my own eyes. The female students here face a lot of sexual harassment and they finally got tired of it, that is why the protest took place. Also, until the police lathicharged us, there was no violence in the protest either. It had been completely peaceful. When the lathicharge took place, only then did some people from the boys’ hostel throw stones at the police in retaliation.

What exactly do the students want?

Street lighting, deployment of women police, an efficient and effective proctorial board, better security and, finally,  an apology.

What about on-campus discrimination against women through administrative rules?

Yes, non-vegetarian meals etc are issues, but when we don’t even get the basics—mainly security—then we are never able to raise issues related to other things. Women keep hesitating to even mention hostel timings, meals and equality with boys for rules for library access, because we don’t even get basic facilities. How do we even raise these issues?