Indian Writing in English is on its second leg now, what with our VVIPs getting seriously memoiristic 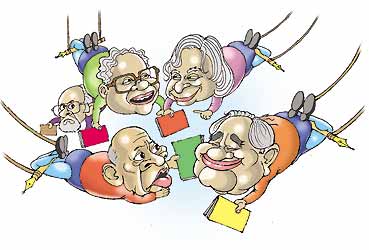 outlookindia.com
-0001-11-30T00:00:00+05:53
It will be raining books from Raisina Hill. In the next few months everybody will be out with one, from President A.P.J. Abdul Kalam and Prime Minister Atal Behari Vajpayee to ex-prime ministers P.V. Narasimha Rao and I.K. Gujral, and cec J.M. Lyngdoh, forcing even former president K.R. Narayanan to finally come out with the book he's been holding back from before he left office over a year ago.

Most of them, fortunately, are memoirs, disguised or otherwise. Unfortunately, none of them promises to be the kind of book that sets the nation by its ears. Some may be sorely trying. President Kalam, in his august wisdom, has gone in for that regrettable form he insists is poetry. Despite its promising title, his forthcoming book, My Journey (Penguin/Viking), is a collection of 20-odd "poems", including 17 he published privately in 2000 under the same title that's deservedly out of print. The poems—more like management mantras—include his favourite 'National Song' and 'For Mother Teresa'. They are written in English, so one can't even blame the translator for such bizarre phrasing as "Embed the thought of Nation being bigger than/ The Individual, in the minds of leaders and people" or, "Oh Almighty, bless all my people to work and transform/ Our country from a developing into a developed nation."

Mercifully, My Journey isn't just poems in the rousing style of public school magazines. With a foreword by Vajpayee, it also includes some personal anecdotes from his early life written in the unpretentious prose that has shot the President's previous books into the bestseller list. My Journey, which will be launched in November, will be followed by a more substantial, and no doubt more readable, book called My Inspirations—a set of personal essays on the men and women (and undoubtedly children) who changed his life. Judging by the sales of his previous books, Wings of Fire (over 100,000 copies), India 2020—A Vision for the New Millennium (over 50,000) and Ignited Minds (over 80,000), My Inspirations is one book that his publishers at least are looking forward to bringing out by the first half of next year.

Poet-Prime Minister Vajpayee, on the other hand, is eschewing poetry for prose. After the lukewarm response to his Twenty-one Poems (Penguin) last year, the PM has been wisely persuaded to turn to prose. The Rebirth of India, Vajpayee's thoughts on the nation, is tentatively scheduled for early next year. Much of it, however, is hardly new—his writings in papers and speeches with, hopefully, an introduction that holds it together.

Far more exciting is Narasimha Rao's sequel to his fictional memoir, The Insider. After revising and re-revising for the past few years, part two of The Insider is finally scheduled to appear in the high-book season of October-November next year. It continues the story of Anand, a thinly-disguised Rao. But what saves the memoir once again from descending into sanctimony is the overpowering presence of Indira Gandhi who's allowed to share—but never steal—the limelight with the self-proclaimed prodigy and politician.

The narrative, spreading over some 80 chapters, traces Anand/Narasimha Rao's growth from chief minister to a member of the Indira Gandhi cabinet, stopping shortly before his unexpected rise to prime ministership. It dwells in great detail over the Emergency and the events leading up to it. It was perhaps his fear of lawsuits that forced Rao to take great pains to provide a fictional facade to most of his characters, especially his cabinet colleagues and the men who wielded power from behind Mrs G's saree. Both Indira and Rajiv, however, are allowed to appear as themselves because these are the only two characters, apart from Anand of course, who escape unscathed.

As for the bit that had the nation panting for six years to read—his account of the Babri demolition—there's a tantalising flashforward to the Ayodhya events.In a brief chapter of around 3,500 words, Rao portrays the calamity in store for the nation. But far from being his version of the demolition, the Babri chapter is a dry and objective news analysis. Equally fleeting is the flashforward to Rajiv's assassination. Readers will have to wait for part three of The Insider for an inside account of his years as prime minister.

Like Rao, former president Narayanan is a compulsive revisioner. His book, The Making of Modern India, was first slated for publication while he was in office. On second thoughts, he decided to put it off until he quit office last year. There was a third rethinking: he took his manuscript back from his publisher to do some more updating. It's now scheduled for early next year, but his publishers, Penguin, are still keeping their fingers crossed.

It's a solid book, in all senses of the word: scholarly, thorough, deliberately excising all controversial material and stripped ruthlessly of all personalities. Considering Narayanan's long career as a diplomat and in politics—he worked closely with both Nehru and Indira Gandhi—Narayanan insists this book be read for his ideas and not for the names he can drop.

The first part of the book focuses on the drawing up of India's Constitution. But it's such a lucid and detailed account of the backroom history of the making of the Constitution that his editor says it left him with the clearest picture of the blueprint for the nation that he has ever had from reading history books. Non-controversial he may be, but Narayanan doesn't pull his punches, especially in the second half where he talks of how the nation has veered away from the vision laid out in the Constitution and where it has ended up. The book, despite its scholarliness and lack of reminiscence, is saved from being dust-dry by its unemotional, clear-eyed look at globalisation and its effects, at India's foreign policy and how it changed after the China war, on secularism, and muddled policies, especially in human resource development and population.

But if Narayanan has made sure that all personal encounters, which may have crept unintentionally into his book, are excised, I.K. Gujral is bending over the other way. After publishing two books on foreign policy and completing another equally formidable tome—My Viewpoints: Civilisation, Diplomacy and Democracy (Allied Publishers)—the United Front's one-time consensus prime minister is hard at work on a more personal book: a memoir based on 40 years of diary writing. "This will be a revelatory book," he says about the autobiography he hopes to publish by early next year. The publisher? There's no dearth of takers for the unexpurgated diaries of a former PM.

Like Narayanan, Lyngdoh has decided to wait till he retires as cec early next year before publishing his memoirs. His unofficial publisher, Penguin, is pleased to have reached an understanding with him on the book. Understandably so. A man of many parts, with a deep interest in history and old buildings, Lyngdoh's book is likely to be interesting for both his years in the EC and his life in the bureaucracy, mostly because of his famed candour.

Was it only two years ago when a collective wail went up from the conclave on Indian writing at Neemrana Fort about the pitiful lack of memoirs in India? Our leaders, at least, seem to have heard the call. It's certainly going to be the Year of the iwe on Raisina Hill.

Whiff Of A Mutiny?