Plumb In The Middle 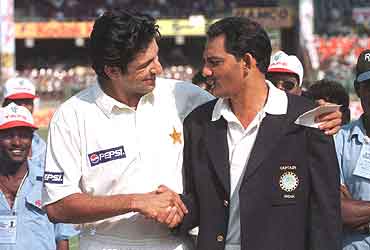 outlookindia.com
-0001-11-30T00:00:00+0553
It was a match which took the cricketing world by surprise. The high-voltage India-Pakistan game during the '99 World Cup in England, played in the backdrop of the Kargil war, had the nation riveted. It was the fourth game in the Super Six stage. On June 6, at Old Trafford in Manchester, India, batting first, managed to score a modest 227 runs. The buzz was that Wasim Akram's men would easily win. But the Pakistan batting collapsed in a heap, scoring just 180 runs in 45.3 overs and India won rather too easily by 47 runs.

That particular match is now the subject of an ongoing inquiry by the Anti-Corruption and Security Unit (ACU) of world cricket's governing body, the International Cricket Council (ICC). The roles of the two rival captains, Wasim Akram and Mohammed Azharuddin, are under scrutiny. A host of other Pakistani players—including Saleem Malik—are being examined for "under-performance" by the ACU. In its confidential correspondence with the Pakistan Cricket Board (PCB), the ACU has suggested that the match was 'fixed' by Delhi-based punter, Ratan Mehta. ACU chief Sir Paul Condon, who sent "classified" letters to the PCB early last year, pointedly refers to the role of Mehta in "arranging the under-performance" of the Pakistani cricketers. In the match under question, Akram was out after scoring 12 runs while Malik was leg before wicket, scoring just 6 runs. Though India never made it to the semi-finals, the 'convincing win' was met with much celebration back home in India.

Mehta, whose name had cropped up during the cbi's four-month-long investigation into match-fixing in 2000, was in close touch with several cricketers, including Ajay Jadeja. As a big-time punter, Mehta was also extremely close to the entire Pakistani team, who have often visited his restaurant Mini Mahal in New Delhi's posh Vasant Vihar. Interestingly, his sister Mona was arrested by the police in Delhi while betting during the '99 World Cup.

In his correspondence with the PCB, Condon specifically refers to a statement given by a high-flying Delhi businessman to the ACU team when it visited India in September 2002. The statement was recorded by the ACU's senior investigator, Alan Peacock. The explosive three-page statement, now in Outlook's possession and part of which has been cross-checked by the ACU, details how Mehta, during his visit to London for World Cup 1999, was responsible for fixing this high-stake game between India and Pakistan.

Incidentally, the businessman who 'knows' Mehta was also in London during the 1999 World Cup. "On one particular visit to London," he says in his statement, "I had a chance meeting with Ratan Mehta. I know this meeting was three or four days before the 1999 World Cup match between India and Pakistan. I was with my friend nears Harrods in Knightsbridge. By chance we met Ratan Mehta, who was with his brother-in-law, Anil Wig, and we invited them to Monty's Cigar and Wine Bar in Sloane Street," he says. However, only Ratan came.

In the bar where both apparently spent over two hours, the businessman says, "I saw Ratan Mehta make and receive in excess of 20 calls on his mobile phone. He had two mobiles with him, one was Indian and one, I think, was British." The statement further adds, "In some of the calls, he was making bets or moving money but others were obviously to cricketers. At various times, Mehta told me who he was speaking to and it included Wasim Akram, Saleem Malik and Azharuddin." And while making these calls, "Mehta was making notes all the time".

The crucial part of the businessman's deposition comes in the second page where he says, "After the phone calls at Monty's, Mehta told me that he had the team of Pakistani players 'sorted' (out) and that India was going to win the forthcoming World Cup match against Pakistan.According to Mehta, he had 10 of the Pakistani players sorted (out) for India to win." The businessman also points out, "Ratan Mehta told me I could bet on it with certainty and that he didn't mind if I advised my friends as well. After Monty's, we went to the China Whites nightclub. Again during the evening, Mehta informed me that India would definitely win the match against Pakistan."

Further, he goes on to say, "Two or three days after the India-Pakistan match, I bumped into Mehta again. This time he was coming out of the Pizza Pomodero restaurant in Beauchamp Place, Knightsbridge. He was with Shane Warne, Brian Lara and another cricketer, whose name I cannot be sure of."

In the statement, he also notes, "I have seen Mehta in the company of cricketers before. Once in Delhi, I saw Wasim Akram in a car with Mehta on their way to a function that was being held for players." The businessman also refers to an earlier incident prior to the '99 match to substantiate Mehta's proximity with Akram. "In September or October 1998, Mehta held a party in Bombay for an international team that was on tour. At the party, women were supplied for the players. This was organised through a woman called 'Lucky' who runs a bordello in Bombay and supplied about 10 to 15 girls for the party. Lucky is well known to many cricketers and is particularly close to Wasim Akram."

Martin Hawkins, the ACU's senior investigator, when contacted by Outlook in London, refused to discuss the details of his unit's investigation, but said, "It is still the subject of an ongoing inquiry. All aspects have been looked at and are still being looked at. The bottomline is that Ratan Mehta is of interest to us and anything anyone has to say of his activities concerning cricket is naturally important." He pointed out that these allegations had "historical value and though it makes terrific reading, it will take a while to get at the truth".

Hawkins also pointed that it was up to the TV channel which has signed on Akram as a commentator to decide on whether to retain him. "There are enough examples where we have stopped employment of players and officials whose names have been (otherwise) recommended in cricketing bodies. But this is a private enterprise and it is up to the company concerned."

In Delhi, Mehta seemed unruffled by the slew of allegations over his role in 'sorting' out the Pakistani players. "There is no value to these reports. When players have been given clean chits, what meaning do these allegations have?" he asked Outlook. On his relationship with Akram, Mehta said: "Sure I meet him. He was in Delhi recently as well. I meet lots of people, I am a social man."

Clearly, the responsibility now rests with the PCB to act on the ACU's classified correspondence and see if it wants to take disciplinary action against the guilty players. The Qayyum Inquiry instituted in 1998, apart from slapping fines on seven Pakistani players, had dismissed allegations of match-fixing. The ICC, though, wasn't satisfied with the findings of the Justice Karamat Bhandari report on the 1999 World Cup match-fixing allegations against Pakistani players. The report had cleared the team of wrongdoing. But in the light of the fresh ACU inputs, it will be interesting to see if the cases are reopened.

The ACU believes the PCB under the chairmanship of former foreign secretary Shahryar Khan will come out with a favourable response, especially with India to tour Pakistan in March. "For years now, the growing cases of indiscipline and team selection in the Pakistani team has left it isolated. This is one chance for it to come good," said an ICC official. But will the PCB do so, that's the glorious uncertainty.