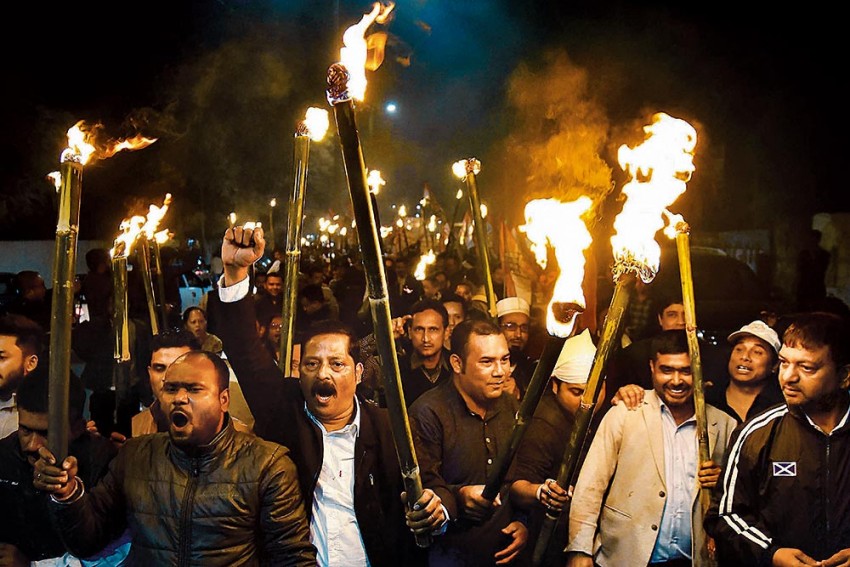 All Fired Up
Protesters march against the CA bill in Guwahati on Tuesday.
Photograph by PTI
Abdul Gani January 10, 2019 00:00 IST Playing With Fire: Citizenship Bill Could Hurt BJP's 2019 Prospects In Northeast 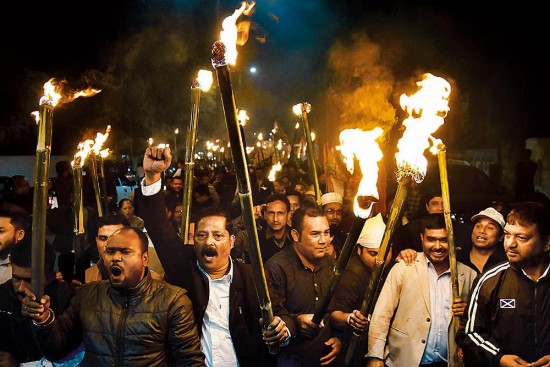 The defining moment of the campaign for the 2014 Lok Sabha elections in Assam, many agree, came at a rally addressed by then prime ministerial candidate Narendra Modi. After May 16, he thundered, all Bangladeshis will be sent back “bag and baggage”. May 16 was the day when votes were counted and Modi’s BJP began its march into Assam, winning seven of the state’s 14 parliamentary seats. Exactly two years to the month, the BJP overran the Congress’s 15-year-old citadel in Assam, storming to power in the state for the first time. Throughout the weeks-long campaign, the BJP’s trump card, again, was the promise to deport all “illegal Bangladeshis”, the biggest and most divisive of all issues in Assam for decades.

Now fast forward to January 4, 2019. At a similar rally in Silchar, in the heart of Bengali-majority Barak Valley, Modi ann­o­unced his government’s resolve to go ahead with amendments to the Citi­zenship Act of 1955, paving the way for granting citizenship to non-Muslim migrants from three neighbouring countries, including Bangladesh (See graphic). The Assamese-speaking natives in Brahma­putra Valley erupted in anger at what is being seen as a “great betrayal” by the BJP. By the time the Union cabinet approved the bill—and the Lok Sabha passed it subsequently—the anger spilled on to the streets, in the form of protests and a daylong shutdown across the Northeast supported by more than 70 organisations.  At least six protesters were wounded in Tripura in police firing.

Illegal migration has been a hot-button in multi-ethnic Northeast, more so in Assam where at least 855 people were killed during a six-year agitation in the early 1980s against Bangladeshi influx. The protests had sparked violence along communal and linguistic lines, including the Nellie massacre of 1983 when more than 2,000 Muslims were butchered in a cluster of sleepy hamlets in central Assam. The killers were never identified but bel­ieved to be nearby villagers, paranoid about losing their home and hearth to “Bangladeshis”, a word used to describe anyone suspected to be a foreigner.

For most Assamese-speaking people, the fear “Bangladeshis” run deep; it’s a primal fear of losing their cultural and linguistic identity and being turned into a “minority community” in their own land due to the untrammeled influx from Bangladesh, both Hindus and Muslims. It’s a fear often seen in the context of Tripura, a tiny state bordering Ban­gladesh, where the indigenous population has been pushed to the political, economic and social margins. For the Assamese, even for a section of hardcore BJP supporters, the religious angle to the citizenship bill defeats all that the Modi government had promised.

“How can religion define who is an illegal migrant and who is not? This religious sel­ection strikes at the very root of the secular characteristics of our Constitution,” says Meera Barthakur, a former BJP spokesperson who was expelled from the party last month for speaking out against the government’s move. “The party’s constitution says the nation comes first, party second and the individual third. For us, Assam is our nation and if our nation is in crisis, everything is gone,” she tells Outlook. Another to quit the BJP in Assam is Mehdi Alam Bora, a former spokesperson, who resigned immediately after the bill was passed in the Lok Sabha. 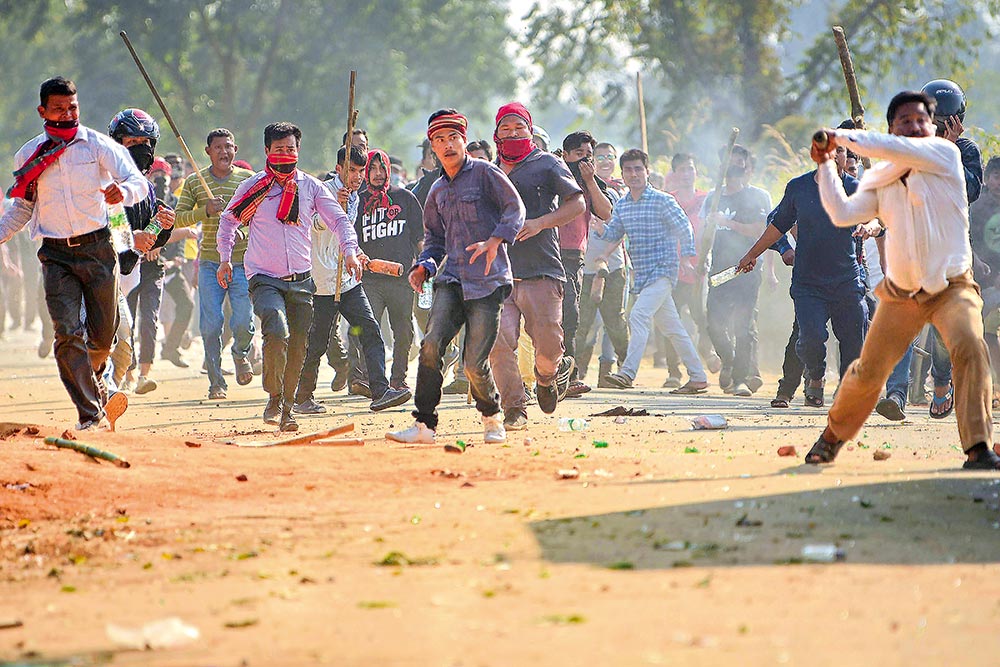 Protests against the bill turned violent in Tripura.

The political backlash for the BJP is significant. Within hours of the Lok Sabha’s nod, the Asom Gana Parishad (AGP) broke off its alliance with the BJP and walked out of the government. Though the government led by chief minister Sarbananda Sonowal is safe, the AGP walkout signals possible realignment of political forces in Assam. In Meghalaya, chief minister Conrad Sangma of the National People’s Party (NPP) has hinted as much. The BJP, with just two seats, is in the ruling alliance of this hill state. In Tripura too, the Indigenous People’s Front of Tripura (IPFT), an ally of the ruling BJP in the state, has opposed the bill. In Mizoram, chief minister Zoramthanga said his party, the Mizo National Front, is against the bill.

“The BJP was hoping the bill will help consolidate Hindu votes in the Brahmaputra Valley, like in the 2016 assembly polls.”

The Northeast is crucial in the BJP’s national scheme ahead of the general elections. Party sources say it is keen on winning as many of the 25 Lok Sabha seats in the region to make up for possible shortfalls in high-stakes states in the Hindi heartland where the party is said to have slipped recently. The BJP was hoping that the bill will help consolidate Hindu votes in the Brahmaputra Valley, like it had managed in the 2016 assembly polls. Barak Valley’s support to the bill gives hope of a windfall in the Lok Sabha polls. A news report quoting an unnamed home ministry official said the Centre decided to go ahead with the bill after Assam minister Himanta Biswa Sarma gave a “personal guarantee” of containing the protests. The report quoted the official as describing the move as a “self-goal” by the BJP in the Northeast, where it had managed to unseat the Congress in every state. Sarma, the region’s key BJP leader, appeared to have stoked the fire when he said Assam will be overrun by “Jinnahs” without the bill, referring to the founder of Pakistan to describe Muslims.

Aman Wadud, a Guwahati-based lawyer-activist, says the bill has been des­i­gned to target the minority community, especially in the context of the National Register of Citizens, which is being updated to determine Indian citizens. “Although the NRC is being monitored by the Supreme Court, it is being executed by the BJP-led government…Now, the BJP will try everything to drop more genuine Indian Muslim citizens from the NRC to appease the majority,” he says. Organisations, representing Bengali-speaking people, support the bill. “We are thankful to Prime Minister Narendra Modi for keeping his words...Some sections are trying to mislead the people that lakhs of Hindu Bengalis will be brought here,” says Sudip Sharma Choudhury of Citizens Rights Protection Forum, an umbrella group.

The Centre attempted to douse the fire—and Union home minister Rajnath Singh told Parliament about a decision to grant scheduled tribe status to six communities in Assam. But it did little to mollify the people. “We welcome the move to grant ST status. But it doesn’t mean we will not oppose the bill. These are two separate things. If the BJP is thinking that they will be able to divert the agitation, they are wrong,” says Hitesh Barman, president of the All Koch Rajbongshi Students’ Union.

Amid the maelstrom, one man’s silence has stood out—chief minister Sarbananda Sonowal. Once hailed as the ‘jatiya nayak’ (national hero), Sonowal has faced stringent criticism for allegedly selling out the state he had vowed to protect. A 70-year-old woman, who joined thousands of others at a protest in Dibrugarh, minced no words. “We don’t need such a CM,” she shouted in Assamese. “What is the point of having him when he cannot protect our language, culture...our identity?” Sono­wal’s silence hangs heavy. As does dark clouds of uncertainty over a state sitting on a time-bomb with a short fuse. And the fuse is lit.

The CA bill vs NRC

‘Brand Laloo’ Has Diminished, Yet He Will Be A Force To Reckon With In 2019 Polls