More from Alka Pande
View All 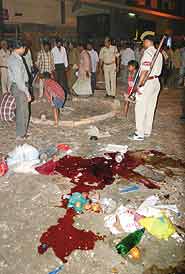 The STF here claimed on April 5 that they have cracked the Varanasi blasts case where over a score of people were killed. Six militants belonging to the Jaish-e-Mohammad and the Bangladesh-based Harkat-ul-Jehadi Islamia have also been arrested. The arrests were made in UP and West Bengal. Alleged mastermind Waliullah, an imam in Phoolpur town of Allahabad district, made some sensational revelations on the modus operandi at a press conference called by the UP police here. This included details on reconnaissance, buying of the pressure cookers used in making the crude time-bombs etc. He also said that the main culprits left for their native Bangladesh after the deed.