Uma Bharati, spurned by the BJP, hits the road. But Ayodhya is a vanvas with faint hope of a comeback. Updates 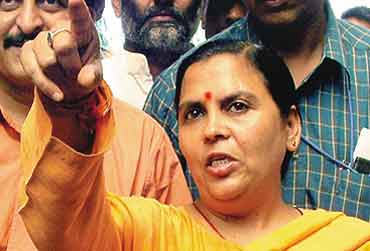 The sanyasin may be cornered following her suspension from the BJP. "Usko mara aur rone bhi nahin diya (they beat her and didn't even let her cry)," says K. Govindacharya. But hard as it may try, the BJP will discover that it is not easy to reduce someone like Uma Bharati to a cipher. The manner in which she has hit the streets in the course of her padayatra to Ayodhya is evidence of her energy and resolve. "I am the real BJP," she thunders. "I want to warn Atal and Advani that the aircraft has been hijacked by a gang."

This could well be Uma's final exit from the BJP. In a sense, it marks the changing face of a party that will soon celebrate its 25th anniversary. K. Govindacharya and Uma were the original pair that planned and rode on Advani's rath in the early '90s. Govind, the brain behind the social engineering project designed to counter Mandal, and Uma, the best campaigner that the saffron party produced, are now outsiders in a BJP being run by new-age netas like Arun Jaitley and Pramod Mahajan.