A brave attempt to present 150 years of India's social, political and cultural history through photographic images 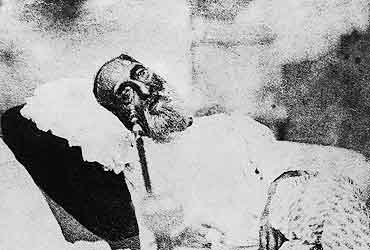 India: The Definitive Images—1858 To The Present
Photo Editor Prashant Panjiar
Introduction by Khushwant Singh
DK/Penguin India Rs 1,250; Pages: 160
This is a brave attempt to present 150 years of India’s social, political and cultural history through photographic images. Images do linger for long in the national psyche but their overuse blunts the edges of perception. Word history and word pictures on the other hand last for centuries. In some ways photography, like films, has an evanescent quality.

Prashant is one of our outstanding photographers and has taken the courage to make a selection of what he calls the definitive images of India from the mutiny of 1857 to the new century. He starts with the very obvious Henri Cartier-Bresson image of Kashmiri women on Hari Parbat in the Srinagar Valley, in an evocative, almost Greek pose, looking at the far hills. The McCurry pictures of steam engines against the Taj, and the Rajasthani women with empty pitchers in a desert storm, the seductively wet bunch of women in a monsoon rain, village children at play, boys diving into the river, and naked Naga sadhus dashing for the Ganges, all evoke the many recognised faces of India.\

The historical photographs are fascinating; that familiar one of the Maharao of Bundi with his remarkable beard and coal-black cobra eyes frightens me. If death has a face, this is it. We all know the famous picture of the last moghul Bahadur Shah in exile in Rangoon. I look at the eyes and see in those defeated orbs the end of Babar’s endeavour. Curzon’s shikar picture by Lala Deendayal has everything of the Raj—the tented camp under the banyan tree, the saheb and his mem standing over a dead tiger looking the conquerors.

But there are gaps. Surely, the freedom struggle was not all Nehru and Gandhi and the well-worn PIB pictures. The picture of Gandhi and the charkha is fine, but the rest? What about the millions of other Indians who struggled across the subcontinent? Like him or not—how can you ignore Jinnah’s giant presence in the first half of the 20th century? The shadow continued one way or the other over the first 50 years of independence. As Stanley Wolpert said, very few people have changed geography in their time. He has. The cataclysmic horrors of partition find no reference, save a picture of a crowded Indian train, which could be any occasion any time anywhere in this overpopulated land.

Also, I don’t see how Mother Teresa—with all her piety—is the lone recurring image of seva in this ancient land. Prashant is simply overpowered by the western media hype. The Phoolan Devi picture is striking—the sideways pose which shows the eye of a caged tigress. But why Rajneesh? Where will he be in 20 years?

There are also too many filmi pictures of passing heroes and heroines, and even a Miss India. I don’t see their relevance as enduring images of this complex land. India is still out there in the dusty villages. Where do they figure? What about the great endeavours of farmers, craftsmen, industrial labour, women in the work force, and the soldiers in India’s perpetual internal and external struggles? And what about sports, not just the middle-class madness called cricket? We have Sachin in his nappies. But who can forget the gazelle-graceful strides of Milkha Singh that linger 50 years after his race in Rome?

Thankfully, the brutal rage and violence that erupts every now and then, sweeping many innocents to their doom finds space—the one of the Ahmedabad young man is very evocative. Needless to say, Prashant’s is a bold attempt. There are plenty of good pictures to see and to remember, but of course all of us would like to make our own albums.

The Pillars Of Asok