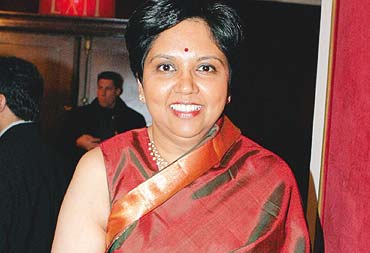 outlookindia.com
-0001-11-30T00:00:00+0553
When Indra K. Nooyi was appointed Pepsico's CFO in 2001, Wall Street observers were willing to bet that the cherubic Chennai-born would be the company's future face. But the usually eloquent and quick-witted Nooyi kept side-stepping questions about her chances of reaching the top during her later visits to India. Now that the news is out—she'll replace Steve Reinemund as Pepsi's next CEO in September—it's still a phenomenal achievement for a woman belonging to a minority community in the US to make it to the rarefied environs of the corner room.

Observers say Nooyi's elevation was due to the faith Reinemund and PepsiCo's board have in her strategic vision and judgement. She was the architect behind the company's restructuring in the late 1990s and early 2000 and the brain behind the decision to divest non-core restaurant businesses like Pizza Hut, KFC, Taco Bell and Long John Silver, and simultaneously acquire foods firms such as Tropicana and Quaker Oats. Thanks to that strategy, Pepsi has pipped arch-rival Coke to the post. In December 2005, for the first time in their bitter 108-year rivalry, Pepsi's global marketcap topped Coke's. And the former's marketshare in the soft drinks business in emerging markets has shot up. This after Wall Street analysts wrote off Pepsi in the mid-1990s, and Coke's then legendary CEO Roberto Goizueta quipped that Pepsi was becoming increasingly less relevant. In fact, Fortune, in October 1996, ridiculed Pepsi with a cover titled 'How Coke is Kicking Pepsi's Can'.

Little did the competitors realise that Nooyi, the little known bean counter of Indian origin, was changing the rules of the cola game. More importantly, she and Pepsi's top management realised that consumer preferences were changing—from carbonated drinks to health drinks and snack products. The single-minded focus Nooyi showed in acquiring the fruit juices brand Tropicana and breakfast cereal maker Quaker Oats showed that Pepsi was more clued into market dynamics. Within a few years, revenues from non-carbonated drinks and the snacks products under the Frito Lays division surpassed those from bread-and-butter carbonated drinks. Today, PepsiCo is recognised as a food major which also makes cola. The company also turned its attention to bottled water and sports drinks much before Coke. Pepsi's Aquafina is today the biggest bottled-water brand, and its sports drink, Gatorade, is a runaway leader with 80 per cent marketshare.

Now, with her Indian background (she holds an American passport), Nooyi will strive to crack the attractive Indian and Chinese markets. In Asian markets, Pepsi, compared to Coke, is on a stronger wicket with double digit sales growth in the past few quarters. But the next step will be to somehow translate Pepsi's vision—to make India one of PepsiCo's global hubs for sourcing and processing fruits—into reality. Fortunately, she has time on her side; she's just 50 and Pepsi, which has had only four CEOs in the past four decades, isn't prone to changing top management structures in great hurry. On the flip side, she has to ensure that Pepsi's current dream run continues. And she has to tackle the obdurate bureaucracy and the slow decision-making process in India to boost the company's Asia-specific strategy. But competition is already sniping at her heels. A stung Coke, still the largest beverages company, will leave no stone unturned to get the fizz back in its business. Last year, Coke appointed Mary Minnick as the head of strategy, marketing and innovation to do precisely what Nooyi managed in the 1990s. So, one's likely to see yet another cola battle—ironically, in non-cola segments—between two women strategists, Nooyi and Minnick.