Pen On The Rostrum 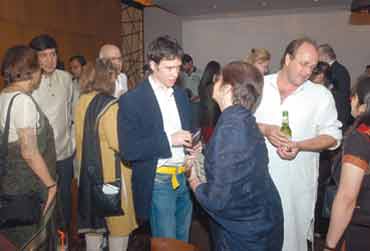 outlookindia.com
-0001-11-30T00:00:00+05:53
Everyone from gas authorities to petrol and cellphone companies, five-star hotels and airlines are suddenly loosening their pursestrings to bring on stage a new kind of rock band: star writers. With the sudden boom in literary festivals this year, organisers are spreading their nets across the world to catch a star writer or two. As the fever spreads, writers are getting a turn to perform live for crowds so large that organisers say they may soon have to sell tickets. At the Kitab Festival in Delhi, for instance, writers like William Dalrymple, Amit Chaudhuri, Nadeem Aslam, Shashi Tharoor, Tabish Khair, Manju Kapur, Githa Hariharan, Vikas Swarup, Tarun Tejpal, M.J. Akbar, Vir Sanghvi, Siddharth Dhanvant Shanghvi, Siddharth Chowdhury and Rana Dasgupta will go up on stage with Goldie Hawn, Aparna Sen, Shabana Azmi and Rahul Bose besides editors and litfest organisers from the UK to provide highbrow entertainment from April 7 to 9.

"India is the hottest thing happening in the literary world," says Kitab's Pablo Ganguli, "and it's high time we had a litfest here that doesn't have the same people with the same drink in hand." Ganguli, who also runs an annual litfest in Marrakech and a British-Arabic litfest in London later this year, claims Kitab is different. "It's non-bureaucratic and open to the public."

True, litfests held in India have mostly been government-sponsored junkets for authors and publishers networking in exotic locales. Four years ago, ICCR's famous Neemrana litfest was a mild departure, with the media allowed to press an ear to the keyhole during the closed-door deliberations. But it was sparring A-list writers who provided the high entertainment. Post-2002, litfests sprang up sporadically and disappeared just as randomly. In the last three months, however, at least two out of the four litfests held so far—Katha Utsav and Jaipur literary festival (both in January)—ended with a promise to return next year bigger and better. "There's a boom in Indian litfests this year," says Pramod Kumar of the Virasat Heritage Foundation which ran a modest three-day event in a Jaipur heritage resort that attracted writers like Dalrymple, Hari Kunzru, Shobhaa De and Pavan Varma, pulling in crowds.

Of course, neither of these two nor the more ambitious Kitab fest are a match for the galas held in the West. In the UK alone, there are 207 litfests every year, "from 20-seater village affairs to big-tent international affairs", as former literary editor of The Sunday Times and a delegate to the Kitab fest, Geordie Grieg, pointed out. The biggest of them all, the Hay festival, held in a tiny town on the Welsh border called Hay-on-Wye, sells over 1,20,000 tickets a year. Hotel bookings for the next year start the day the festival ends. Hay's attraction, according to Grieg, is in its potent mix of the best writers in the world (Arundhati Roy was invited to Hay long before winning the Booker, Salman Rushdie stole in during his fatwa days, V.S. Naipaul broke up his friendship with Paul Theroux there) and in the camaraderie that builds up between writers and festival-goers.

There's no reason why we can't have an annual mela like Hay, or even an assortment of them, say litfest organisers. One problem is dearth of star writers. And the few we have played hard to get, as the ICCR discovered when it organised the second Neemrana litfest this February. How do litfests abroad get past writers' globe-trotting schedules and starry reluctance? "By paying a fee for each appearance," claims Ganguli. Bill Clinton, according to him, was paid 1,00,000 dollars to make an appearance at Hay. If not as high, the price for getting Rushdie or Naipaul to a litfest is certainly no cheaper than hiring a rock star.

So far, litfests here are unusual—and exotic enough to attract a respectable clutch of A- and B-list writers. Ganguli claims he had no problems getting the world's best to appear at his litfest for the price of a plane ticket and hotel accomodation: "We had to turn down at least 20 writers and top publishers who wanted to come, because we didn't have the funds for flying all of them down. Everyone recognises the steam in India and they all want to come here to network and see an India which is not just Janpath and shopping."

And if there aren't enough stars, there's a trickle-down effect that's fuelling the spurt of litfests. Explains poet K. Satchidanandan, secretary of Sahitya Akademi: "The star power of an Arundhati Roy or Vikram Seth is overflowing to other writers, including regional ones, in a way that has never happened before. More writers are being called to perform than ever before." It's a trend that not everyone welcomes. Playwright Vijay Tendulkar, for instance, deplores the "vulgarity" of these sponsored events. "Writers are being reduced to mere performers," he says. Of course, not all writers have what it takes to be a performer. "Some of them are disastrous," says playwright Girish Karnad. What they need in these performance-oriented times, according to him, is training. "Professional actors routinely go for speech training. Why can't writers?"

And till writers learn to perform well, litfest organisers are leaning on elements like film shows, story-telling and interactive sessions to draw in the crowds. The six-day Katha Utsav, for example, brought in slum women to interact with Delhi's chief minister Sheila Dixit, and took the 150 writers and academicians from across India and Asia to experience life in the slums first-hand. It worked. "We deliberately widened the net so that writers could come face to face with slum communities. These are snapshots of life they don't get to see first-hand," explains Katha's Geeta Dharmarajan.

Finding sponsors to fund these events—costs range from a modest Rs 5 lakh to the almost Rs 38 lakh that Kitab will end up spending on its current jamboree—is one reason why litfests hunt desperately for star writers. But it needn't always work that way. Notes Dharmarajan: "If you can attract crowds, sponsors don't care about star writers. At our litfest this year, there was not a single star in the conventional sense but we had no hitch finding the funds for it." The real problem, according to her, is finding the right venue for events that spread through 6-10 days late into the evening. "There's no place in Delhi that's large enough to accommodate the kind of crowds we want to attract. Sadly, none of the venues we've tried so far will allow us to put up food courts."

Selling tickets may be the only way to raise these litfests into the boom industry that it has now become in the West. Many here are now toying with the idea. "What the public enjoyed most in the Jaipur fest was the interaction with writers. They are willing to pay for that," says Virasat's Pramod Kumar. But how much? "Writers are not yet Bollywood stars for readers to shell out Rs 200 to hear Naipaul talk," he admits. But there is a market that's waiting to be tapped, according to everyone who has ever run a litfest. As Dharmarajan points out: "Ticketing may not work in Delhi perhaps. It's a spoilt city—gets everything, dance, music, culture on a platter. But if we were to hold a litfest in, say, Chennai, where there is a culture of paying for entertainment, then tickets would sell."

The idea, it seems, has arrived. Watch out for the litfest epidemic next year.

"TRAI's Teeth Will Be To Chew, Not Bite"