The Olympics will overlay patriotism with cosmopolitanism, and illumine old Beijing 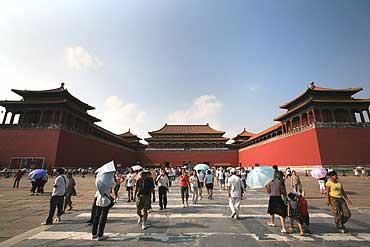 There are many guidebooks that offer good suggestions about things to do in Beijing. My goal here is not to replicate what they do well, but rather outline a special sort of two-day itinerary, custom-made for historically minded, culturally curious visitors heading to the metropolis next month. I’m assuming that, with the historic first Chinese Olympics on their minds, even when taking a break from watching sporting events, such tourists will be particularly interested in sites that reflect, as the Games so often do, the complicated ways that cosmopolitan and nationalistic currents converge and diverge as different cultures alternately come together harmoniously or clash. If I’m right, these imagined Beijing-bound travelers are in luck. For China’s capital has long been and remains a place full of sites that offer intriguing windows onto global cooperation and global conflict and the many faces of both patriotism and its ugly cousins, virulent nationalism and jingoism.

For the first day of the tour, visitors can stay in the heart of the city and visit a pair of famous locales. The first is Tiananmen Square. This giant plaza testifies to Cold War-style global influences, inspired as it was by Moscow’s Red Square. But its monuments and museum displays have a decidedly patriotic cast, detailing as they do the anti-imperialist struggles the Communist Party takes credit for leading and credits with bringing Mao to power in 1949. 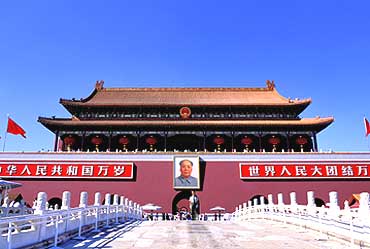 What visitors won’t see marked, but will surely be thinking about when at the Square, is a different struggle that speaks patriotic as well as cosmopolitan themes. Namely, that of 1989, which peaked with giant rallies in the Square and ended with a massacre of students and workers on nearby streets. At the height of that movement, Tiananmen was packed by internationally-minded but also intensely patriotic youths, whose protests were accompanied by a wonderfully eclectic global soundtrack, which ran the gamut from rowdy Chinese rock songs to Beethoven’s "Ode to Joy," from a retooled versions of "Frère Jacques" with lyrics mocking Deng Xiaoping to "Children of the Dragon," a folk anthem with a strong nationalistic edge.

To complete this first day, my imagined tourists would step backward in time by venturing into the Forbidden City that stands next to Tiananmen Square and also has contradictory elements worth pondering. Disparaged by Mao as a vile symbol of feudalism, this vast complex of palaces and gardens was once the sole preserve of the imperial family and the eunuchs who served them. It has recently—and surprisingly—been recast in the Chinese imagination as a site to be venerated, the notion being that its elegance and grandeur reflect the nation’s aesthetic achievements and skills in craftsmanship. This explains why the Starbucks outlet that stood at its edge was forced to close recently, after popular complaints that its presence was sacrilegious, something that would have made Mao shake his head in wonder, as he had been convinced that the grounds were polluted, not holy.

Foreign visitors interested in history should keep in mind one group of outsiders whose footsteps they are retracing when snapping photographs of throne rooms and the like: soldiers from many lands (including Indians serving in the British army) who came to China in 1900 as part of a grand collaborative military enterprise to quell the bloodthirsty anti-Christian Boxer Rising. Angry at the Qing Dynasty for hailing the Boxers as patriots trying to save the country from evil pests, the soldiers who put down the rising in the name of "civilization" took revenge against China and its rulers by rampaging through villages (sometimes committing bloodthirsty acts that matched those of the "uncivilized" Boxers), looting the Forbidden City, and posing for photographs on the thrones of the palace.

On Day 2, visitors interested in the cosmopolitan and patriotic sides of Beijing’s past and present should venture away from the city center to the northern Haidian district. This is home to China’s most celebrated university, Beijing Daxue ("Beida" for short, and known in English as either "Beijing University" or "Peking University"). Haidian also, not surprisingly, contains some of the best places to go to get a sense of what Chinese are reading these days, with the massive Disanji Bookstore near Beida a noteworthy case in point. 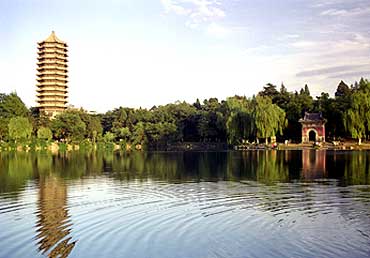 Beida is descended from an academy founded exactly 110 years ago by the 1898 Reformers, cosmopolitan-minded scholars who briefly gained the ear of a young Chinese Emperor. They convinced him that to save his empire, which was being bullied by Western powers and the rapidly modernizing Japan, he needed to take dramatic steps to open up to outside influences. The Reformers fell out of favor after just a few months—earning their movement its name, the "Hundred Days of Reform"—thanks to coup against the Emperor staged by the same conservatives within the imperial family who would later encourage supporting the Boxers. Still, the academy they founded to spread foreign learning lived on and evolved into a renowned university.

Parts of the campus, which includes a picturesque lake, are lovely to walk through even if one knows nothing about its history. Familiarity with the school’s storied past can, though, give an added dimension of enjoyment to exploring it. Many leading participants in the 1989 protests came from Beida, as did central figures in the great student-led struggles of 1919 and 1935, which were similarly shaped by both cosmopolitan and patriotic forces.

In addition, Beida played host to the philosophers John Dewey and Bertrand Russell when they came to Beijing after World War I to lecture to the iconoclastic young Chinese teachers and college students spearheading that era’s New Culture Movement. And to the poet and philosopher Rabindranth Tagore, when he made his 1924 Chinese speaking tour.

Tagore, like Dewey and Russell, had his Chinese acolytes. As Pankaj Mishra reminds us in a recent New York Review of Books essay, however, his lectures met with a far more critical reception than did those of Dewy and Russell. Why? Because some members of the largely anti-Confucian student generation of the time did not like to be told by the sage from across the Himalayas that they should cleave to their indigenous traditions rather than embrace Western creeds.

Contemporary tourists will look in vain, though, for any evidence of this resistance to Tagore. The only reminder of the Nobel Prize winner’s visit is a bust of him that the Indian government gave to the university recently to celebrate past and present harmonious exchanges of ideas between Asia’s largest countries.

It would be easy to conclude, due to the many recent headlines about virulently nationalistic Chinese youths, that cosmopolitan currents are a thing of the past at Beida. A visit to the Disanji Bookstore, though, should encourage some skepticism about this notion—and provide an apt ending to our imagined two-day tour. Its shelves certainly contain many works celebrating China’s past and present accomplishments. But they are also filled with plenty of books on international themes that suggest there is a healthy curiosity among students and other Chinese readers about the world beyond the nation’s borders.

It is true that censors check some tides from abroad: books by the Dalai Lama and Chinese dissidents in exile are still banned in Beijing. But it’s easy now to find translations of the most famous works by Bertrand Russell and John Dewey, as well as by contemporary non-Marxist and even anti-Marxist thinkers.

Works by Tagore may prove hard to find, even though his notion of valuing indigenous Asian traditions fits the current era when Confucius’s stock is riding high again in China. But Disanji’s patrons have no trouble buying copies of the most famous writings of another Nobel Laureate with ties to India—and to Beida (he spoke there in 2006). For Amartya Sen is one of the many foreign writers whose books have found a sizable Chinese readership in this confusing and fascinating era of the first ever Beijing Olympic Games.

Jeffrey N. Wasserstrom is a Professor of History at the University of California, Irvine, who contributes regularly to a group blog called The China Beat, and is the author, most recently, of China's Brave New World (2007) and Global Shanghai, 1850-2010 (due out later this year).