After successfully containing Bush's 'mad cowboy disease', the west's enlightened public should urgently turn its attention to Saddam. That's the only way out. 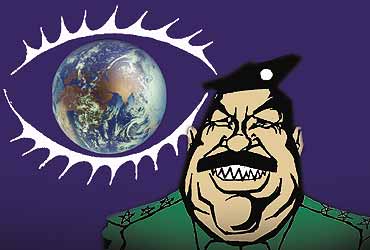 outlookindia.com
-0001-11-30T00:00:00+0553
That the war on Iraq has been stalled is a tribute to the power and beauty of western democracy. It's the ordinary citizens of the western world who inspired the entire international community to affirm their will. They didn't want war. So they poured out into the streets and said so. Forcefully, effectively, but peacefully. It is testimony to the power of the western civil society. Here is a group of people who don't blindly follow their government's aims, are too intelligent and well-informed to fall prey to official propaganda, make up their own minds, hold on to important values and then come out of their cocoons to do something about it: they were sending chain e-mails, using the Internet to nail government lies, organising street demonstrations, holding seminars, making themselves visible and heard.

Across the US and Europe—from ordinary citizens to celebrities, from an unknown Kentucky waitress to Hollywood actress Susan Sarandon—citizens had the courage to stand up and be counted, even go publicly and vociferously against their own governments because they are secure in the strength of their own democracy. They are confident they won't be hounded and persecuted by their governments. There's genuine space for democratic dissent. There are enough checks and balances to prevent official victimisation of individuals and corporations who rub the authorities the wrong way. Anti-Americanism is a loose and misleading label. America, the land, the people, its values and system is possibly the most admired and loved in the world. But the international community turned against the Bush government's aggressive, arbitrary, hypocritical, insensitive foreign policy, derisively described by protesters as the "mad cowboy disease".

But even the Bush administration had to finally heed the international will. The stalling of war also proves that western governments have to be sensitive to their people's sentiments. If France took such an impassioned and principled stand to give peace one more chance, it was because they had the solid support of French citizens, who have always backed noble ideals such as liberty and liberal values, including coming out at the most critical time to democratically bowl out their own racist, right-wing leader Le Pen last year.

This is in stark contrast to what's happening in Iraq. From all accounts, Saddam Hussein is a cruel tyrant. Demonstrations are stage-managed. If Iraqis want to protest against Saddam, they must put their life on the line. There's no pressure on Saddam to bow to public will. He's not answerable to anyone. This accounts for the fact that all international protests against war have been directed against their own governments or specifically against the US.

It's time we all started turning our attention to Saddam, the "villain of the peace". Global chain e-mails, public protests, civic action, human shields must now be directed towards him to do one of two things—either he must go into exile or he must comply as per UN Resolution 1441 and disarm fully, totally and quickly. We have won only a breather. We have not achieved peace, we have only put war off for about a month. And then, let's face it, it's war if he doesn't comply. Even France—which has now wrested moral leadership from the US—will not be able to prevent war if next time around the UN inspectors declare they have not got the required cooperation from the Iraqi authorities. After all, UN resolution 1441 was unanimous. The world, and not just the US, wants Saddam Hussein to disarm. If he has nothing to hide and can account for the unaccounted WMDs, then he must abide by international will and cooperate whole-heartedly.

There is some truth to Colin Powell's assertion that Saddam Hussein has been stringing the world along.There is also merit in the argument that strengthening the inspections regime alone will not achieve the UN goal. For the inspections to be successful, Saddam must show political will to comply. Public pressure and the role of France, Germany, Russia and China in particular have succeeded in restraining the US. They exerted pressure, not because they merely want to poke the US in the eye or because they endorse Saddam's policies, but because most people are genuinely against war and its horrendous aftermath. If the anti-war sentiment is to be taken to its logical conclusion of avoiding war, then the only way out now is to turn the spotlight on Saddam. It would be a mistake to let him off the hook.

For good reason, Saddam doesn't have a single friend in the world. Not in the western world, not in the Third World, not in the Islamic world, not even in the Arab world. In fact, the only thing that unites George Bush and Bin Laden is their hatred for Saddam. Yet, this is a man who has held on to power through sheer ruthlessness. In his heyday, he had taken Iraq to a crest of secularism and development, but he has since plunged his nation into a trough of war, deprivation and devastation. From all biographical accounts, Saddam is a man who feels the world denied him his due recognition. He can avert war and spare not only Iraq but the entire world of tragic consequences if he instals a more acceptable leader and voluntarily goes into exile. Or he can ensure that his regime cooperates fully with the UN inspectors. He will be remembered forever as the man who spared the world of a horrendous war that would ruin and unravel his country, destabilise West Asia and damage the world through terrorism and economic recession.

The same levers of western democracy—people, ngos, civil society—must use all the ideas, technology, commitment and energy they have displayed so far to restrain the US to now urge Saddam into compliance. Only then can war be averted. It takes two to tango and it's Saddam's turn now.

(The author can be contacted at post@anitapratap.com.)

Waiting For The Good Fight