Pawns On The Board 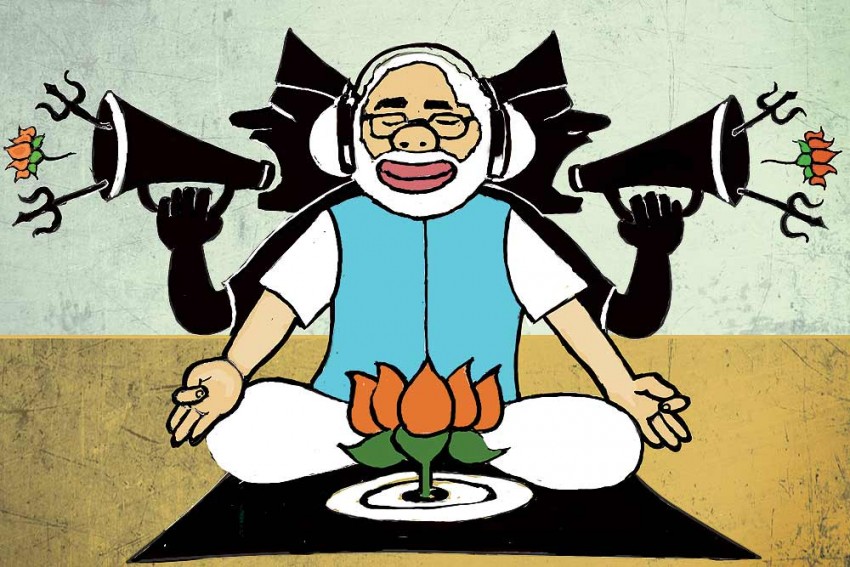 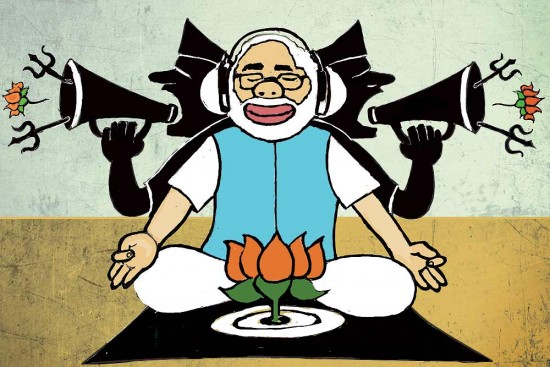 Political leaders often speak in code. Their followers are expected to pick up the signals and take action. Over the years, the Bharatiya Janata Party has developed its own coded language, with Narendra Modi certainly as one of its best practitioners. As a campaigner, in the last as well as in previous elections, he perfected the art of using the mot juste to put his message across—Miyan Musharraf, baby producing centres, biriyani... These were all barely concealed euphemisms for Muslims and the most loyal BJP followers didn’t detest it at all.

During the last Lok Sabha elections, a BJP candidate mentioned that those who were opposed to Narendra Modi would all have to leave for Pakistan after the elections. Why Pakistan? Well, it is because that is the homeland of Muslims.

However, the situation has changed after the elections. Narendra Modi has taken a vow of silence and has issued instructions to ministries to keep pesky journalists away. Senior ministers and former spokespersons currently members of the government, prolix in the extreme at one time, have suddenly run out of opinions to express in public.

So not only do we not get any explanation of the many U-turns that this government has taken, whether it is on Aadhar, the Henderson Brooks report or the opening up of FDI in the insurance sector, we get no comment on the small Hindutva bush fires that are breaking out all over the country. A Muslim techie gets murdered in Pune by a mob simply because he was wearing a skull cap, a minister in Goa declares the prime minister will create a Hindu Rashtra, the curriculum in Gujarati schools gets an injection administered by Dinanath Batra, whose collected thoughts include some radical theories about how to beget a child (pray to Mother Cow). Add to this the thuggish behavior of an MP from BJP ally Shiv Sena, who, unhappy with the quality of food, shoves a chapati down the throat of a hapless canteen manager, who happened to be a Muslim observing Ram­zan. The frightening thing is not just that these things are taking place but that there is no condemnation issued by the highest quarters of the land. One statement from the prime minister or any of his colleagues would send a sharp message to any potential trouble-maker that no attempt to create communal tension will be tolerated; in the absence of any such assertion, one can only assume that nobody sees anything wrong in all these recent unfortunate events.

Not all infractions are of the same seriousness. The nutjobs who want pubs banned in Goa are not in the same league as the killers of the young techie in Pune; the xenophobic and racist Batra model of history, which informs us that everything from cars to stem cells were first invented in ancient India, is limited only to Gujarat so far.  But there is a pattern that is emerging—an attempt to redefine the nation and to move it away from the secular and inclusive entity it has been so far. Crazies existed in the past too—‘Historian’ P.N. Oak used to write about how the Taj Mahal was actually a Hindu temple, but no one took him seriously. Batra has official backers and his history lessons are now being incorporated into the syllabus.

Such official benediction is nothing less than a dog whistle to the devoted believers. Each gets the signal to do his bit for the larger cause. While a Batra wants to alter the history books, a Muthalik is also determined to tackle the pub-goers. Both want to impose their own version of  the Hindu culture on the rest of the country, to redefine the contours and the detailing of Indian nationhood in the shape of the Hindutva mould. Whether it is in the garb of introducing schoolchildren to the glory that was Bharatvarsha or banishing ugly western influences, the end game is the same. Every time the state looks the other way, the whole nation should be struck with fear.

One of the observations made by pundits and analysts is that the Modi government has continued with several of the UPA’s policies, especially on the economy and foreign affairs. Supporters who had vocally backed Narendra Modi as the completely new broom who would sweep away archaic economic management are now disappointed—this is just old wine in a new bottle, they say. But that is a red herring. The real changes are coming in social, educational and cultural policies, which are vastly different from earlier governments. Here, the Modi government and its followers have a very clearly defined agenda and they are in a hurry to implement it. This is not a five-year plan but a very long-term game. The troops were already in place; now they have been swung into action. The silence now begins to make sense.

A Case For Swatantra