Path Yet To Take A Turn

Reactions to the Kannada editor’s killing continue to be loud. The investigations have made no headway. 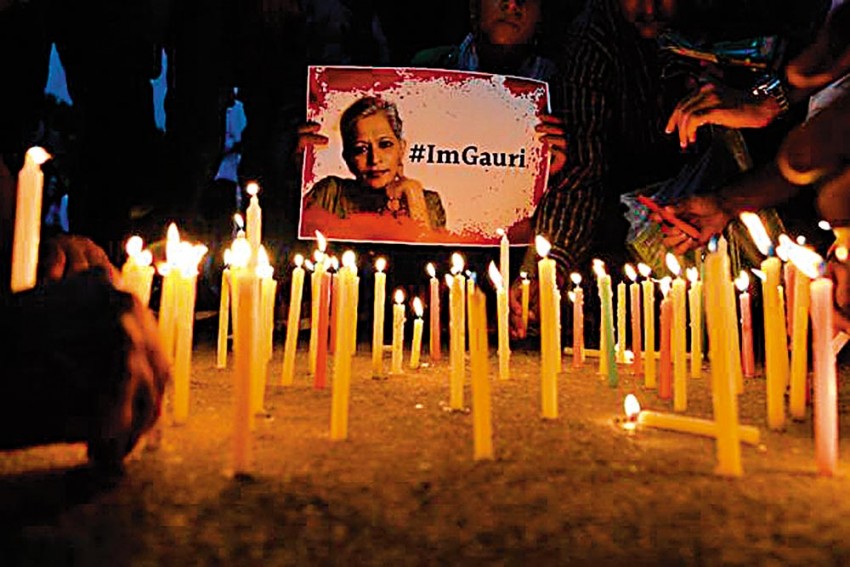 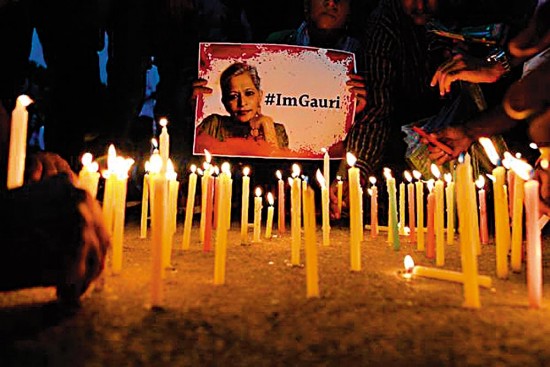 Filmmaker Kavita Lankesh remembers going for a walk with her journalist father in the famed Lalbagh gardens of their city in early 2000. The weather was pleasant—and someone came up to them, wondering why P. Lankesh, as a top editor, didn’t have any security. At this, the sexagenarian laughed, saying, “Why would I need security? I’ve just come for a walk.” Today, when Kavita recalls the episode, she cannot but make a connection, even as she copes with the murderous attack on her sister, Gauri Lankesh.

Their father who ran the eponymous weekly Lankesh Patrike hurt governments with his writing and made several people angry, she says. “Nobody, how­ever, threatened him. People would come in gro­ups and you would know who is protesting and their ideology also. Not like this...hidden. I know she was doing a lot of activism work and all that, but I never thought she was bigger than my father in that way.”

The shocking murder of Gauri on September 5 has sparked outrage across the country and protests, vigils and marches held thr­ough the week to condemn the crime. So far, the Karnataka police have not been able to identify the killers though it has mounted a massive operation to investigate the case—the special investigation team is over 70 strong comprising offi­cers and personnel drawn from across the state. The investigators, it is understood, are expecting a ballistics report soon and are parsing through CCTV footage collected from various sources. Gauri was shot dead after 8 pm outside her home, Manushi, just as she had returned from work.

Rajarajeshwari Nagar, the locality where she stayed, is at the south-western end of the city, quiet and leafy with birdcalls and hardly any sound of the traffic even though it is close enough to the busy Bangalore-Mysore highway. Residents in the locality say the lanes are usually empty, more so at night. “People don’t walk around much after dark,” points out one resident. There are reports that Gauri had, a couple of days before she was killed, noticed a person lurking around her house.

Initial reports suggest that a 7.62-mm country-made pistol was used in the murder. To be sure, there’s speculation about the similarities with the attack on Kannada scholar and wri­ter M.M. Kalburgi who was killed by two motorcycle-borne men at his home in upstate Dharwad two years ago. 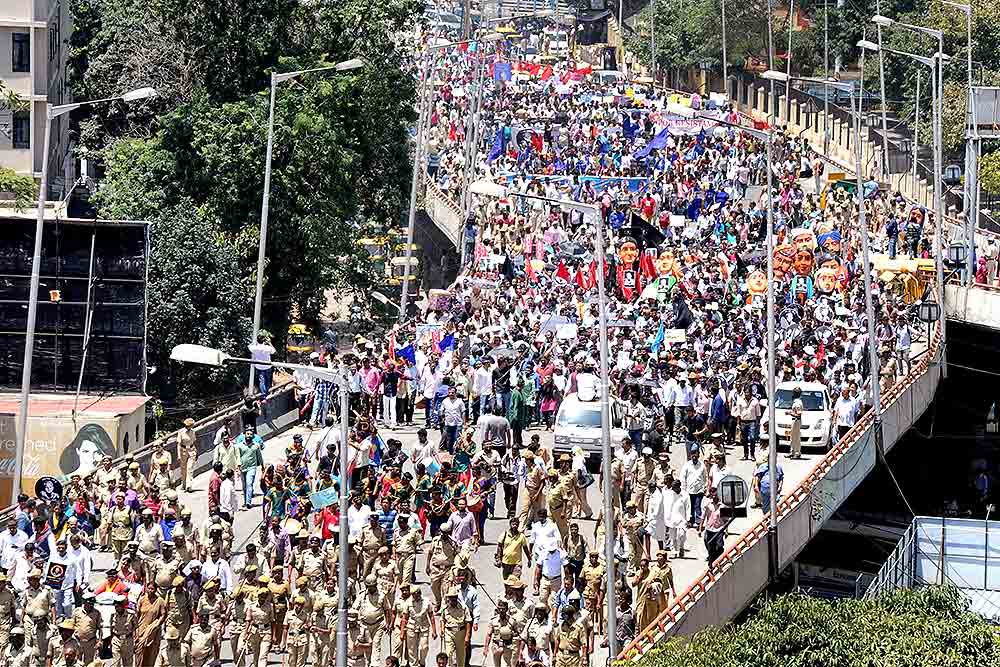 Protesters stage a rally in Bangalore against Gauri’s murder

There’s been plenty else happening, however, even as the investigation goes on. Earlier in the week, the Karnataka BJP’s Yuva Morcha sent a legal notice to historian Ramachandra Guha for his comment suggesting that the Sangh Parivar was likely involved. “In India today, independent writers and journalists are harassed, persecuted, and even killed. But we shall not be silenced,” Guha said in a tweet. Then, some former Naxals whom Gauri had helped to bring into the mainstream, argued that her efforts in that direction had nothing to do with her killing. All the while, social media has been awash with opinions left and right, attacks, counter-attacks and of course, no small measure of acrimony.

“Though they tried to silence her, other voices have risen up because of her and so many people have come out in support. That’s what gives me some kind of solace,” says Kavita, who helped bring out a special edition of the Gauri Lankesh Patrike, the Kannada weekly her sister ran, with the headline Nanna dani adaguvudilla (My voice will not be silenced). “I was there to oversee the whole thing. It was the first time I did the job of an editor in that sense,” says Kav­ita, who had never been involved with the running of the publication.

At a rally to seek justice for Gauri in Bangalore on September 12, their mot­her Indira broke down as she addressed a few thousand people who had gathered. “I had wanted my daughter to be an engineer. She chose to be a journalist and she was truthful to her profession. I’m proud of her as I am proud of you all. You are all my Gauri,” she said.

Activist Teesta Setalvad recounted how Gauri had the cheek to call her ‘little sister’ though they were both the same age. “As everybody has been saying for the last one week, the only thing bearable about her being killed is the support that has come after her death. We can’t let this support and cohesion go in vain,” she said, teary-eyed. “She was her father’s daughter, but she was so much more...she was fun.”

“But one thing that she stood for, above everything else, was a rational outlook questioning caste, questioning exclusion and believing that this country is a country of the questioner,” said Mumbai-based Setalvad at the meet that brought together activists, poets, religious leaders, musicians and artists, and of course, political accusations.

Over the week, several people from various languages have come forward to translate Gauri’s pieces into English, says her sister.

“Some years ago,” said poet and playwright Chandrashekar Patil echoing the slogan of Naanu Gauri (I am Gauri) that rang through the meeting. “I was Narendra Dabholkar, then I became (Govind) Pansare. Just two years ago, my classmate, colleague and comrade Kalburgi was assassinated. Then, I became Kalb­urgi. Just the other day, I became Gauri.” Sitaram Yechury, general secretary of the CPI(M), said the idea of India is something absolutely concrete and alive. “And, it is that the diversity we have in our country can coexist only if we give equality of opportunity to speak, discuss, debate and disagree. But that cannot lead to the use of bullets to kill and to murder. We lost a very vibrant thinking individual,” he added. “What has happened to Gauri is definitely not an isolated incident.”

Some former Naxals, whom Gauri had helped to bring into the mainstream, argue that her efforts in that direction had nothing to do with her killing. That angle was also something hinted at by her brother Indrajit Lankesh with whom Gauri initially ran their father’s weekly after his death in 2000. The siblings fell out a few years later, reportedly over Gauri’s focus on Maoists, which led her to start her own publication in 2005.

Kavita says she is heartened by the fact that the government has enlarged the special investigation team, putting more cops on the job. “All I can say is that we hope for the best and that the killer and the main person behind that is found,” she says. Over the past week, many people have come forward to translate Gauri’s pieces, which were so far restricted to Karnataka, into various languages, she says. “So you are trying to silence this voice and it is growing so much more louder now.”

“India Does Not Need Anyone To Give It An Afghan Role. It Has One By Virtue Of Its History.”