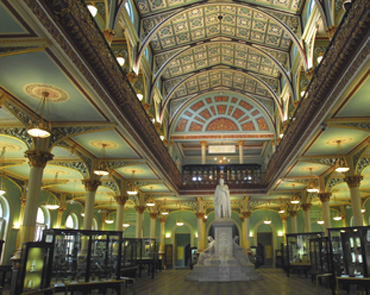 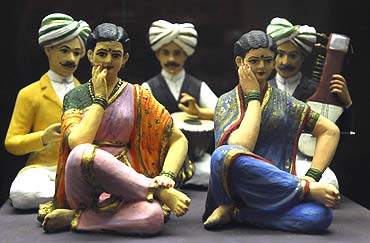 A depiction of Mumbai's old music and dance culture

Tucked away on the first floor is another case of exhibits—little clay models showing various occupations that characterised the city. Amongst a host of occupations that drove the informal economy are "street vendors", as significant to the city today as they presumably were when it was first founded; "thugs" which shows that extortion in some form or the other has been as much a characteristic of the city as its industriousness; and "battiwala chowkidars" who later transformed into night beat-cops or lately private securitywallahs. Down the passageway is another set of meticulously restored exhibits—one showing a surface drainage relief map of Bombay circa 1882, another one with the first-ever textile mill set up in Worli, with a companion relief map that shows the entire central Mumbai stretch of textile mills as they developed and created the impetus for the city to grow, and a fourth relief map circa 1934 that details tramlines, roads and trainlines in the then commercially-expanding city.