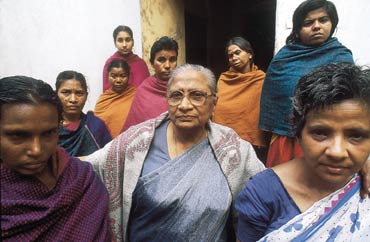 outlookindia.com
-0001-11-30T00:00:00+0553
Every society has its outcastes. And the space that was once occupied by ‘lepers’, during the middle ages, has now become the domain of the mentally ill. Cut off from the field of ‘normal’ human interaction, many of the chronically ill spend their lives ostracised by the society and their families—often confined for excruciatingly long periods in mental hospitals. The problem is worse for underprivileged women patients.

Dr Joyce Siromoni, disturbed by this isolation, decided to float a half-way home for women who have been confined in jails/mental hospitals. Her West Bengal-based non-profit, non-voluntary organisation, Paripurnata, prepares them for rehabilitation and helps them integrate into the wider society.

Siromoni, a specialist from Vellore, was always an active social worker. She was closely associated with nimhans, Bangalore, which worked in the area of suicide prevention and rehabilitation of the mentally ill. She settled in Calcutta in 1985 and continued with her social work. But the direction of her philanthropy was in for a big transformation. In 1990, she came across an article run by a leading daily informing its readers about the plight of the mentally ill languishing in jails. Without hesitating even for a moment, Siromoni immediately visited the jails and was shocked—people locked in dark, dingy, unhygienic cells for years on end without having committed any offence.

She made up her mind to give them a home that would assure them the dignity of a human being. On March 20, 1992, the 12-member strong Paripurnata was born. A portion of an old dilapidated building, belonging to the Probation and Aftercare Association, left unused for 25 years, was renovated. An initial funding of Rs 10 lakh came from Juthica Stangl, a resident of the US. An ex-convict, who had a good report of her prison term, became the first house mother of Paripurnata.

After the April 6, 1993 Supreme Court judgement that mentally-ill persons in West Bengal should not be put in jails, Paripurnata shifted its focus to mental institutions. Mental hospitals are relatively better than jails but then individual attention is a problem even in these places because there are far too many patients in each one of them. Here is where the residents of Paripurnata have a distinct advantage. Siromoni’s home selects eight women at a time from Calcutta’s Pavlov mental institute. They then undergo intensive treatment for a period of nine months. Paripurnata handles many kinds of mental patients, but cases of schizophrenia and manic depressive psychoses are most common.

The home identifies its inmates not as mental patients but purely as its residents. They are regularly provided psychotherapy and are encouraged to learn decision-making. Basic household chores are also taught. They are made self-reliant through occupational therapy and learn vocational skills so that they can earn their livelihood. Creative pursuits like dance, music, painting, etc are also encouraged. Paripurnata functions with the help of full-time staff as well as volunteers. They are either counsellors, psychotherapists, psychiatrists and social workers, or are instructors in professional skills like sewing, weaving, gardening or in cultural training, yoga, women’s rights and current affairs. The management includes former superintendents of mental hospitals, doctors, an advocate, social workers, chartered accountants, housewives and HRD consultants.

Needless to say, Paripurnata has been a success. Fifty-eight women have been rehabilitated. Six women have joined their husbands, four got married and the rest have been accepted by their paternal families or are staying at hostels. Siromoni, though 70 years old, visits and supervises Paripurnata daily. She has a message for the society: "Let people with mental problems be treated with human dignity. Free yourselves from prejudice and come forward to help. Please don’t call them lunatics. It is a misconception that they have no feelings or talents." The West Bengal government has now granted Paripurnata 13 cottahs of land near Baghajatin, Calcutta. The organisation plans to relocate and expand to accommodate 30 residents at a time. You may visit Paripurnata and help befriend the residents, with concern or by donating towards the fund. Simply contact Dr Joyce Siromoni (secretary), Paripurnata, 5-B Maharani Swarnamoyee Road, Calcutta 7000 009, phone: 033-350 4073.

The Necessity of Peace