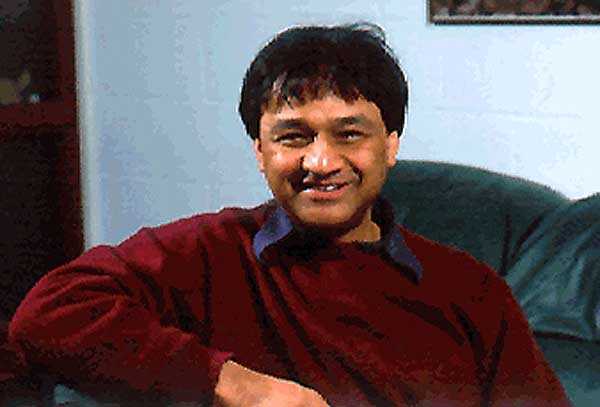 It is not easy to review the “collected poems” of any poet worth his salt in 750 words—though it is remarkable how little salt so many of them get by on! It is practically impossible to review the collected poems of a much-loved poet who is struck dead in his prime—the too-soon-collected oeuvre acquires a kind of retrospective immunity. It is entirely of a piece with Agha Shahid Ali’s legendary generosity that he makes this task so easy.

Because there is really very little to be said about The Veiled Suite, Agha Shahid Ali’s collected poems, beyond this: go get it! Ali was crafting a remarkable poetical career when he was diagnosed with a brain tumour. That he continued to practise his cunning craft even under the shadow of that diagnosis is a tribute to his courage. But it is important to rescue his poetry from under that marmoreal fate. Because Ali’s poetry is diverse, playful, mischievous and even under the imperative of a demanding history—sad Kashmir—graceful, along with being melancholy and, yes, angry, too.

From its beginnings in early 19th century Calcutta—in the outpourings of the gentleman poets of Bengal—Indian poetry in English has had a strangely persistent existence. But pale imitations—actually, exoticised brown variants—of the “flowers of English poesy” that are the staple of school curricula are the most of what one gets to see. But, occasionally, one encounters an authentically poetic sensibility, stubborn and rooted, both in the heat and dust, the multilingual cacophony of the subcontinent, and in a confidently-possessed English: a sensibility that struggles and sometimes, improbably, succeeds in remaining faithful to its multiple, and divided, cultural inheritance. Neither exotic nor merely derivative, such poetry is constructed precisely, and mysteriously, out of the difficulty of the enterprise. Ali was a conscious practitioner of this difficult craft, and wrote: “We can do things with the syntax that will bring the language alive in rich and strange ways....”

In coping with tragedies, Ali’s Urdu-informed English let him fabricate a poetry adequate to subcontinental styles of emotion.

It may appear somewhat odd to include Ali in this category—particularly since he lived out his agony in the US, in cold Massachusetts. And yet, Ali is—was—well-positioned to distil the poetry inherent in his divided existence, writing in his Nostalgist’s Map of America as well as The Half-Inch Himalayas about his beloved Kashmir, shrunk to the dimensions of a picture postcard. Considering how integral the experience of exile is for the metropolitan Indian, there is much here that speaks to that aching sense of loss. Read “I Dream it is Afternoon When I return to Delhi”: “Once again my hands are empty.”

The problematic—problem, even—of Indian poetry in English goes beyond the mainly thematic. Indian realities make demands that refuse to be contained within the rhythms of northern modernism. The modernist aesthetic of restraint and understatement—“less is more”—exerts powerful pressure. But, one is also dealing with extreme realities, with things that cry out for plangency, for extravagant utterance. For Ali, these demands came most notably in the form of the horrors that inform his Kashmir poems—The Country Without a Post Office: “Death flies in, thin bureaucrat, from the plains....” Private grief informs the later work—the harrowing illness, then death of his mother and, finally, his own impending mortality. Multiple linguistic belonging is part of the Indian inheritance, but it is important to think of this not as an arithmetical aggregate of competencies, but rather as something chemical, even organic. Because the languages combine, and produce great possibilities in either parent language. Ali had essayed versions of Ghalib and Faiz—translations of course, but also something subtler. In coping with tragedies personal and political, Ali’s Urdu-informed English allowed him to fabricate, or seek to fabricate, a poetry adequate to subcontinental styles of emotion. It is a tricky exercise. English sounds maudlin where Urdu and, for all I know, Bangla and Tamil, sounds moving. But what saves Ali, so to speak, is his penchant for tight metrical forms: “See the famished sighs I’ll lock into braids....” It doesn’t always work—but it opens the way for a profound exploration of our cultural condition, subject to the parallel and conflicting demands of our multiple belongings.