Par For The Cause? 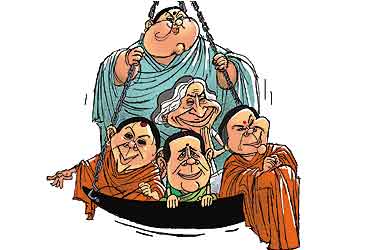 illustration by jayachandran
Anupreeta Das December 22, 2003 00:00 IST Par For The Cause?

With these pithy lines, Indira Gandhi smoothly unsexed her public image and perhaps foreclosed the need to focus on women's issues as a woman politician. Today's women politicians may lack Mrs Gandhi's eloquence, but they too seem to be guided by a similar sensibility once elected to high office. Which is why, when the recent election of three women chief ministers is viewed through a gender prism—as sections of the Western and Indian media have been quick to do—it's hard to locate the exact nature of the triumph for women and the women's movement. Instead, it begets the question: do women in politics make a difference to women in society?

"We can't fool ourselves into thinking that a woman coming to power will automatically make a difference to women in society," says feminist publisher Urvashi Butalia. For her, an election campaign or a policy of governance fashioned exclusively on sops for women may actually backfire. After all, in the electoral game of numbers, women make up only half the electorate.

Harsh Mander, country president of Delhi-based NGO ActionAid expresses similar reservations: "While I welcome the induction of more women into the higher levels of politics, it's not enough for the cause of women's empowerment unless women politicians are able to weave in issues of equality and fight elections on that basis. The fight for gender justice can't be fought in isolation and has to be within a wider, more liberal platform. Two of the new women CMs have come to power on tickets from a party that's communal and patriarchal and it's not reasonable to expect them to spearhead gender justice programmes."

Equally relevant is the fact that none of the women who have been, or currently are, in power display any affinity for the women's movement. Their routes to political power have been varied. While Bihar CM Rabri Devi has faithfully stood in proxy for her husband, newly-inducted Madhya Pradesh CM Uma Bharati is a product of Hindu militancy. Even Delhi CM Sheila Dikshit, respected across party lines as a competent politician, won the election on a platform of good governance. Where's the woman in that, ask many women.

Were they the products of a feminist sensibility, one might have expected a prior ideological commitment to gender-sensitive policy initiatives. On the flip side, card-carrying feminist politicians would have had limited appeal in mass politics. Says Ranjana Kumari of Delhi's Centre for Social Research (CSR): "For a feminist politician, venturing into the political arena right now is like catching the bull by the horns. Instead, we have preferred to address the bigger challenges first, regarding the position of women in the family and in society." However, the feminists have adroitly (and perhaps, desperately) appropriated any political success as a triumph for the cause, given that in the male-dominated public sphere, an inch of space secured by a woman is a milestone.

Unfortunately, women politicians don't seem to have returned the favour. Concedes Kumari: "Women in politics don't see the need to link themselves with the women's movement." But as Vibha Parthasarathi, educationist and former chairperson of the National Commission for Women (NCW), points out women politicians instinctively understand women's issues. "In cases where they don't seem to have made a difference on women's issues," she adds, "such as in Bihar and in UP, it's because of the nature of the politics they're involved in. While Rabri Devi is a puppet and one can't expect her to do anything for any issue, for Mayawati, it's more a case of political survival.Where was the time to focus on development issues?" However, Tamil Nadu CM Jayalalithaa, because she has spent considerable time in and out of power, has demonstrated a commitment to women's empowerment. When she introduced several schemes to protect the girl child in 1992, way before skewed sex ratios became a national concern, it was through dialogues with local women's organisations.

There are those who believe that the sheer symbolism of three women sweeping the assembly elections to reach the top post will make a positive difference to society, irrespective of whether they demonstrate any interest in women's issues. Political analyst Mahesh Rangarajan says the victories of Dikshit, Bharati and Vasundhararaje are important for the fact that "it's the first time that three contiguous swathes of north Indian territory will be ruled by women". He says that it reflects a change in the attitude of political parties towards women candidates. If earlier women were fielded from 'losing' constituencies, they are now considered capable of running governments. "And the higher visibility of women in politics is a source of confidence to women in society," adds political analyst Pran Chopra.

What about the individual symbolism of each of the five women CMs currently in power? Opinions are as varied as the public images of the women in question. Asks Butalia, "What do either Vasundhararaje or Bharati have to say for themselves as women, other than the fact that one's a raj gharane ki bahu (royal daughter-in-law), the other a sanyasin, a celibate?" Her vote would go to Dikshit, who she perceives as a "competent woman". In contrast, Kumari believes each woman CM reflects "different facets of Indian womanhood". She adds that the different personas of these women indicate a break from the elite, Nehruvian mould: "Women leaders like Bharati and Mayawati reflect and redefine the Durga image of strength."

Meanwhile, Congress MP and columnist Mani Shankar Aiyar sees nothing in the public images or politics of women CMs that bears a gender stamp. "Going by the way Jaya or Sushma have run their politics, there is no reason to expect different governance from women," he says. In fact, party ideology and factors such as caste often mar any unity one might have expected from women politicians on the basis of shared gender. Sudha Malaiya, a member of the NCW and former president of the MP BJP women's wing says that the two BJP women won the elections on the basis of their "strong, pro-women image and their commitment to the party line", but refuses to apply the same criteria to Dikshit. However, Bharati once opposed the Women's Reservation Bill on the ground that it did not allow for reservation of SC and OBC women.

The exigencies of retaining power and control in a male-dominated political landscape—Dikshit being a case in point, having had to constantly stave off male competition from politicians like Delhi Congress chief Chaudhary Prem Singh—may prevent women politicians from being overtly supportive of women's issues. "Women who come into political power at higher levels tend to become distanced from everyday issues that affect women," explains Butalia. She notes that this is a trend witnessed the world over, even in countries where women are more empowered and entrenched in public life.

Indeed, perceptible changes to the quality of women's lives are usually the result of initiatives taken by responsible governments and women's groups working outside the corridors of institutionalised political power. In India too, the biggest difference to women's lives—the policy of one-third reservation of seats for women at village and municipal councils, which has brought more than 1.3 million women into local public spheres—came from legislation okayed in principle by the Rajiv Gandhi government.As Rangarajan says, "The real mobilisation of women is happening at the grassroots." At the same time, no one except diehard chauvinists will deny that there is cause for cheer at the country's growing number of women CMs. But will they necessarily aid the uplift of women? No man knows.