Is the Republic Day parade conceptually too frozen in the ’50s? 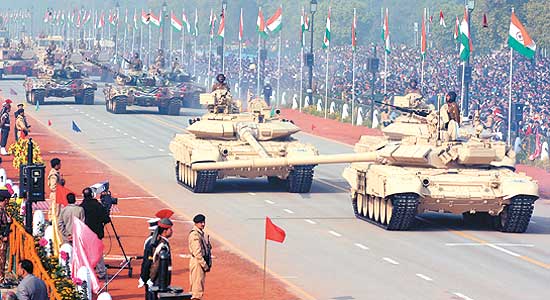 Sixty years ago, India’s first prime minister Jawaharlal Nehru envisioned the Republic Day parade as a “moving pageant” celebrating the country’s unity in diversity. Its elaborate tableaux—with dancing tribes and elaborately costumed dancers representing individual states—projected a sense of cultural nationalism, while the marching ranks of soldiers asserted a new nation’s self-sufficiency and martial might. The parade, as it was then, aimed to incarnate a newly independent India’s self-image, its hopes, strengths, and aspirations. But how many of those imperatives still hold true? How relevant is the parade to the way we are today?

“We must shun a peep-show-like tableaux and parade format and conceive a cultural festival reflecting our aspirations.”
Jyotindra Jain, Member, IGNCA

These are questions that deeply preoccupied Jyotindra Jain, art curator and scholar (he is currently member-secretary, Indira Gandhi National Centre for Arts), and compelled him to write an exhaustively researched essay two years ago. Most of the parade’s form and content remains dictated by the historical context that it sprung from, concluded Jain: “To counter the assertive demand for redrawing the map of India on ethnic or linguistic divides Nehru raised the slogan of ‘unity in diversity’, which became the driving force behind the conceptualisation of the cultural tableaux.”

It is a conceptualisation replete with irony. Not only is a spectacle intended to shrug off our servitude to empire staged along Rajpath, built to demonstrate imperial power, but, as Jain points out, much of the inspiration for the cultural tableaux is drawn from colonial sources, such as Orientalist photographs and colonial museum dioramas, especially when it comes to depicting Indian tribes. It is also problematic that in this “state-sanctioned” show of diversity, officials dictate how tribes and regions should be presented, not the people themselves.

“Nothing changes in content or even the timing of the parade. It’s so monotonous you know what it is without even lifting your head.”
Rajiv Mehrotra, Filmmaker

The visual identity of tribes, in particular, is elaborately choreographed to exclude any sort of progress—they have bright exotic costumes, bare chests, and don’t wear ‘modern trappings’ such as wristwatches. Does this mean that only we—the urban, TV-watching elite—deserve ‘progress’, while the non-urban Other has to embody imperishable ancientness till perpetuity? Not if Jain can help it. “If we must celebrate our culture on the Republic Day,” he says, “we must shun the peep-show-like tableaux and the parade format and conceive a cultural festival which takes into account India’s contemporary cultural expressions and aspirations, and in which evolving processes and factors of  conflict and change can find a place.”

The tribes are not the only ones forced to remain frozen in time. Rajiv Mehrotra, a documentary filmmaker who did the parade’s running commentary for two decades between the ’70s and the ’90s, found himself getting weary of its unchanging, repetitive nature. “As I grew older,” says Mehrotra, “my enthusiasm diminished—not for the sense of the celebration, but the nature of the celebration. Nothing changed in content or even the timing of the parade. It became so monotonous; you knew what was happening without lifting your head. ‘The commanding officer will come, now the Amar Jyoti would be lit....’”

“Much militarism is on display. But I’d also like to see something that recalls our non-violent past. It’s so precious a heritage.”
Mani Shankar Aiyar, Former minister

Senior Congressman and former minister Mani Shankar Aiyar agrees: “An element of innovation would be desirable for those who attend regularly and find it repetitive.” But what he would most like to see, as the tanks, armed formations, and newly purchased missiles proudly roll by, is an original way to display ahimsa alongside the arms. “We’re deliberately, increasingly becoming a military power, but our non-violent ethic is so precious a heritage, it ought not to be relegated to the pre-Independence period.”

The sharper-tongued might dismiss these military displays as Stalinist-style excess, but Lt Gen V.R. Raghavan considers the comparison—and criticism—quite inappropriate. “The military parade at the Kremlin during the Cold War was in some ways a sign of a leadership seeking legitimacy. But our leaders, who can get toppled in the next election, know that legitimacy comes from the street, and not the tanks.” He adds, “Anyway, despite our being in such a troubled neighbourhood, the military dimension of the parade is no more than 25 per cent. So, anyone who says it’s excessively militaristic does not know what they’re talking about. Or, they’re pacifists who don’t know how the global power structure works!”

“The military dimension is no more than 25 per cent. So those who say it is militaristic don’t know what they are talking about.”
V. R. Raghavan, Retired general

In every country, national identity and a sense of tradition is built around such occasions—Poppy Day in Britain (November 11) commemorates those civilians and soldiers who lost their life in World War I, and the 4th of July in the United States is an exuberant celebration of national integration. So few would disagree with the proposition that India needs such celebrations: the question is what, rather than the current parade, is an apt projection of our evolving nationhood? While Jain wants a cultural festival, Aiyar wants the ceremony to travel down to the grassroots. “We ought to create a greater sense of involvement by having Republic Day celebrated in every village panchayat. Quite frankly, right now, it’s meant for the elite,” he says.

Mehrotra, on the other hand, would like to see a more diversified elite take part. “Let’s raise the profile of the event so it includes our best industrialists, gymnasts, and dancers. Let’s make it shorter, crisper, less sarkari.”

One almost heretical question remains: Rather than unchanging cultural tableaux, would an ambulating auto expo with consumer electronics for confetti be a more fitting representation for our exuberantly consumerist India?

Message In A Bottle