The biography of a newspaper—or the genesis of journalistic habits 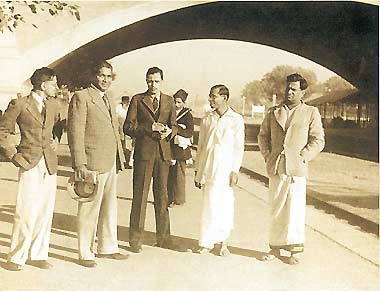 outlookindia.com
-0001-11-30T00:00:00+0553
History In The Making
By The Hindustan Times (Ed.)
The Hindustan Times Ltd. Rs 1,500; Pages 198
ANY newspaper that manages to survive for more than half a century can legitimately lay claim to our interest and even admiration. Survival beyond that point as in the case of The Hindustan Times' 75 years calls for a celebratory volume of which this book is an excellent example. Text, cartoons, photographs and front-page reproductions have been combined to tell the story—and a fascinating one it undoubtedly is—of the origins and development of the HT.

Yet the history of a major paper, at the level of the struggle for survival, is not unlike the history of other leading papers. There are the usual stories of paper deliveries by tonga, the spartan conditions in which the paper was edited and printed, the meagre circulation, the comically low salaries of those pioneering days, the highs and lows of financing, and the idiosyncrasies of larger-than-life editors. But what distinguishes the HT story is the paper's close association with the nationalist freedom movement. It was, as K.K. Birla says in the preface, a politically motivated crusade in which the Birla family and G.D. Birla in particular played a decisive role, not simply as a source of much-needed finance but as an anchor in the largest sense of that word.

This attracted penalties and harassment from the British which in turn fuelled the sense of mission that inspired the entire staff. How much, one wonders, did this rather unique experience help shape journalistic attitudes after independence and set the pattern for relations between editor and proprietor, and between journalists and politicians? For example, an inflexible anti-British and therefore anti-establishment posture developed in the post-independence years into a kind of inbuilt negativism. Denouncing the government became an easy recipe for editorial "independence"; and as an offshoot of the close association of journalists with the Congress party in the early days of the nationalist movement any support of the government began to be seen as a surrender of editorial freedom.

Britain's departure in effect deprived Indian journalism of its favourite demon. Soon the dangers of planted stories and the politician-journalist nexus began to surface. Interestingly, it was at this point that G.D. Birla, hitherto rather reluctant to occupy centrestage in HT's editorial affairs, began to bring his influence to bear on the paper's policy. HT had to readjust from a single-minded pursuit of nationalism to what G.D. Birla defined as the pursuit of "an objective independent policy". His was intervention, not interference. It was courteous, persuasive, informal and considerate; and it never ruled out a basic respect for his editors. So what can we deduce from this about editor-owner relations today?

The norms that regulated journalistic conduct before independence were no longer relevant. Nor were there any reliable guidelines to the future. In this context, journalists with their nationalist credentials and "contacts" with emerging political moguls began to be seen as important moulders of public opinion. The mutual cultivation between journalists and politicians became a factor in national affairs; and from this emerged the strange notion that editors had the exclusive right and responsibility to shape the policy of the paper they edited.

This suited both politician and editor but led to the ridiculous conclusion that a paper's owner had no voice in how the paper was run. An owner who is not interested in defining his paper's role has no business to own it. An owner has a policy in mind. He then selects a like-minded editor and leaves him to get on with it, intervening only when necessary, thereby ensuring the kind of rapport without which no paper can flourish. Yet so powerful was the myth of the individual editor's "independence" that the owners themselves, with some exceptions, created the further myth of their non-interference.

As the Raj began to disintegrate, the British-owned papers, uninterested in the past in Indian nationalist politics, realised it was necessary to open a dedicated pipeline to the nationalist movement. If Durga Das played this role for the Indian-owned HT, Gopalaswamy was his counterpart in The Times of India. News gathering everywhere depends on contacts. But nowhere is the contact technique so widely cultivated as it is in India. Is this part of the legacy which the HT experience has bestowed on post-war Indian journalism? Altogether this is a gripping story, but somewhat marred by careless proof-reading, surprising in a book published by a major newspaper.