Men are leaving the skin-colour closet. It's a cosmetic enlightenment. 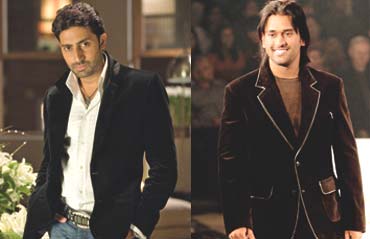 outlookindia.com
-0001-11-30T00:00:00+0553
What passes for the prototype Indian man these days is a manicured and pedicured, buffed and exfoliated fellow who reserves his wooing prowess for the guy in the mirror. Forget the six o'clock stubble, the unruly chest hair, the strong callused hands—the none-the-worse-for-wear look is as out as Tarzan. The Indian man reincarnated takes after Shahrukh Khan who, having first flaunted the washed-in-Lux glow in a bathtub strewn with rose-petals, now pushes Emami's Fair & Handsome, a skin-lightening cream for men, as almost the next best thing after Viagra.

Tall, dark and handsome is so last season—and if you listen to the manufacturers of men's fairness creams, they'll tell you that in India the dusky look was never in vogue to begin with. (Though you might be hard put driving that point home to legions of Indian fans who lust for the likes of AB Jr and Mahendra Singh Dhoni.)

Ashok Venkatramani, who heads Skin Care at Hindustan Unilever Ltd, rubs it in. "The desire for fairness has always been there among Indian men," he says.

The numbers do at least some of the speaking. According to an '06 ACNielsen report, the fairness cream market as a whole is valued at Rs 1,150 crore. Men's grooming products account for Rs 750 crore—although shaving creams still form its largest chunk—and this sector is growing at a rapid 200 per cent, propelled by a sudden demand for fairness creams and hair gels.

So why does the Indian man crave his fairness fix? In part, it is a deep-rooted cultural aspiration. "India was always obsessed with fairness, although it was primarily perceived as a feminine virtue," says Agarwal.

First-movers Emami launched Fair & Handsome in April '05 "to bring men out of the skin-colour closet," says Agarwal. "The response was overwhelming, so much so that it completely took us by surprise and we even wondered how companies such as Hindustan Unilever (manufacturers of the ubiquitous Fair & Lovely brand for women) never thought of catering to men. After all, 50 per cent of our male user-base comes from Fair & Lovely users!"

So the man with a penchant for a pasty complexion was pilfering his wife's—or his mother's—supply of fairness cream till the market thoughtfully provided him with a skin-lightening option that was tailor-made for him. Fairness cream makers are telling us that the launch of skin-lightening options customised for men merely transformed a clandestine craving into confident consumption.

"We Indians are secretly racist," observes sociologist Shiv Visvanathan. "But by projecting fairness as a quality that all ethnic groups want, we evade the charge of being racist. Now companies have gone a step further by dissociating fairness from the female gender. It is the first unisex colour."

More than a year after the launch of Emami's Fair & Handsome, HUL launched Fair & Lovely Menz Active, in August '06. In April '07, Beiersdorf AG, the German owners of Nivea, launched Nivea for Men Whitening Moisturiser and Nivea for Men Multi-White Whitening Facial Foam. Elder HealthCare, a Mumbai-based company run by Anuj Saxena, a television actor, launched Fair One Man Cream this August. And now Emami has gone and upped the ante by roping in srk in what is rumoured to be a million-dollar deal.

Hence, if men want to be beautiful, it makes sound sense for cosmetics companies to cater to their new-found vanity—and stoke it too. According to Emami, male skin is three times more exposed to UV rays compared to female skin; five times more exposed to pollution; doubly exposed to stress factors; and daily subjected to the rigours of shaving. Ergo, there is nothing the beleaguered male skin needs more than a fairness cream.

"That's absurd. I've dated women from all over the world and my being dark was never a problem," asserts investment banker Mudit Agarwal, 40, who lived in the US for a decade. "But of course," he adds, "it's not the western world that is prejudiced against dark skin these days—or at least it's not politically correct to display prejudice." Even Mudit concedes that while it was easy to gain acceptance overseas, he was frequently picked on in school for his skin colour. "The name 'Kallu' in India is reserved only for two categories: your pet dog and your dark brother," laughs Visvanathan. 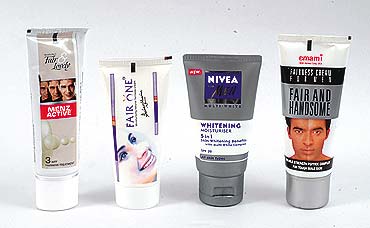 The shelves of men's cosmetics are choc -a-block

Fairness cream companies say their consumer base cuts across all divides. While fairness is "about self-image" among upper-middle class urban men, for their lower-class counterparts, they claim, it is about aspirations, upward mobility and an improved social stature.

And the cash machines sure are ringing all around. Emami's Fair & Handsome already sells out of 5 lakh outlets nationwide. The company expects it to grow from a Rs 50-crore brand at present to a Rs 150-crore brand over the next five years. And in the one year since HUL launched Fair & Lovely Menz Active, it claims to have captured 1.6 per cent of national marketshare.

"By presenting fairness less as a value and more as a technology, it becomes easier to make it available to men and women," says Visvanathan. "After all, technology is supposed to be neutral." But with all their claims about "breakthrough" skin-whitening technology, do these creams work only by reinforcing age-old stereotypes?

"Of course they do," says Mudit. "This srk ad is going to feed upon the insecurities of young people who haven't discovered that skin colour is a non-issue." Skincare companies are too busy counting their moolah to care. Agarwal puts it bluntly: "We are strictly here in a commercial business situation and are not here to set social standards."

Besides, not all of this passion for paleness is a latent cultural aspiration waiting to be exploited. Some of it is the outcome of a 'metrosexual movement' of sorts, a new male order, so to speak, where grooming is booming. Mudit sees nothing wrong in getting himself a regular manicure, pedicure and facial clean-up. "Earlier, we thought it feminine or gay to worry about your skin or your hair, but now, even my dad lets my mom apply a face pack for him," says Chetan Dujodia (name changed), who runs a prosperous family business in Mumbai.

According to a recent Gillette survey, Indian men spend a daily average of 20 minutes primping in front of a mirror; women spend only 18 minutes. And while neighbourhood chemists report that women's fairness creams still retail five or six times more than men's fairness products, they do agree that the market is picking up fast.

Sudarshan Singh, brand manager of Nivea for Men, puts it categorically: "The Neanderthal look is out." If today's machismo is about looking and smelling good, so be it. It can be safely assumed that Indian women won't miss the BO, the bushy armpits and the paratha-paunch of the traditional Indian man. Neither will skincare companies, for whom business prospects have never looked, well, fairer.

The Gains Of Sacrifice