Papa, Buy Me The Eiffel 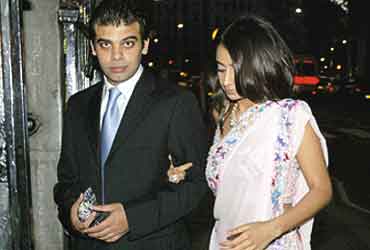 At last a wedding to which we are all invited. The thousand or so guests at the wedding of steel maker Laxmi Mittal's daughter are only interested observers. But aren't we all? Away from those palaces and chateaux, we join all the guests in tripping over those exquisitely unpronounceable French names. Papa Mittal has taught us some new ones. We're checking out all the places he thought of, all the things he thought of doing there, looking at the price-tags of ideas he did not care to look at. There has hardly been a wedding less about groom and bride than about papa and his bills.

Not all of us got that 20-page invite cased in silver, but we almost have the dates down in our diaries. We didn't get the 48-page invitation for the Hinduja family wedding a couple of years back either. These are not invitations to weddings, they are guides to events. When the Indian rich marry, the world has to know of it. The Mittal invite is A4 size and it came with silver, which makes him one-up on the Hindujas, like he is on those rich lists.

Mittal's 'leaked' wedding card charts the wedding's progress. The nuptial Tour de France begins with dinner for family and friends in Paris on June 18. The following day is sangeet, with a play by Javed Akhtar thrown in to run an hour or so—the fee must have done enough to fire the imagination, considering that it is destined for a pretty short run. There will be more of Bollywood on show. After some time it's best to stop figuring. Just think of a fabulous total and add 25 per cent.

The play is at the Gardens of Cuiliers, designed in 1663, says the new Mittal guide to selected locations in France. On June 20 is the engagement banquet at the Palace of Versailles just outside of Paris. The mehndi ceremony back at a Paris hotel the following day and then the wedding at, say it, the Vaux le...