On his powerhouse performance as Abbaji in Vishal Bhardwaj’s much-lauded film, Maqbool. 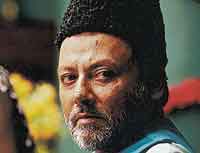 outlookindia.com
-0001-11-30T00:00:00+05:53
What was your immediate reaction to the script of Maqbool?
I realised it was a script anyone would give their eyeteeth for, but I didn't respond immediately.

Why?
Frankly, I couldn't see how I would play the character. Only after four readings, I decided I could do something with it.

Your character appeared larger than life.
It was the requirement of the role. Besides, everything was there, I just had to bring it out.

How much does an actor have to work on defining the character?
A lot. Despite a number of discussions, I had to essentially work on the role myself.

Was physique a problem?
I was aware that people around me were taller. I had to be more menacing than all of them.

How did you achieve that?
I used a kind of walk, a voice and a laidback attitude—a combination that exudes menace.

A fine role after a long time?
It was fulfiling too. I got to work with a good script, very good director and a fine set of actors.

Your shows on Sab TV are popular too. How do you come to terms with the two media?
The approach is different. In TV you churn out so many episodes a month; you can't chew on a role. Besides, you don't have a script before you.

Are filmmakers aware that script is the hero?
I'd say currently they see only the economic aspect—small films with different subjects may get them returns from multiplexes.

So, Shahid is following in you footsteps?
It's gratifying to have a son following you. His acceptance by audiences makes me happy.