After a dream start, the Congress is losing its way. Is all the deadwood responsible? 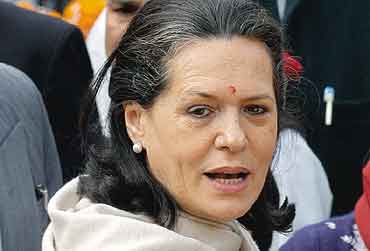 outlookindia.com
-0001-11-30T00:00:00+0553
In May 2004, when the UPA came to power, the scenario was picture-perfect. There was Sonia Gandhi with her "sacrifice", her connection with the "aam aadmi", her social equity agenda. There was Manmohan Singh with his aura of incorruptibility and then the economic dream-team of P. Chidambaram and Montek Singh Ahluwalia.

That wasn't all. There were the young MPs led by Rahul Gandhi, untested but seemingly full of promise. Complementing them were the new party secretaries like R.P.N. Singh, Vivek Bansal (both UP MLAs), Nirmal Khatri, Tom Vadakkan and Sudhakar Reddy. Suddenly, the party was looking younger.

Today, as the UPA regime nears one year in office and the Congress organisational polls in May draw close, partymen feel it's time for a reality check. Why hasn't the party been unable to move forward from May '04? Is it because key ministers and party functionaries are the same tired old faces? Would some of those in government be better used in the organisation, and vice-versa?

These are some of the questions Congressmen are asking these days, even as all eyes look to the leadership. A minister close to the PM and the Congress president sums up the leadership's dilemma in making changes in the government: "Both Dr Singh and Mrs Gandhi feel that one year provides a natural time-frame to assess the performance of the ministers. It's long enough for them to prove themselves." Ideally, the ministers must pass on three counts: efficiency and effectiveness, honesty and personal conduct. "Neither of them wants an efficient operator," says the minister adding, "but the problem is that if any change is contemplated, say among those who hold the top six jobs—home, finance, defence, external affairs, hrd, commerce—there are very few alternatives. Of course, these six could be juggled around. There is a need to empower a second line of leadership, copy the western concept of ministers-in-waiting."

Stressing the importance of an effective ministry, he adds, "The Manmohan government will be judged not just by the success of the economic reforms but also by its ability to rejuvenate the party. The party president can only do so much independent of the government." Sources say better intelligence may have helped the PM avert the Jharkhand fiasco. "The home ministry and intelligence agencies failed thrice—in Punjab, when CM Amarinder Singh stopped the release of river waters to neighbouring states, and during the recent Goa and Jharkhand imbroglios."

If merit was the only criteria, party insiders say, Mani Shankar Aiyar—who, by all accounts, has made a success of petroleum and natural gas—is old enough at 64 to make a more contemporary minister for external affairs. Or Kapil Sibal, who's been a diligent and efficient MoS for science and technology, would make for a less discredited and certainly more effective law minister than H.R. Bharadwaj. Similarly, party general secretary Digvijay Singh—with two terms as CM, equalled by very few in the party—could be given a top ministerial slot.

And if there is a shortage of talent, then UPCC chief Salman Khursheed—an efficient MoS for external affairs in the Narasimha Rao government—could be drafted into the Union ministry. There's anyway a view that he's better suited to government than party affairs. And if Arjun Singh can be used as an election strategist, why not young party functionaries like, say, Union parliamentary affairs minister Ghulam Nabi Azad—who steered the party to victories in the last J&K assembly polls and then in AP last year.

The problem is that the Congress's lack of a majority has forced the leadership to balance merit with checkmating any revolt by disgruntled seniors. "There's little room for manoeuvre," says a party MP, adding, "as things stand, there are at least two PMs-in-waiting in the cabinet, one who is currently cooperating with the PM and the other working to destabilise him".

Changes in the government now may be limited to divesting those who hold additional portfolios to bring in new faces, or dropping a few inefficient junior ministers. A cabinet minister says any sign of transformation will be reflected in the composition of the new AICC and, more crucially, in the Congress Working Committee, the apex decision-making body.

If the role of Arjun Singh and M.L. Fotedar in Bihar and Jharkhand highlighted the dangers of deploying those who live in the past, others like party seniors Digvijay Singh and Ashok Gehlot are seen as being under-utilised, even though both are general secretaries. Another general secretary, Mukul Wasnik, it is felt, could be better used as Maharashtra state chief to consolidate the party's non-Maratha base, especially among the Dalits. Similarly, Sushilkumar Shinde, Maharashtra CM when the party regained power in the state, is seen as being too young to be pensioned off as a governor.

Party-watchers add that despite the failure of Union water resources minister Priyaranjan Das Munshi and ex-Chhattisgarh CM Ajit Jogi in Jharkhand, they are among the handful in the party who combine a sound political understanding with the ability to relate to people in other parties. Their so-called failure in Jharkhand had more to do with the fact that they were instructed "not to use money" to form a government.

Till the Congress is strengthened—through better use of the talent within the party, it will face situations such as the one arising out of the Supreme Court intervention in Jharkhand. The Congress, though divided on the issue, eventually decided against anything that might smack of a confrontation with the judiciary. Points out a cabinet minister: "When Indira Gandhi's decision to end the privy purses and nationalise banks faced a challenge from the court, she dissolved Parliament and asked for a mandate to amend the Constitution. She was not afraid to take on the judiciary. She had the courage but she was also operating from a position of strength." Sonia is not. And that makes all the difference.

The Rot At The Core