'Kuchh maja nahin aa raha hai', as the exhibition of the master's works opens to a low-key response. 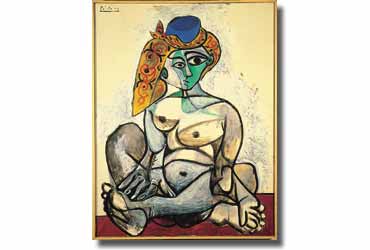 outlookindia.com
-0001-11-30T00:00:00+0553
The energy at the three Picasso halls of the National Museum is palpable but it’s not there because of the crushing numbers. In fact, there are no numbers to crush. The rescheduled hours—the exhibition is now open till 7 pm—haven’t been duly announced. Besides, the show’s opening too was rather inauspicious as it followed the shootout in Parliament. But to their credit, the press preview took place as scheduled on December 13.

The French cultural attaché and co-organiser of Metamorphoses: 1900-72, Laurent de Gaulle, says the initial low turnout has been because of the absence of far-reaching and timely publicity. "Many people have told me the reason they are not going now is because they fear there will be too much of a crowd," he says. But not everyone has access to Laurent! "Kuchh maja nahin aa raha hai," says a Central Industrial Security Force jawan from Bihar, who suddenly finds himself guarding "strange and ugly" paintings that don’t make sense. Except one that has come to be his favourite. It’s called Man with a Mandolin and the jawan enthusiastically conveys to me the joy and wonder of deciphering a man playing music amid a jangled web of cubes. In another hall two artists animatedly discuss some artistic discrepancy in the Minotaur series, which incidentally is the most figurative of the lot. Beyond that there is only the sound of soles squeaking on the buffed-up floor.

The playful genius of the past century would surely have gone into a blue funk had he seen the forbidding security checks, the lackadaisical staffers and incomprehensible blurbs that describe his life and works. All arrangements are made to keep the hoi polloi out, physically and metaphorically.

The exhibition is well-mounted and the halls spacious enough to give viewers the time and distance to study the works, which contain Picasso’s essence, his trademark chaos and his ardent desire to simplify art down to its bare skeleton. These 122 works are about issues and mind-hungry demons that haunted the painter-sculptor throughout his long and prolific life. Here they are exorcised.