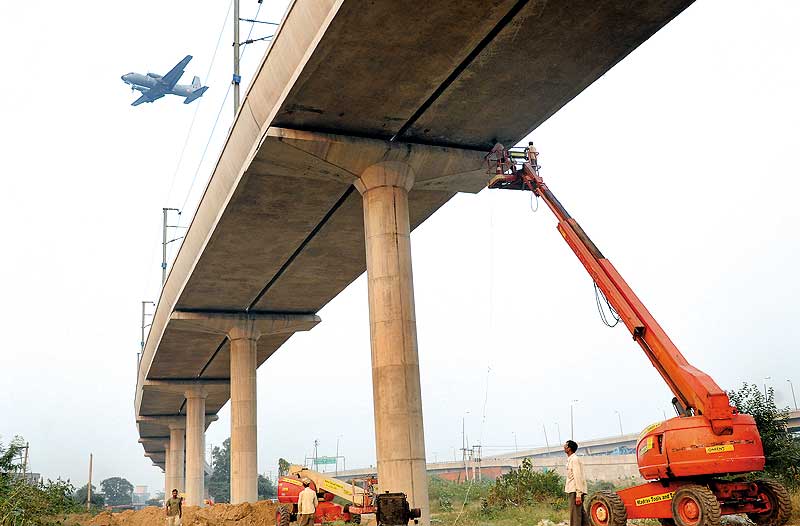 “If you don’t have electricity at home, will you go to Reliance officials or straight to Anil Ambani’s house?” asks Paresh Rawal, the protagonist in Oh My God, a recent movie. Multiplex audiences did crack up hearing this tongue-in-cheek reference to Ambani Jr—but there has been a real-life snafu that has got many raised eyebrows. Earlier this month, Anil’s Reliance Infrastructure, the concessionaire for Delhi Metro’s much-hyped Airport Express line, shot off a letter to the Delhi Metro Rail Corporation (DMRC) offering to quit the prestigious project.

This is no ordinary project. Promising fast check-in and luggage handling for air travellers at Metro stations, it is Delhi Metro’s most prestigious initiative. Problems between the two partners have been festering since it began in February 2011. Operations were halted this July after damage in some of the civil structures was detected. The DMRC says Reliance wanted out as it couldn’t run it profitably. The future looks bleak for this showcase public private partnership.

Despite mediation by the urban development ministry, the two sides have not been able to resolve their problems. DMRC has rejected Reliance’s offer to quit. “The issue of termination of the concession agreement has been disputed and the same has also been referred for resolution though arbitration proceedings,” says DMRC MD Mangu Singh. Reliance’s demand for financial restructuring of the project has also been rejected. As the parties prepare for arbitration, this has the potential to become a huge loss of face for Reliance (whose officials refused to talk on the issue, but a spokesperson said the company, as the concessionaire, would operate the line).

Sources say Reliance Infrastructure has been trying to exit the project as it was incurring significant losses. Revenue from traffic movement was low as the firm had hugely overestimated traffic. People connected with the project say that DMRC’s own survey, conducted by rites, put the daily traffic flow at 40,000 persons, while Reliance’s own survey reportedly quoted a figure of 60,000. The actual traffic was around 20,000.

Other than low traffic on the line, Reliance’s efforts to create retail spaces for an airport-like shopping experience didn’t work.

Not only that, Reliance also made a massive investment in real estate to create retail space and recreate the airport shopping experience at stations. That too did not take off. Former DMRC MD E. Sreedharan says, “Reliance could not sell even five per cent of the area they had developed for retail.” On top of that, it was also forced to foot the huge bill for security provided by the cisf, which mans security at airports. According to estimates, Reliance Infrastructure was running losses of around Rs 350 crore a year on the project and had not paid their dues of close to Rs 50 crore to DMRC.

The Airport Express line connects the city centre with the airport, with facilities for fast check-in and baggage clearance, and was expected to take the load off airports. But there were delays in baggage clearance and check-in, and the trains could not run at high speed due to technical issues. Reliance had pointed to faulty bearings in some structures that affected speed. DMRC claims to have rectified them. Delays in security clearances from the Airports Authority and the civil aviation ministry too defeated the purpose of a high-speed line.

If Reliance manages to exit the project, it could put DMRC in a fix—primarily because it would inherit not only the losses, but also the debt and interest burden of around Rs 3,000 crore. It would also have to find solutions: either run the line itself or find a new partner. Both options would lead to complications and delays.

Many experts see this deadlock as a failure of the PPP model in a major infrastructure project. Sreedharan, who  opposes PPP in Delhi Metro, says: “It was a mistake giving this project on PPP. In a Metro scenario, the PPP model will not work as the fund requirement is big, gestation is long and revenue flow is slow.”

Others feel the government faces a bigger risk—it could be at the receiving end of the losses. Says Shailesh Pathak, president, srei Infrastructure Finance Ltd, “PPPs are good in theory, but the way they have worked in practice in India is very different. The risk is largely with the lenders and the government. In general, the private sector will not do anything that will incur losses, even if this is due to their own aggressive bidding, also called the winner’s curse”.

As of now, repair work on the line is almost done and it may reopen this Diwali. The arbitration could be long and will be closely watched. The outcome will set the tone for future projects of Delhi Metro and, indeed, prompt a re-evaluation of the much-hyped PPP model.