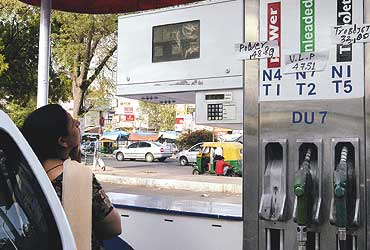 Hemmed in by protests from his own colleagues and party president Sonia Gandhi, finance minister P. Chidambaram has made assurances on keeping inflation in check. Economists feel the RBI will do anything to achieve that goal, if only to send the right message. A senior North Block official admitted the inflation threat is a major dampener for the 8 per cent GDP growth target for this fiscal. As a result, he said, there will be "mitigating measures through various mechanisms to keep it benign".

Before we shadow-box with the danger signals to the economy, it's important to understand the politics and the economics of the decision to hike petrol by Rs 4/litre and diesel by Rs 2. Sonia and the party clamoured for a rollback, petroleum minister Murli Deora rushed to the high command to clarify, there were heated arguments at the cabinet meeting and the supporting Left parties said they will protest publicly. There was even a discussion on whether prices can be rolled back by Re 1 by reducing the fixed component of excise duty. On that, the FM put his foot down and the rollback decision was deferred to another time. Despite the hike, Sonia came out with flying colours—the public perception is that she did try to intervene.