How the BSF motorcycle team made 13 world records, with 17 claimants, in a single year 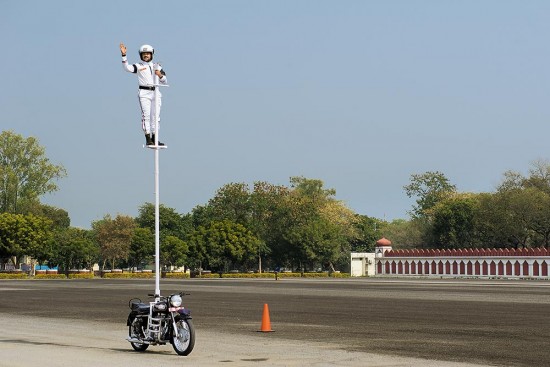 10 hours, 34 minutes, and 27 seconds. That’s the amount of time Inspector Awadhesh Kumar Singh, Team Captain, BSF Motorcycle Team, Janbaz, stood without a break on a 16-feet-5-inch pole while riding his Royal Enfield Bullet in April 2018. It was a new world record. Accompanying him on a ladder of similar height on another bike was a team member, Head Constable Durvesh Kumar, who rode his bike for a similar time and made another record. In 2018, the BSF Janbaz team created 12 world records on their Bullets, which was a record in itself–a 13th one. The story of that year is one of poignant tales, failures, and extreme heroics.

But first, one needs to understand why these records happened in 2018, and not earlier or later. In 2017, the BSF was busy with its new, all-women mot­orcycle display and stunt team, which was to perform at the 2018 Republic Day Parade. After this remarkable performance by the first such all-women team in the world, media and public att­ention focused on it. The men’s team, which was used to such admiration, had nothing to do. “I sensed demoralisation, a feeling that the riders didn’t know what to do,” says Satish Kumar Mishra, Second-in-Command, CSMT, BSF, and Training and Officer Team-in-Charge, Janbaz.