Alive with halftones of Empire, India took a slow hold of the British imagination. Raj nostalgia then played out as a curious re-initiation. 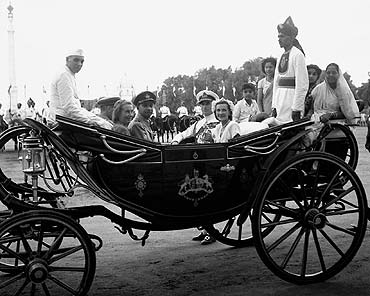 outlookindia.com
-0001-11-30T00:00:00+0553
After the British left India in 1947, it was for thirty years a blind spot in the British imagination. What did India mean to most people in Britain during that time? A place we had left. Of course, that wasn't quite true. Well into the 1960s, there were British tea-planters in Assam and boxwallahs at the managing agencies of Calcutta and Bombay and both cities had clubs where the membership was European.

But in Britain I don't think the word 'India' meant very much. To me, it meant a few family stories. My grandmother, the daughter of a sergeant in the Royal Artillery, had been born in Meerut; my father sailed briefly for the British India Steam Navigation Company (but never saw India). When my grandmother died, in 1955, we inherited some souvenirs and placed them carefully in our new display cabinet: a small stuffed alligator, a gavial or ghariyal, which might have come from the Ganges; black cups and small vases known mysteriously as 'Lucknow pottery'; a book in Urdu script (though I didn't know that then) which my great-grandfather had won for his abilities in Hindustani. I thought it marked my family out as unusual—though we weren't; hundreds of thousands of Britons had passed though India and picked up similar stuff. Beyond that I paid it no attention. At school, I don't think we learned about Robert Clive or Warren Hastings. Britain in the 1950s was in full flight from imperialism, which made the colonial past difficult to talk about, never mind teach. Every cinema newsreel seemed to show Princess Margaret watching the tribal dances of some newly independent African nation. In 1961, I remember my father tut-tutting at the news that India had invaded Goa, with words to the effect 'So much for the pacificism of Gandhi' (a man he admired).

So when I met my first Indians I was in a state of near-perfect ignorance. Most of us were. In the 1960s we went as students to 'Indian restaurants', often called the Taj Mahal, and ate scalding food—food whose only quality was hotness, food that made you sweat and boast about sweating, a travesty of food.

This was in Glasgow. We noticed that migrants from the subcontinent were now working as bus-conductors. Sikh boys began to study at the local school. An Indian student moved into the bed-sitting room across the corridor from mine. We were friendly, but did I ever ask him about India, what it was like, what kind of Indian he was? Never. I say this to my lasting shame. Why not? I can only suppose that India seemed to us a marginal kind of country—too distant to contemplate going to (though at that time ships still left every fortnight from Glasgow for Bombay) and the source of nothing more important than 'curries' that made you want to stick your tongue in a glass of water, and the famous 'Indian accent' as perfected by Peter Sellers. The undeniable truth is that India knew far more about Britain than Britain did of India.

What changed this for some of my generation was the hippy trail and the fuzzy quest for eastern enlightenment. (Much later, in 1983, I met a scholarly Goan who told me of his first sighting of this new kind of Briton: 'She was sitting on a bench in Panjim reading Wordsworth's Prelude and she was dirty. I had never seen a dirty European before.') But it was books and films that changed it for me. James Morris's Pax Britannica, V.S. Naipaul's An Area of Darkness, Ray's Pather Panchali, Merchant-Ivory's Shakespeare Wallah: all of them suggested that India was a very interesting place that offered many different experiences beyond religious mysticism. An ideal place for a curious person, which I am.

Looking back, I think the seeds of the phenomenon known as 'the romance of the Raj' were planted around that time, or at least these books and films prefigured it. When I first came to India, in 1976, it hadn't really got going. The Emergency, which ended early the next year, made India a destination for only the most adventurous tourists and in any case long-haul tourism to any destination was in its infancy. And India itself was perhaps reluctant to be seen and sold as a home of imperial nostalgia; hotels then didn't dress up their rooms with teak (or teak-looking) furniture and antique prints of governor-generals and tiger shoots. British India had died only thirty years before and it was too early to affectionately memorialise it (besides which, in shops, post offices, railway stations and offices, so much of it went on unremarkably existing). 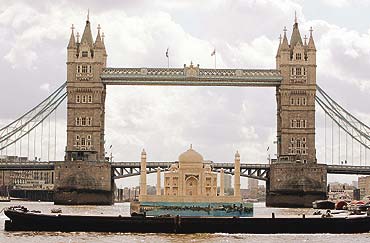 The Empire sails back: Taj on the Thames

The boom came in the next decade. Richard Attenborough made Gandhi and Granada TV serialised Paul Scott's Raj Quartet. In books, there was Charles Allen's Plain Tales from the Raj, transcribed from radio interviews with its still plentiful survivors, and Molly Kaye's Far Pavilions. Throughout the 1980s, it was difficult to switch on British television with seeing a documentary about puffing Indian trains or an interview with some maharaja and maharani in their palace. India, these films and books suggested, still offered you a chance to see how things had been. It was isolated from the currents of modernity. As well as being immensely interesting and sometimes beautiful, it was also quaint.

I wonder if I succumbed to this idea myself. I probably did. Why else would I like Ambassador cars, long journeys hauled by steam locomotives, the old formality of Indian newspapers on their grey newsprint, the invigorating irritation of trying to make a 'lightning' call from Patna to Calcutta? You may say there was some condescension in this attitude—and, again, there probably was—but it came out of a real liking for a country that was simultaneously very foreign and not foreign at all, and also one that was completely of itself, ploughing its own political and economic furrow in the world.

The romance of the Raj has gone now. It died when the Indian economy came out of its aspic and demanded respect—fear even—rather than patronisation from the West. In Britain, you can hardly condescend, however nicely, to a country that owns all your steel industry. All it has left behind are restaurants with mock-Raj names like the Bombay Bicycle Club and a passion for ceiling fans in a fake Victorian style which was invented about 1986. But no intelligent citizen of Britain now can be as ignorant of India as I was forty years ago, and for that the romance of the Raj has in a small way to be thanked.

Three Homilies And A Lesson