Out Here The Nano Is A No-No 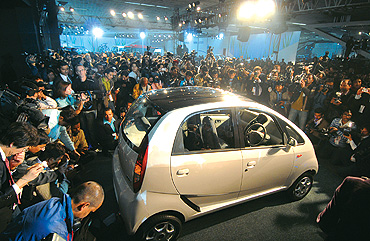 outlookindia.com
-0001-11-30T00:00:00+0553
The big buzz at the auto show in Detroit this month was a car that industry analysts say fails to meet Western safety and emissions standards, and one that many agree will not sell in America. Then, what's all the fuss about? At $2,500, the Tata Nano is a "revolutionary idea", explains Mira Kamdar of Asia Society and the author of Planet India. "It throws down a huge challenge to the automotive industry, especially the world's least innovative one in the US," Kamdar told Outlook.

The car has elicited a mixed response from the American auto industry and environmentalists. For Americans, the Nano brings back memories of the Model T Ford, which sold for as little as $300 in the mid-1920s when Henry Ford perfected mass production of the vehicle. In today's currency, that is $3,450, still more expensive than the Nano's price tag. But American consumers are known for wanting more out of their vehicles. Bill Lohmann wrote in the Richmond Times-Dispatch, "America isn't getting the new $2,500 car that's made in India—and Americans probably wouldn't buy it even if we could.... It has no radio, no air bags, and no future of any kind in the US."

Even those who praise the Nano point out that crumbling Indian roads will crumble further under the burden of additional cars. "The concern is that a super cheap auto will encourage development on the American model—relying on the car rather than mass transit," Newsweek noted. Kamdar agrees: "Look at the damaging effects of the introduction 100 years ago of the Model T...car ownership soared and America built an economy dependent on the automobile and oil, all the ill effects of which, from global warming to wars in the Middle East, continue to plague us all."