Our Pind In Yuba

Yuba City, prune capital of California, is also a veritable 'chhotta Punjab', with the immigrants putting their own vibrant stamp to its culture and economy 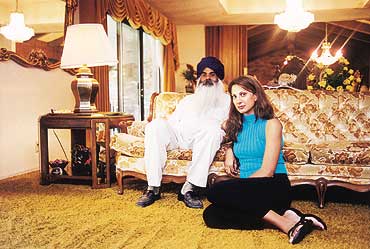 You drive up the narrow road on Route 99, flanked on either side by peach trees, and enter Yuba City in Sutter County, about 125 miles from San Francisco. This, as you have found out, is the heart of the 'Rice Bowl' and the 'Prune Capital' of California. But what you didn't know and which you soon realise after driving around in Yuba City is: that you are also in a veritable 'Chhotta Punjab', where a throaty Sat Sri Akal is the preferred form of greeting; where you can speak Punjabi and not be the odd man out at the local gas station, at the doctor's clinic, even at the farms.

There are more surprises in store. You come across people strolling around nonchalantly in pathan suits. At the farm of Didar Singh Bains, counted among the country's largest peach farmers, you find his hip daughter Daljit, a former model, speak to the workers in fluent Punjabi. At the Freemont Medical Centre, Dr Jasbir Singh Kang's nameplate, believe it or not, is in Punjabi. You drive around, you talk to people—you are told Punjabi is taught in the high schools, that Sikhs constitute 9 per cent of Yuba City's total population of 79,000, that there are three gurudwaras, a temple and a mosque; that the prune capital of California reminds them of their pind (village) in Punjab; that every Friday, for an hour beginning 8 pm, the residents huddle around their TV to watch their favourite programme, Apna Punjab.

The story of the Sikh community in Yuba City begins at the turn of the 20th century, when early immigrants from the Punjab province in erstwhile British India came down here. The first Sikh family to settle in the Yuba/Sutter area reportedly was that of Puna Singh. The handful of immigrants, over the century, have burgeoned into a thriving community of thousands of prosperous farmers, business owners and professionals. Even so, Sutter is still one of the poorer counties in California.

Male immigrants then faced a peculiar problem—the existing laws prohibited them from marrying whites. They consequently entered into nuptial ties with co-workers, mostly Mexican women, as poor as they (the laws also didn't allow non-whites to own land). To them were born the little-heard-of Punjabi-Mexicans.

"There were only four Punjabi women in California before 1947," explains 78-year-old Punjabi-Mexican Mary Singh Rai of Yuba City. Her father Bishan Singh came to northern California in 1909. "My father came to Oakland, Stockton and then to Yuba City before moving to Phoenix, Arizona. He worked for the railways in Yuba City in the early years before becoming a farmer. He first married another woman, and then my mother Ernestina Zuniga in Phoenix. She was his third wife since he had been married in India too. They had a Christian ceremony with all the trimmings," says Rai, who married Lal Singh Rai and moved to Yuba City in 1947.

"We were called Hindoos," recollects 66-year-old Isabel Singh Garcia, another Mexican-Punjabi resident of Yuba City. "We went to the church and the gurudwara. We spoke Spanish and English at home. My father spoke Punjabi, English and Spanish. All the Punjabi men learnt Spanish since the women found it difficult to learn Punjabi. The Mexican women became Indian women. They learnt Punjabi cooking and made rotis and curry, adding a tinge of Mexican flavour to it. They mixed tomato sauce and made Spanish rice to go with the curry."

Isabel Singh's father Memal Singh, typically, had come to Yuba City in 1906 from Jalandhar.A few years down the line, he became a rice farmer leasing property from the white people. Memal's fortunes resembled those of most immigrants of the time, with its highs and lows. He lost his property in 1924, moved to New Mexico where he met Isabel's mother, Genobeba Loya. The Singhs eventually returned to their 'pind' in 1939.

Hindoos to others, the Punjabi-Mexican considered himself/herself half-Indian. "I was also called eight annas to a rupee since I was only half-Indian," says Guru Deva Teja, an attorney and realtor, without any rancour. He was elected the district attorney in 1963, a post he held till 1974. "Isabel and I went to grammar and high school together," reminisces Teja, sitting outside the porch of Singh Garcia's house in Yuba City. Teja's isn't a typical immigrant story: his father Bachan Singh Teja didn't rough it out in the farms; instead, he studied at the University of Arkansas where he met his bride, Delle Fuglaar, who was of Norwegian, Dutch and Irish stock. They moved to Yuba City in the 1930s.

Between the first decade of the 20th century and the end of World War II, the Sikh population didn't grow rapidly. The reason: a 1917 law banned entry of new immigrants into the country. But the porous frontiers to Canada and Mexico did allow an odd Sikh to slip through. "My father Lal Singh Rai came in illegally from Mexico," discloses Leela Rai, 42, president/ceo of the Yuba-Sutter chamber of commerce. "They left India in 1928 but it took them five years to reach California. A group of them walked up from Panama and came to California via Mexico."

The trickle, however, turned into a flood after immigration laws were relaxed post-WW II. Immigrants from Punjab arrived in droves in the Fifties, gradually changing the demography of the area. More important, they were also allowed to bring their Punjabi wives, consequently spawning a culture in which the Punjabi element dominated the hybrid variety of the earlier generation.

The new denizens of Yuba City called themselves Indians or East Indians. "As we grew up, we saw more Indians coming into Yuba City," says Alicia Singh Hitzfeld, 64, and younger sister of Singh Garcia. Adds Leela Rai, who studied at Yuba City High School and California State University, Sacramento, "I remember it was a close-knit community in the 1960s. I was raised in three cultures—the strongest was the Punjabi culture—and we called ourselves Indians. We used to celebrate Republic Day and Independence Day. These were huge celebrations and people would come from all over to Yuba City. We even got movies from Canada."

These new immigrants too weren't well off, and had to work as farmhands in the orchards that dot the area. Even the biggest of the peach farmers, Didar Singh Bains, 63, began as a manual labourer. "I came in 1958 from Nangal in Hoshiarpur. I worked for different people doing manual labour and bought my first farm with my father in 1962. We planted apples the first year," recollects Bains, sitting in his office. Bains Farms now grows prunes, walnuts, almonds, grapes and winegrapes.

Today, Bains and many others own palatial houses and drive flashy German cars. But they endured tremendous hardship to realise their American Dream. "My father, Gurbachan Singh Tatla, shared a room with Bains when they were at the labour camp," says Satnam Singh Tatla, 43, a farmer and orchard owner who came here as an eight-year-old. "The farm labour camp had about 50-60 people and there was one cook and one foreman.Sometimes there were 10 beds to a room. I started at 70 cents an hour," recalls Bains who, like many early immigrants, took off his pagri (turban) and became mauna (clean-shaven), but started wearing the turban again in 1980, perhaps because of the echo the Khalistan movement had here.

In the early years, the community boasted of very few professionals. Hari Singh Everest, 85, a Stanford University alumnus who came to Yuba City to teach in 1961, remembers, "In 1961, most of the people from the community were farmers. Dave Teja's family and Dr Gulzar Singh Johl, an ophthalmologist, were the only two professionals that I knew of at the time. At the elementary school where I taught there were no Punjabi kids, only kids from mixed families. Today, about 10 per cent of the students in Yuba City Unified District are Sikhs."

It was tough in the early years, we could not find a job and we felt awkward. Now, it's different, we have many people who are professionals," recollects Sukhjit Kaur Kang, 39, married to Dr Jasbir S. Kang, 38, a physician. Dr Kang is a relatively new immigrant who finished his medical studies in Patiala before migrating to the US in the late 1970s. He moved from Chicago to Yuba City and says, "I felt right at home when I came to Yuba City and decided to stay here. We are different but we are also part of the American community." Leela Rai comments, "I think there is an effort now to integrate and yet not. It is their intention to integrate but people still wear traditional clothes and appear to maintain strong cultural ties with India. Earlier, everybody wore American clothes."

It was in 1969, on the 500th birth anniversary of Guru Nanak, that Yuba got its first gurudwara. Two more have been subsequently built.

Yuba City has become an ersatz 'pind' which pulls back those who venture out. Perhaps it is the ambience, perhaps people don't feel culturally alienated, perhaps it's the small-town charm. For instance, Leela Rai moved away from Yuba City and worked in southern California, San Francisco and Sacramento before returning in 1988. "I am happy back in my little rural area although I had said once that I'll never come back. My mother knew better. She always said, 'You'll come back'," says Rai.

Similarly, Daljit Bains, 32, daughter of Didar Singh Bains, returned to her family business in Yuba City after getting two degrees (in business and planning and development) at the University of Southern California and working in Los Angeles for a while. "Yuba City is conservative and it has a small village feeling. Everyone knows everybody. People are old-fashioned and people keep their old traditions," she says.

As their numbers grow, the community has tended to diversify. In recent years, many Punjabis have turned entrepreneurs, venturing into the trucking, commercial property and development businesses. "There are 60 small stores in this area and 56 are owned by people of Indian descent," says Dr Kang.

But farming remains the core business. "Farming is in our blood. There is something about Punjabis and farming," says Singh Garcia. "Our fathers paved the way for everybody else," adds Singh Hitzfeld proudly. You can doff your hat to that memory.