Our Man In Louisiana 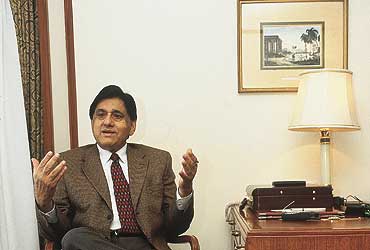 outlookindia.com
-0001-11-30T00:00:00+0553
Bhishma Kumar Agnihotri claims to be a man of extraordinary achievements. Appointed a trial judge in the Punjab high court when he was only 24, he has little doubt that had he stayed on in the land of his birth he "would have been the Chief Justice of India based on seniority alone". Instead, Agnihotri went off to the US, where, in 1985, he became the only person of Indian origin to become the dean of a state law school, the Southern University Law Center in Louisiana, the job he still holds. His impressive bio-data describes him to be "the recipient of more than one hundred awards". These include an official "Agnihotri Day" declared by the state of Louisiana for contributions to the state, the Israel Peace Medal, the 2001 ywca Justice award, and Man of the Year by the Ethnic Media of the US. "I've never failed at anything in my life," preens the garrulous 71-year-old greencard holder with a distinct American twang.

But perhaps Agnihotri's most extraordinary feat has been to get appointed as advisor in the Indian embassy at Washington with the personal rank of ambassador and as ambassador-at-large for nris. A long-time faithful of the rss and the Overseas Friends of the bjp, he was reportedly appointed at the direct behest of the pmo against the wishes of the external affairs ministry and the Indian Government Committee on nris headed by L.M. Singhvi.

Even as Agnihotri flew down to Delhi for consultations with the government and ensconced himself and wife Krishna in the plush Taj Palace hotel, the Opposition staged a walkout in Parliament to protest his appointment. The unprecedented decision runs the risk of creating a parallel power centre in the Indian embassy at Washington and undermining ambassador Lalit Mansingh's position.

It also has the entire foreign service up in arms. Former foreign secretary J.N. Dixit is harsh in his criticism: "What is his competence to advise our ambassador on furthering Indian interests in the US when he may not have any primary knowledge about Indian concerns? This appointment is bound to disrupt the chain of command in our mission. Two ambassadors cannot represent our republic in one country."

Described as a personal friend of Vajpayee, a frequent flier to the US for several years now, Agnihotri says his appointment has been in the pipeline for over a year now. "Several formulations were discussed and finally this job definition was accepted by me. After all, I am leaving a cushy job with 10 secretaries," he declares. Agnihotri, who will draw salary from the Indian state exchequer and enjoy government accommodation, intends to resign his job as dean on his return to the US and join the embassy before Vajpayee's trip to the US later this month.

Sources say he's being rewarded for services rendered during the PM's trip to the US last year. Claiming to be a friend of former US president Bill Clinton ("he was professor of law in Arkansas when I was dean in Louisiana"), he is believed to have been largely responsible for organising Vajpayee's speech to the US Senate last year. rss sources credit Agnihotri for the recitation of Vedic shlokas for the first time in the Senate, before Vajpayee's speech. Says a senior rss functionary: "He is a true patriot, one of the few people who can be described as a friend of Vajpayee."

Agnihotri is candid about his association with the PM: "Yes, I have known him for years even before I went to the US. He was an MP and I was a judge in Delhi.But it was during his visits to the US that I really came to know him well. I've never seen a more patient, more tolerant individual than Vajpayee. To describe me as his friend is to honour me."

But he is defensive about his rss/bjp association. "Yes, I am associated with the Overseas Friends of the bjp because they're the most active group, at least for those nris who want to contribute to their motherland. But such political affiliations are not so important when you live in the US. Indians should not be divided on the basis of region, religion or even political affiliations."

Agnihotri's ideological affiliation is palpable: "I say in speeches to Indian groups, if you are living in the US live like a good Hindu, Christian or Muslim. That is the only way you will have good kids with good value systems." He is also particularly proud of wife Krishna's setting up the Vedic Cultural Society. "One of our daughters said to us, here Christians go to the church on Sundays. We have nowhere to go. So my wife got together Indians to sing bhajans, Ram dhun and chant shlokas," he says.

It is his rss/bjp affiliations that have been harshly criticised. The New York-based Indian National Overseas Congress has dubbed his appointment as an attempt to "saffronise" the nri community in the US. In a letter to President K.R. Narayanan, the organisation described Agnihotri as "a communally biased man" and said that "this appointment is a sublime message to nris to get into the vhp, rss or Sangh parivar if they wish to communicate with the embassy, consulate or the government of India". Career foreign service bureaucrats also fear that Agnihotri's appointment could divide the nri community besides setting a precedent for other political parties to emulate when they come to power in Delhi. Dixit fears that "he may have influence only with those segments who have bjp affiliations".

Though foreign minister Jaswant Singh is believed to have not been too keen on the appointment, the government has little choice but to defend the PM's nominee. Refusing Opposition demands to rescind the appointment, parliamentary affairs minister Pramod Mahajan declared in the Lok Sabha: "Being a member of the rss is not a crime. When Vajpayee and Advani, both members of the rss, can become prime minister and home minister, what's wrong in appointing him. It is a political appointment and not a government job." A pmo official points out that such appointments are recognised in the US system too. Says he: "There have been political appointments in the past as well. Even the British government appointed Swraj Paul roving ambassador for South Asia."

Agnihotri himself argues "surely Vajpayee will choose someone he knows". He points out that there have been several political ambassadorial appointments to the US like S.S. Ray, Karan Singh and Abid Hussain. But foreign service officials counter that such individuals have been people of eminence in India. In contrast, Agnihotri is an unknown entity here.

Highly placed government sources justify the appointment claiming that there is need to meet the requirements of an increasingly influential Indian diaspora. Some nri organisations have praised the appointment. Says Dr Sambhu Banik, head of the Indian American Forum: "I am happy someone will look after us." Adds Parthasarthy Pillai of the Kerala Association: "It is great that someone will look out for the needs of the community in the US."

The government, meanwhile, defends the appointment arguing that it will not interfere with diplomacy. A senior bureaucrat told Outlook: "Agnihotri will limit himself to the nri community. He will not be involved with mainstream diplomacy." But Agnihotri himself is not so rigid about his job definition. Besides servicing the nri community, he also plans to "assist ambassador Mansingh to articulate Indian concerns since I have connections with both the Democrats and the Republicans." And therein lies the rub: Agnihotri's clout could see American legislators court him instead of Mansingh.

But Agnihotri remains unfazed by all the flak he has attracted. He laughs and says: "There is no fun in doing things without facing some opposition. It helps you hone your skills and do a better job." Besides, he describes his new job as "a labour of love" and declares confidently: "If I took US citizenship, I can be anything I want in America. Instead, I have decided to do something for India. And I always succeed in whatever I do."

With T.V. Parasuram in Washington