Other Side Of Midnight

Lower costs plus talent favour India right now. But China, Russia and the Philippines are closing in fast. 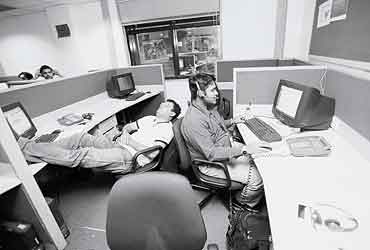 outlookindia.com
-0001-11-30T00:00:00+0553
About six months ago, the CEO of one of the leading call centres in Delhi admitted he had no idea what will happen to his business five years from now. "I am riding a boom, and I will make my money until it lasts. We will think about what can go wrong once this wave peters out." A bit shocking, coming from somebody who had invested millions into his business. Just a few minutes before this self-doubt struck, he was predicting how India would become the global hub for outsourced business. And yet, he had not even a medium-term vision about his operations.

In private conversations, several CEO express the same apprehensions. In public, they keep hyping the great Indian BPO story that's unfolding in front of our eyes. Their concerns are valid but no one has the time to think about them right now. Go grab a chunk of the ever-expanding global pie, and tomorrow is another day. But is it ever that easy? Remember how prices of IT stocks crashed in 2001, thousands lost their jobs, and dozens of software firms had to simply shut shop?

So, after the good news, it is time to uncover the shades of grey: the bitter reality that is also staring us in our faces. One of its facets is that the current BPO boom is based on a single premise: cost arbitrage. Since Indian workers earn much less than their American or European counterparts, it's much cheaper for global firms to shift their operations to India. What it also implies is that most of the work that's coming here is low-end, primarily to pare expenses. And therein lies the danger.

"We need to look closely at labour arbitrage issues," warns Prakash Gurbaxani, CEO, Transworks. Adds Avinash Vashistha, managing partner, neoIT, a Bangalore-based firm that brings clients and vendors together, "The call centre business is transient and could move overnight to other countries where the cost of labour would be lower." The moment a cheaper option appears, the transnationals will migrate.

Indian manpower costs are moving northwards and companies have to spend more on infrastructure. Says services consultant Sunjeev Mahajan, partner in the US-based am&g, "Competition is pushing unit revenues downward and prices as low as $4 per person hour are being quoted. Rates in East Europe can be as low as $2 an hour. This is not sustainable over time." Wipro Spectramind's Raman Roy adds: "I have to run 1,000 vans to move my people across destinations. In other countries, the public transportation system takes care of that. In 10 years, the global environment will get extremely commoditised and we would still be fighting in the trenches to solve basic issues."

Another problem is the huge employee attrition rate, at 37 per cent. To fight for a higher retention rate, companies are willing to go overboard with incentives which range from dream vacations to meals at five-star hotels to handsome cash awards. And that's adding to the costs.

Countries like China, the Philippines and Russia are gearing up to take India head-on. Gartner, the technology consultancy firm, has predicted that, by 2006, China's software revenues will only be marginally less than India's. Today, it is a quarter of ours. There's also something more interesting that is projected for that year. About 40 per cent of the revenues for Indian firms could come from their bases in China. So, in effect, China, as a software base, will be bigger than India. If that can happen in the IT arena, where India is a clear leader, what's stopping the story from being repeated in the fledgling BPO segment?

However, the emergence of China also represents a boon for Indian service providers if they "fully engage this opportunity". But the trend clearly indicates that the Chinese cost structures—for both software and BPO—are really low.That's why Indian firms will be forced to invest there. Admits Vashistha, "China is a fast-emerging competitor in the BPO space. Tomorrow, China or ietnam may have a pair of advantages and then they will be the place to switch work to." Experts contend that supplier markets in the BPO space are increasingly opening up in China, Russia, the Philippines and Malaysia. India, as a country, needs to keep an eye on what's happening out there.

Other advantages that India enjoys today in terms of the vast English-speaking talent pool provide a window of opportunity only for a short while. China has made English compulsory at all levels of education. This means 8-10 years down the line, they will speak it fluently. In the Philippines, with a 94 per cent-plus literacy rate and a majority of its 90 million citizens English-speaking, its professionals are better skilled in the BPO arena. Moreover, Gartner found that Americans find it easier to understand Filipino English speakers than Indians. Therefore, companies like Citigroup are setting up alternative backroom bases in the Philippines.

Critics like Praveen Kankariya, president and CEO of the California-based Impetus Software, feel that "there's nothing happening to prepare ourselves for the BPO boom as a strategy. Our government is pleasantly surprised at the boom and has not reacted. We have to remember that our super success in this field can become our enemy because other countries who aspire to succeed in this arena are emulating us and some of them may do it better". Adds Mahajan: "The government needs to remove quirks in existing policies and create a platform for more effective and sustained marketing of Advantage India."

Global policymakers can also spoil the Indian party. In the past year or so, the decibel level of the opposition against outsourcing, primarily to India, has reached fever pitch. Thanks to growing unemployment among its tech and engineering workforce, several states in the US are planning regulations to ban government operations from being shifted abroad. In the UK, there have been outcries by powerful unions. Nasscom and Indian officials are trying hard to convince these nations that relocating their bases is good for their economies in the long run. "The US needs to create more high-value jobs, rather than try to protect these jobs," says Nasscom president Kiran Karnik.

Still, any policy tinkering can wreak havoc for Indian businesses. This is how things can go wrong. Hyderabad-based call centres, which were focused on telemarketing, took a hit recently when the Bush administration passed a law enabling it to slap a $11,000 fine on telemarketers who call people on a "do not call" list compiled by the Federal Trade Commission (FTC). With some 50 million Americans having placed their numbers with the FTC registry, telemarketers had no choice but to shut shop or reinvent themselves. There weren't too many people to call.

Survivors included Goldstone BPO Services, whose 200-seater telemarketing call centre has been cut back to half. "We were forced to introspect and took this opportunity to refocus on long-term businesses and on areas of real growth that can see a 100 per cent year-on-year growth," says associate vice-president K.S.V. Chalapathi Rao. The company is now focusing on niche areas such as tech support, sales support and other BPO help desk activities. "Even before this legislation, we were looking to move away from telemarketing to client servicing as we had been facing a lot of problems because of non-payment of bills by clients," says N.M.D. Parveez, director, Call World Technologies, another Hyderabad company that burnt its fingers when the US legislation came into place.

What seems to be the problem with Indian BPOs is that in their mad scramble to grab that pot of gold, most of them have not evolved a sustainable business model.And they are offering the same menu to clients. Moreover, the mushrooming of captive units of transnationals is adversely impacting the third party vendors. Arjun Vaznaik, coo of vendor Tracmail, admits that business is becoming more difficult and "we need to rethink our model". If more people like him do that, India will strengthen its case for becoming a tech superpower. And if they don't, it will be the death of yet another dream.

Alam Srinivas And Arindam Mukherjee with Saumya Roy in Mumbai, Savitri Choudhury in Hyderabad and Archana Rai in Bangalore