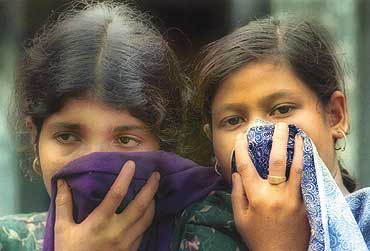 Purnima was brought to Dhaka by a human rights group from Purba Delua, a remote village in northern Serajganj district, 12 days after she was brutally violated in her backyard. She looked terrified, as did her mother, Bashana Rani, who was sitting next to her at the press club. They still do not know what their fault was or why they were attacked. Some two dozen village toughs came to their house on October 8 and began ransacking the household. They then sighted Purnima, took her to the backyard and gang-raped her as her mother screamed vainly for help.

Purnima's story provides just a glimpse of what had been happening for over three weeks countrywide, ever since the centre-right alliance led by Begum Khaleda Zia's Bangladesh Nationalist Party (bnp) won a resounding victory over its arch rival, the Awami League of former prime minister Sheikh Hasina, in the October 1 election.