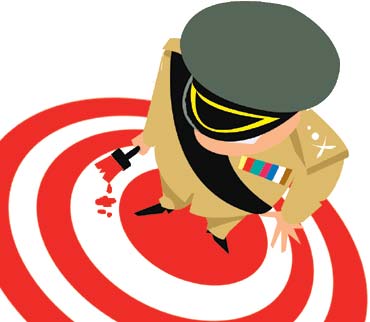 outlookindia.com
-0001-11-30T00:00:00+0553
In his speech on November 3 soon after imposing Emergency, General-President Pervez Musharraf thought it fit and useful to hint at links between judicial activism and the growing extremism in the country. He suggested that the judicial decision to free some terrorists had provoked him to impose Emergency. Does this mean that the military is now in a better position to fight extremists? With a compliant judiciary in place, will this naturally bolster the army's capacity to fight insurgencies?

Seemingly, Musharraf's main gripe with the judiciary was that it had given relief to terrorists, particularly those behind the Red Mosque crisis, and had set free about 61 terrorists. He didn't mention that he had not bothered to sack his federal minister, Ejaz-ul-Haq, who had once confessed to bailing out one of the Red Mosque mullahs charged by the anti-terrorist court.

What the judiciary did was to merely offer an alternative source of justice to the common people who were not heard by the executive. Even Dr A.Q. Khan, the nuclear guru, it was rumoured, had planned to appeal to the Supreme Court. Perhaps, this would have brought out the real story underlying nuclear proliferation.

The fact is that people have no clarity about the government's stand (and role) on several issues. For instance, extremists such as Maulana Fazlullah and his father-in-law Sufi Muhammad in Swat were a creation of the intelligence agencies and the war in Afghanistan. Fazlullah's radio channel continues to spew venom despite the government controlling all frequencies. So, how could the judiciary be blamed for the ineptness of the military-bureaucracy?

And will the soldiers now fight better against the terrorists? A day after the Emergency, the government announced that 213 soldiers who had surrendered to the forces of a Waziristan tribal chief, Baitullah Mehsud, had been released in exchange for 25 terrorists. Military spokesman Maj Gen Waheed Arshad claimed the army had released the terrorists selectively, but can anyone pick and choose once negotiations are begun with extremists? The new media laws will only aid in hiding the latest figures on surrenders/defections.

The problems of low morale are not peculiar to Pakistan. Counter-insurgency operations have their own dynamics, especially when it's being conducted by people with connections to the enemy. India's operations in its state of Punjab, for example, were fraught with similar problems. In Pakistan, the paramilitary Frontier Constabulary is drawn largely from Waziristan or Balochistan, the areas wracked by terrorism. There have even been incidents of soldiers refusing to fight their own people. Although stories of army defections are less known, the fact is the counter-insurgency battle in Waziristan is proving tough for the army, especially when the country at large is not sure whose war is being fought. The war on terror appears more America's war than Pakistan's. And the government itself is to be blamed for this. There are times when the forces have had to own up to operations conducted by the US army from across the border. A popular perception is that Emergency was imposed at the behest of the Americans to fight terrorism. The sacking of independent—and questioning—judges would certainly make life easier if the intent is to please the US.

The predominantly Punjabi military also has over 25 per cent Pashtun personnel. This adds to the problem of conducting counter-insurgency operations in the NWFP. There is also the issue of ideology—senior generals have talked about the influence of Islamic extremism on the officer cadre; but on other occasions they describe the military as the only secular institution in the country. It's true that not all of the military has been 'influenced', but the prolonged interaction with the Taliban is bound to have had an ideological impact on some, especially those in the intelligence agencies.

The ideology factor makes the war in Waziristan far more difficult than the one in Balochistan, where the army is entrenched against Baloch nationalists who, it is claimed, are funded by India. In any case, ethnicity is less of a problem here because there are fewer Baloch in the armed forces. The issue here is the treacherous terrain. The Baloch nationalists claim they face tougher times than the Taliban in the area because the latter have links with the government. Maulana Fazlur Rehman of the Muttahida Majlis-e-Amal has had close links with the Taliban from the 1980s.

There is a tremendous lack of clarity regarding the ground situation and the military's strategic position on militancy. Under the circumstances, the only change that Emergency will bring is to insulate the government's confused policies from public scrutiny and expose the state and society to greater threat. The weakening of Pakistan's judiciary can only bolster extremism, it will certainly not contain it.

(Siddiqa is the author of Military Inc: Inside Pakistan's Military Economy)

Will She, Won't She?