The government implemented Motor Vehicle (MV) Act, 2019, which provides for heavy penalties for traffic rule violations. The new, stiff fines for traffic regulations might scare truant drivers into good behavior. But will they truly work? 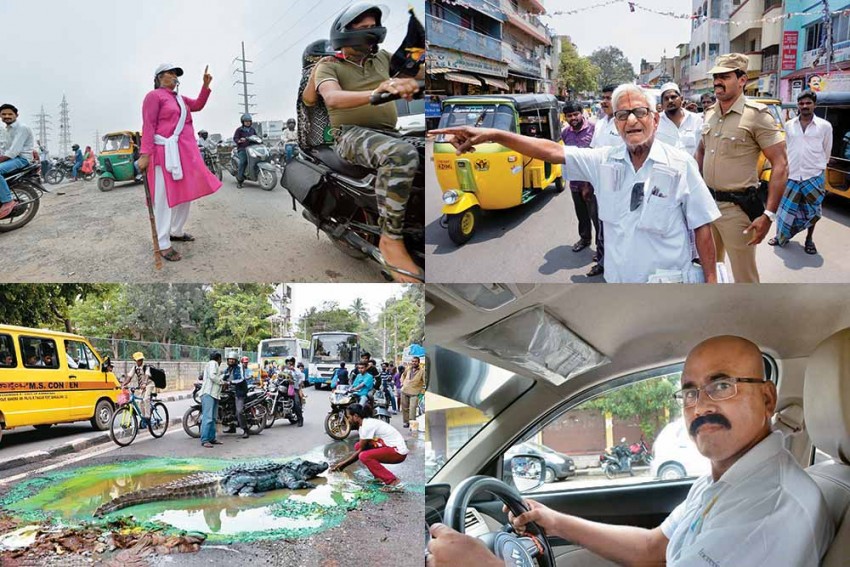 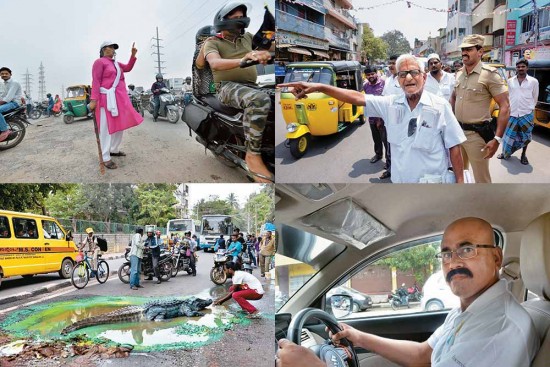 The government implemented Motor Vehicle (MV) Act, 2019, updating a 1988 law. The Act, which provides for heavy penalties for traffic rule violations, came into force from September 1.

The new, stiff fines for traffic regulations might scare truant drivers into good behavior. But will they truly work or is there a need for a graded action plan? Here’s what civic activists had to say.

Dorris Francis, 61, has been managing traffic at a Ghaziabad intersection for over 10 years now. However, she is not a traffic cop­—she voluntarily started working at the spot where her daughter was killed in a road accident. Despite being on the side of those enforcing traffic rules, she finds the increased fines for violations unfair. “Only the poor will suffer from this, not the rich,” she says. “For a poor person, even a fine of Rs 2,000 is huge. A rich man won’t think twice before paying a penalty of Rs 25,000. This government can’t see poverty at all. If they could, they would have realised that a fine of Rs 25,000 can devastate a poor person.” 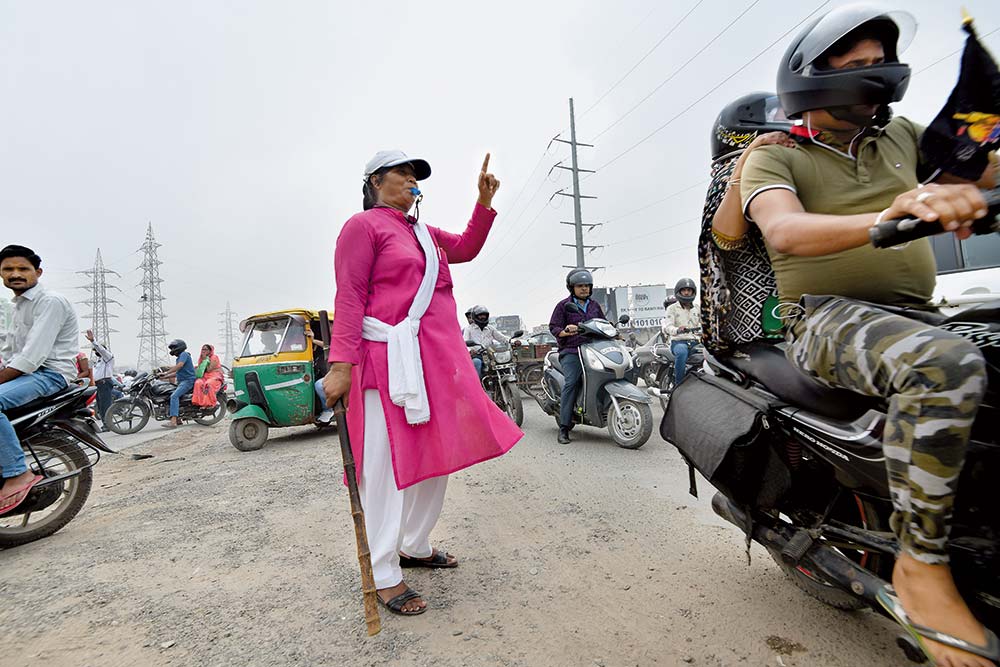 Francis spends four hours every morning on the road, cap on her head, whistle and baton in hand. “The traffic cops can’t even keep a baton. I know how tough a job it is. So many cops have been run over by speeding vehicles. So many have been hit and have rods in their legs,” she says.

She finds the new fines exorbitant as well: “For somebody who is riding a vehicle worth Rs 10,000, what sense does a fine of Rs 25,000 make?” Dorris despises the high-handedness of the police too: “We have seen videos where cops are beating defaulters black and blue. If someone doesn’t have the requisite documents, it doesn’t mean you assault and cripple them.”

When Francis started, she was abused, shoved and hit, but over time, people started respecting and obeying her. She is also a cancer survivor and underwent a surgery in 2016 that was funded mostly by the public, the UP government and traffic police. Doctors advise her to not do the gruelling job, but she insists she’ll continue for as long as she can. 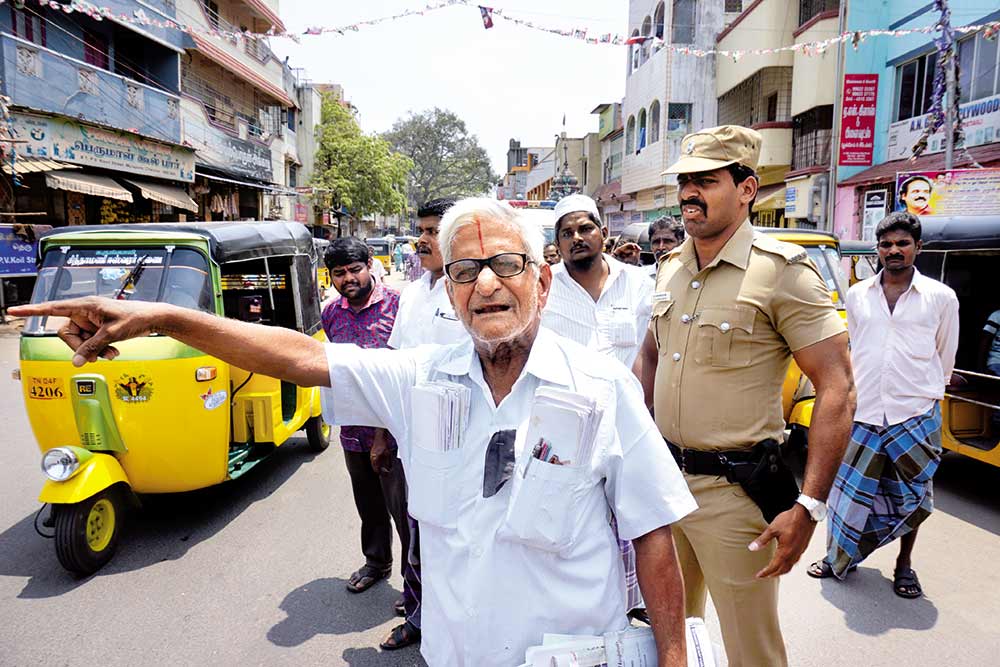 ‘Fines Are Useless Unless Rules Are Enforced’

‘Traffic’ Ramaswamy, 85, is proof that trouble can come in small packages—especially if you have broken laws. This five-foot octogenarian, whose shirt pockets often bulge with petitions, has been pursuing traffic offenders in Tamil Nadu with unrestrained vigour for over two decades. He came into the limelight in 2008, when his PIL led to the Madras High Court banning unlicensed motorised fish carts. Powered by motorcycle engines and devoid of registration or insurance, these posed a threat to road users. Nine years later, when one such vehicle killed a pedestrian, he dragged the authorities to court for contempt of the earlier HC order.

Ramaswamy earned his prefix after voluntarily helping the police regulate traffic in busy areas. After discovering the power of PILs, Ramaswamy has also taken on the powerful shop owners of T. Nagar for building violations and the granite lobby in Madurai for unlicensed quarrying, amongst others. His latest battle has been against the roadside banners erected by political parties. When the authorities did not follow the diktats of the HC, Ramaswamy and two of his associates would themselves get rid of those. “Often, people call me to inform about banners blocking pavements and jutting into roads. I take action when the authorities don’t,” he explains.

“What is the use of threatening people with big fines unless rules are enforced?” says Rama­swamy. “Corrupt officials and rulers with no political will are our biggest bane. No laws will work unless they become disciplined.” 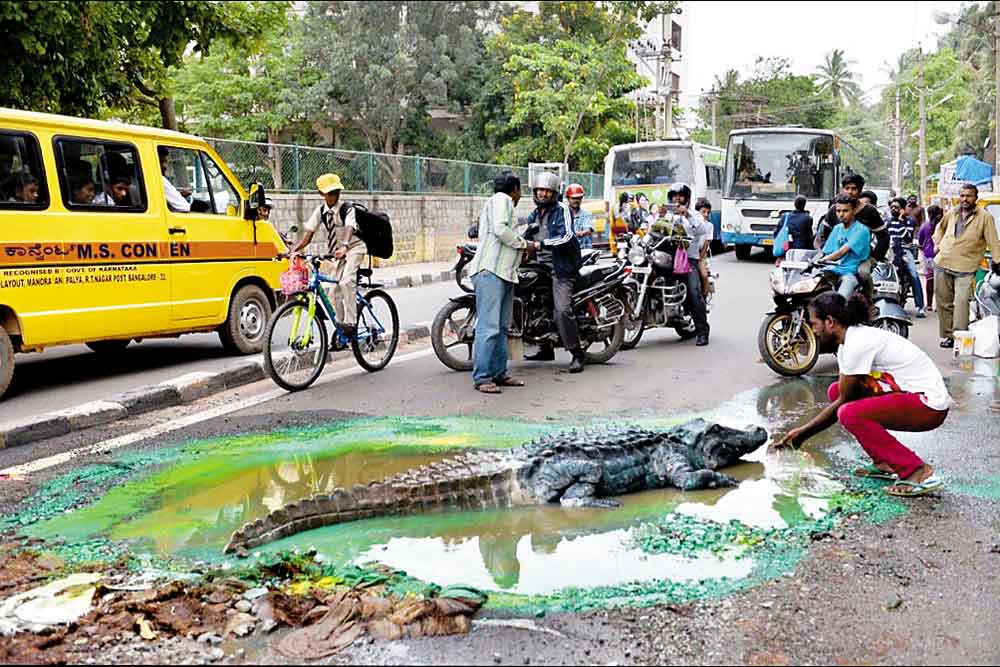 ‘Discipline Has Gone Up, But So Has Fear’

In 2015, Baadal Nanjundaswamy fashioned a 20-kg life-size crocodile and put it in a 12-foot-long pothole in Bangalore. That was the 40-year old artist’s curious way of drawing the attention of municipal officials to civic issues. The photos became a media sensation and the authorities were forced to immediately repair it.

The artist has mixed feelings about the increased fines. “While there is a significant improvement in traffic discipline, the new penalties have induced great fear too. These hefty fines could be a week’s expenditure for a family, or even cost them their daily bread,” he explains.

Nanjundaswamy feels that the government’s actions should better the lives of people and convince them to follow rules, rather than create fear. A convenient and cashless public transport system, and of course, pothole-free roads, could certainly lessen Bangalore’s traffic woes, he asserts.

The crocodile artwork was one of his earliest. “I saw the pothole on the commute everyday. It had been there unattended for several days and affected traffic. The idea behind placing a crocodile there was to get the attention of authorities. And it worked. The pothole was repaired almost imme­diately,” says Nanjundaswamy. 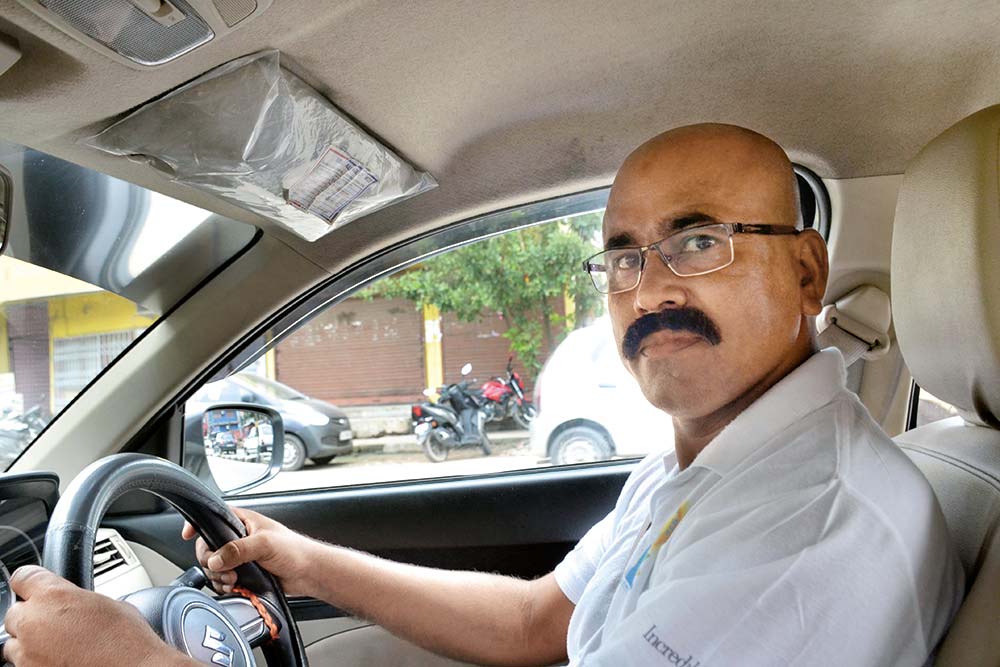 ‘This Will Only Encourage Corruption’

Ismail Ali, 47, has been in the driving profession for the past 24 years. He is unhappy with the new Act as he believes it will boost corruption. “I don’t think imposing hefty fines will solve traffic problems,” he says. Rather, it will encourage the police to collect more money through bribes. If drivers need to pay Rs 10,000 for a violation, they will try to evade it by paying one-third of the amount ­illegally.”

Ali says that if the police implements rules properly, road accidents and traffic problems can be solved. He complains that though the number of vehicles is increasing, the government has failed to maintain infrastructure and create parking spaces. “The speed limit of all vehicles should be controlled. The government seems to be more focused on revenue collection than solving the problem,” he says.

He is also tired of police harassment: “As we get customers from apps, taking calls is a must. The police trouble us for using phones. At least we should be allowed to take calls over Bluetooth.” Ali paid a fine of Rs 500 for using a mobile phone while driving last year. When he went to court to make the payment, he found out that the penalty was registered for not wearing a helmet. “That was ridiculous,” he exclaims. “I hope the police will take their job more seriously.”