Videos, photos, and opinions: the din of a 100 million cyborgs is getting louder 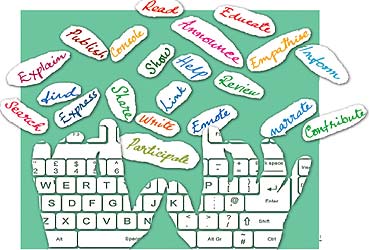 Blogging The act of posting on blogs

Post, Entry Individual articles that make up a blog

Photoblogging A blog predominantly using and focusing on photographs and images

Audioblogging MP3 blog or musicblogs. A variant on blogging using audio instead of text.

Moblogging A blog posted and maintained via mobile phone

Tag cloud Displaying tags lists or keywords in a blog

Welcome to my special blog!! This is the perfect place where I can showcase my talents and can give a momentum to my dreams. I consider this as a platform where I can easily voice out my opinions and can be a voice (speaker) for many unheard voices... ."

Call it garrulity enshrined by technology or a publishing phenomenon to rival the invention of the Gutenberg press and desktop publishing, blogs are multiplying like bunnies. By July 2007, one estimate in the Blog Herald put the number of blogs at 70 million worldwide, while Technorati, the blogpost search engine, claimed to track close to a 100 million. And judging by the Wall Street Journal's recent pronouncement that blogs have now been around for a decade, they cannot be dismissed as just another passing internet fad. Many of us can still live without them, but that could change.

Some cyber wisdom attributes their evolution to the internet home pages that people would create to tell the world about themselves. Blog postings are believed to have descended from the newsgroup culture of the early internet. Others look for more direct parentage: 52-year-old Dave Winer, a former contributing editor of Wired magazine, credited with the development of daily web logging in 1996, or a much younger Justin Hall who started a web-based diary called Justin's Links from the Underground, while in college in 1994. There are other claimants as well.

Whichever provenance you plumb for, they have transformed everybody into a techie. Sify offers "free thought space," as do much bigger entities like Google's Blogger.com. Go to a blogging site, fill in the interface, select a name for yourself and your blog, choose your template and you are set to blog. The world created by this phenomenon is as replete with inventive terminology as the one created by J.K. Rowling. Out of the blogosphere are coming splogs (spam blogs) and blooks (books growing out of blogs). Blogs are ranked by a search engine called Technorati. The number of your ranking worldwide is called your Technorati Authority. When blog posts or items on them are syndicated for the use of other blogs, they are called RSS feeds. Bloggers come lately are newbies. Blogs are littered with terms you will get used to: masterfeeds, pipes, tags, ping, crawl.

As this weird and wonderful universe matures, news has begun to score over personal angst. Technorati ranks blogs by the number of other blogs which link to them. And topping the list last week was Endgadget, a technology blog dedicated to developments in personal gizmos such as laptops, handhelds, cellphones, peripherals and such like. Endgadget had a Technorati Authority of 29,985 which means that many were linking to it. Second to it was Boing Boing with an authority of 25,452—its content defies description but is best described by its tagline, 'A Directory of Wonderful Things'.

Bloggers are usually young, hung up on creating communities of the like-minded, and write for each other. They depend on each other to stay in business. If other blogs do not link to you, you are not going to get very far. India has avid bloggers but their appeal is far from universal. Last week the popular Indian blog Desi Pundit had a Technorati Authority ranking of 494. Indian blogs are evolving but the ones in English are overwhelmingly a people-like-us phenomenon. For the marketing man or actor or copywriter who wants to dabble in writing, and for a whole range of journalists, blogs are the place to express themselves and break the confines of journalistic convention.

They have caught the imagination of mainstream media which cannot stop writing about them. News channels have taken to hyping them up and use them as a quick fix for public opinion. They maintain a list of bloggers they can call for a soundbite. And big mainstream names across the ideological spectrum use blogs to enshrine their writings—Arun Shourie, M.J. Akbar and Siddharth Varadarajan to name a few.

Desi Pundit offers a daily collection of posts, from what it describes as the best that the Indian blogosphere has to offer. The more hyperactive ones write a post a day, the average frequency of an update is much less. A post could simply be a link to what someone else has written or a piece of soulful prose, or a travelogue. People with personal blogs also blog at group blogs like Caferati run by a group of writers who post poems, book reviews. The list of contributors exceeds 70. One of them describes himself as an investor in start-ups, another is an actor who describes his interests as theatre, literature, poetry, long drives, soulful conversations, outdoor adventures, people. Would a reasonably well-informed person, not looking for someone to tell them what to think, get very much out of a non-specialised blog? The answer is no.

Yet blogs have a charm of their own. Somebody is writing about the birth and death of stars, somebody else about the benefits of coconut oil or Kannada movies. Veiled4Allah brings you "the occasional thoughts of a Muslim woman". And an Indian woman in the UK uses her blog to tell you that it is alright to be a bad mother.

Bloggers are an optimistic bunch. Here is one explaining why its fraternity exists: "[We are] powered by pure adrenaline in a motley crew of bloggers scattered across three continents and six time zones that keep the blog humming 24/7.... We love taking on issues that interest us and whipping up a frenzy to generate curiosity and interest in hopes that someone higher up takes notice." With a little help from the likes of CNN-IBN or NDTV, sometimes they do.

The best part of a blog is its name. A popular blog, churumuri.com, is named after a spicy Mysore snack. Then you have Mumbai Help, Doing Delhi, Writers Against Terrorism, Caferati, Dastangoi, Shakespeare and Company, The Poet & His Discontents, Proseonama, Spilled To Bloodlessness, www.indiauncut.com, Retributions and so on. Many contribute to more than one blog and some Indian bloggers, resident and non-resident, blog in more than one language. Ismail, for instance, is Ismail Penukonda, a US-based medical doctor from AP. He has a Telugu blog, Krishnadevarayalu.

Increasingly, those who read blogs are turning away from mainstream media. They find much more to choose from in the 100 million voices out there. The irony, though, is that the technology tailor-made for diversity is increasingly promoting the opposite. As bloggers enshrine opinion with a capital O, they tune in more and more only to read those who think like them.

(Ninan is a Delhi-based media critic.)