One Year Of GST: GST Or GSTN’T?

What hath GST wrought? Weighing up the tax ­reform’s impact one year later, we find a maze of issues to be navigated. 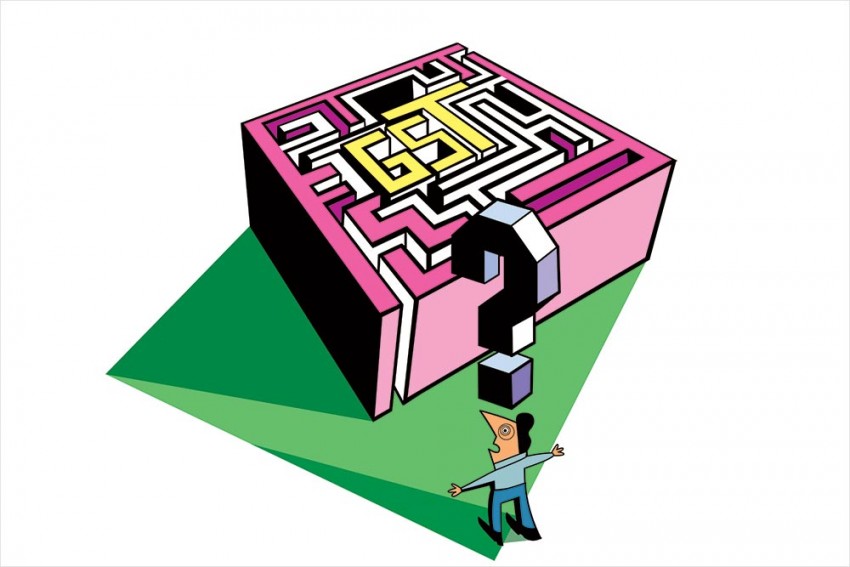 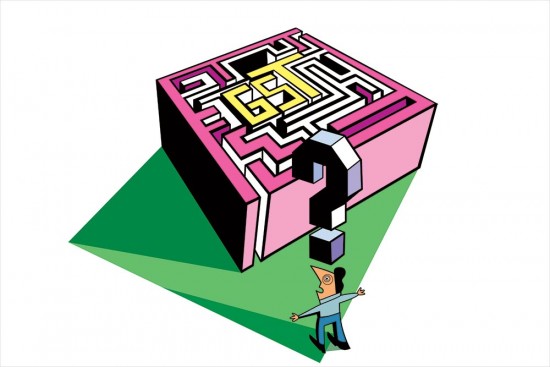 It’s a riot of colours on the ground floor of a textile unit, Kimaya Industries, just outside Surat, a manufacturing hub in Gujarat. Machine-powe­red looms whir incessantly, wea­­­ving multicoloured threads into colourful fabric. On another floor, workers design embroidery to be ­woven into dress materials. Reams of sarees are stacked on one side, ready to be packed and shipped. Business, it would appear to the untrained eye, is booming.

But not quite. For the 85-odd workers, there’s a baleful touch to the pattern forming on the cloth. Over the last one year, about 15 co-workers have lost their jobs. A sense of unease hangs in the air, lingering even a year after the Goods and Services Tax (GST) was sprung on India’s small businesses. Coming on the back of the crippling blow demonetisation dealt in November 2016, everyone’s GST ­baptism perhaps became more thorny and difficult than it may otherwise have been. The months that followed did see some things smoothed out. Hundreds of miles to the north in Uttar Pradesh, Dinesh Singhal, MD of Meerut-based Kanohar Electricals Ltd, says his business has flourished due to GST as it cut delays at interstate check gates, allowing his products to reach their destinations in “40–50 per cent less time”.

Decades in the making, GST was rolled out at a midnight ceremony in Parliament on July 1 last year—touted as the country’s biggest post-Independence tax reform that aimed to abolish multiple levies and unite a country of 1.3 billion people, 29 states and 22 official languages under a “one nation, one tax” rubric. It was exp­ected to transform the way business is done and help the government—both the Centre and states—mop up more revenue by expanding the tax net, and to check the parallel or black economy. So how has it worked out? Has this ambitious tax perestroika, in slow gestation since the UPA years, shown signs of fulfilling its promise? One year later, what is the score?

The beginning, of course, was as messy as a neonatal ward at a rush hour. The chaos that prevailed before and after GST’s introduction was inevitably ref­lected in the political field. The electoral effects went beyond slogans; voting patterns suggested anger. There was also the usual rhetorical slugfest, with the Opposition accusing the BJP-led NDA of rushing through a mammoth and complex policy initiative like it had done with DeMo. For an economy yet to recover from the shock ban on high-value banknotes, GST was the double whammy for many.

A year later, the tremors may have subsided but aftershocks remain, especially for micro and small industries, which bore the brunt of the tax restructuring. Many say the four tax slabs in GST—with the lowest at 5 per cent—are one too many and arbitrary. For others, the transition bro­ught different and novel sets of problems. One of the hardest hit was the textile sector. Rohit Bansal, who runs Kimaya Ind­ustries, says that despite getting over the initial hiccups, the market has not really picked up in the past year. “Trade has gone down because of the cash crunch. Though credit cycles were corrected from 90 days to 150 days, it has become very difficult to keep finances in rotation. The delay in getting refunds on credits for exp­orts is making it very tough to manage.”

Initially, Bansal found himself  equipped to deal with GST requirements because he was software-literate and had trained staff—something that smaller traders, who form most of the 70,000 shops in ­Surat’s textile market, did not have. But other problems surfaced. “We are not able to compete in international or domestic markets because prices of fabric have gone up by 10–12 per cent,” Bansal says. Nearly 30 per cent of small traders reportedly went out of business after DeMo; the remainder are trying to cope with GST.

At an interaction with industry representatives earlier this month, MoS Fin­ance Shiv Pratap Shukla said the GST Council—the highest body that frames rules and regulations for the nationwide tax—is working towards rationalising the rates. Since its inauguration, GST has alr­eady undergone a few changes—in January, the council slashed rates on 54 services and 29 items. Earlier in November, the council shifted 178 items from the 28 per cent slab, while putting non-star category restaurants in the 5 per cent slab. The layperson could never be accused of being a tax savant, but now even the trader was finding it a bit of a maze.

Anil Bhardwaj, secretary general, Federation of Indian Micro and Small & Med­ium Enterprises, says small traders face a new problem in creating e-way bills—the online documentation which has replaced paper bills. “For INS­tance, a lathe machine operator with his limited means and learning is now req­uired to make an e-way bill through the internet. For this, he needs a computer and someone to operate it. In effect, the cost of operation for micro industries has gone up. They don’t understand the new system. It’s difficult for them to employ someone for just this purpose…it eats into their thin profit margins. Sometimes the cost of hiring someone may be more than what the company earns,” says Bhardwaj, adding that the new regime has failed to curb the black market, leading to loss of revenue.

Though there is no official data, DeMo and GST are together believed to have led to job losses across many sectors. In a written reply in the Lok Sabha last August, the government said 610 textile mills “having 3,00,697 numbers of workers on their payroll” were shut down across India. The reply did not specify when this occurred. Ashish Gujarati, who has a weaving unit in Surat, says over one lakh power looms have been scrapped and an estimated 35,000 workers lost their jobs due to the twin effects of DeMo and GST.

The jury is still divided but even those who have benefited from GST say many teething problems remain. Ahm­edabad-based Tejas Desai, a consultant to MSMEs, cites advantages for the service sector and professions like his: the confusion over service tax and sales tax is gone. “I am able to do various jobs because of one GST number and one tax instead of worrying about which category it falls under.” But he found that not everyone had been able to cope. “One of my clients, a manufacturer of small parts for machinery requ­ired in the textile industry, says the market was simply flooded with second-hand machines to sell. Lot of textile unit owners, who could not bear the DeMo-GST double whammy, just sold off their businesses…I believe it was more about the timing and the implementation. Had GST not been enforced just after demonetisation, people would have survived,” Desai adds.

Babu Abraham Kallivayalil of the Institute of Chartered Accountants of India finds the unifying effect deficient. He says while GST is a smooth structure, multiple rates complicate it. “The tax of one pro­duct can be int­erpreted under two different tax laws, for example the chemical component of a cleaning agent comes under a higher tax rate so the product is sold under multiple GST rates by various ven­­dors.”

“It’s hard for micro industries to hire ­someone to handle GST compliance. The cost may be more than the company earns.”

Still, Praveen Kha­n­­delwal, secretary general of the Confederation of All India Traders, feels GST has brought several benefits for industry and the trading community.  “One of the real benefits is that one-to-one interaction with officials has been done away with. The decision to do away with multiple forms has helped. Now we are answerable to one authority. All this has helped, though it will take time for all the glitches to be ironed out.” High among the problems listed by industry is monthly filing of returns with separate filings for each state. Everyone wants a simpler format for filing of returns.

One area where GST has had the most beneficial impact has been in logistics, particularly interstate movement of goods (see ‘NH 101’). State barriers used to be a big nightmare. A uniform tax structure and e-way bills have meant an average of 20 per cent savings in cost and time. Raghunandan Saraf, founder and CEO, Saraf Furniture, an online home decor and furnishing platform, says, “The tax uniformity is the secular face of GST.  However, the ancillary outcome of ease of movement of goods is the most welcome part of it. In the pre-GST era, interstate movements were a nightmare, where no set of documents was enough at a state’s entry check post, more so for some states. Transit forms were unclear, unavailable or unrealistic. Besides, they were ­ever-changing and there was no intimation. With GST and the e-way bill, the movement of goods has eased.”

Sandeep Aggarwal, founder and CEO, droom.in, is happy that GST has simplified taxes and also succeeded in leveraging technology and data to make interstate transactions hassle-free. Official data shows higher tax compliance leading to higher revenue collections. So, going forward, the assumption is that this would be an enabling factor in growth—as long as that maze-like quality of multiple taxes is not simply internalised by one structure.

For the government,  7.7 per cent GDP growth in the fourth quarter of 2017–2018 is the good news it was looking for, heading into next year’s general election For, the political implications of the disruptions caused by GST—and DeMo earlier—will be hard to ignore. Esp­ecially, the job losses rep­orted from the MSME and unorganised sectors. The prime minister had promised to create two crore jobs every year to abs­orb the large number of youths joining the workforce every month. Four years later, many doubt that can be achieved.

As GST’s first anniversary passes, the government is expected to tweak the tax regime through amendments during the monsoon session of Parliament in July. The objective would be to make it simpler and friendlier. Modi had indeed promised a Good and Simple Tax. Congress president Rahul Gandhi fam­ously ridiculed it as Gabbar Singh Tax. GST was supposed to be, well, less taxing. In these days of sluggish growth and attrition, India could surely do with a reprieve.