One Wave Of The Jas Wand 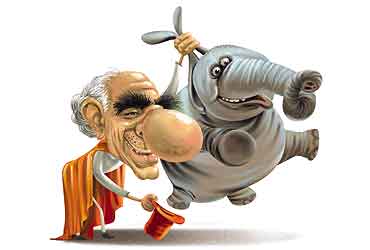 illustration by Jaychandran
Paromita Shastri February 16, 2004 00:00 IST One Wave Of The Jas Wand

outlookindia.com
-0001-11-30T00:00:00+0553
The beaming farmer in the India Shining ad is happy with Jaswant Singh's presentation of the nation's economic health. So is rss mouthpiece Panchajanyau editor Tarun Vijay's agriculturist nephew who has booked an 'Aish-in-Malaysia' package this year. But what about Jaswant himself? Coming from a single-crop family, he exhorted journalists to go to the villages at a post-interim budget meeting. "Wahan toh raunak hai (there's a lot of good cheer there)," he said.

No surprise then that the economy's balance-sheet has scrimped on the splash of red it swims in usually. Fiscal deficit this year has slipped under the five per cent of GDP watermark, for the first time since P. Chidambaram's momentous budget in 1997-98. Even the revenue deficit (a shortfall of current government income against expenditure) is back to '97-98 levels. This, despite no new taxes, cut in customs duties and a series of feelgood schemes announced for senior citizens, central government staff, farmers, small industrial units, rural infrastructure and core sectors since the year began.

And there's no shock nor sleight of hand in these numbers. Except for some accounting jugglery in petroleum subsidy and the state debt swap scheme (the first taken out and the second offset against small savings). The rest are above board—big rise in tax receipts and some expenditure control. And that's not all. Next year's fiscal deficit numbers will slip further down to 4.4 per cent and revenue deficit will dip to a comfortable 2.9.

So, has Jaswant Singh's greatest success been to bring order back to public finances, especially in a poll year? Can we say the fiscal genie has finally been bottled? Many are unsure if the trend is sustainable, but there's a resounding yes to the first question from most specialists. Says CII president and M&M MD Anand Mahindra: "We'd expected growth momentum to cut the fiscal deficit from 5.6 per cent to 5.2 per cent. To see it drop to an extremely creditable 4.8 per cent is a bonanza. India is now well set in its path of growth and fiscal consolidation." Adds Alok Vajpeyi, president, DSP-Merrill Lynch MF: "The vote on account provides a very bullish backdrop for markets. With lower inflation hopes and targeted borrowing, we can expect interest rates to remain soft."

Now listen to Kristin Lindow, V-P and lead analyst for India in New York for Moody's Investor Services: "I was concerned when estimates showed results would be only mildly better than anticipated in spite of significantly stronger than forecast growth, so the downward revision in the 2003-04 deficit is very encouraging." That's straight from the premier global rating agency. But an upgrade is unlikely soon.

Economists are equally impressed. Says Ashima Goyal, professor, Indira Gandhi Institute of Development Research, Mumbai: "The best way to reduce fiscal deficit is through a fall in the real interest rate the government pays and a resultant rise in growth. Since our growth rates were much below potential and real interest rates much higher than global, this strategy is highly feasible. The availability of foreign savings meant the pressure from capital scarcity to raise interest rates could be alleviated." Says Sanjiv Sanyal, senior economist for Asia, Deutsche Bank AG: "Public finances benefit from lower interest rates and economic growth rather than from direct fiscal consolidation. And the gap between nominal GDP growth and nominal interest rates will keep the debt-GDP ratio from spiralling out."

Even Jaswant knows the economy is reaping the growth harvest. As budget secretary D. Swaroop says: "The cut in fiscal deficit has been achieved through growth in GDP, rise in revenues and a cut in expenditure." Even non-tax revenues have gone up by Rs 6,000 crore-odd, mainly due to the Rs 2,800 crore from unified licensing and Rs 2,500 crore from interim dividends from public units.With two months remaining, corporate tax is already 22 per cent higher than the budgeted Rs 51,499 crore. With 40 per cent of advance tax coming in March, revenue secretary Vineeta Rai expects direct tax collections to surpass even the revised numbers and more than make up for the excise slack and cut in customs duty announced last month!

The rest has come from expenditure control in defence and subsidies, primarily the sharp drop in food subsidies owing to lower FCI holding costs after grain stocks were depleted by drought-relief programmes and cheaper credit. The clever FM has added two accounting reliefs to add to the fiscal improvement. The first is shifting petro-products price subsidy to oil companies: Rs 1,543 crore this year and Rs 3,013 crore in the next. The second is adjusting the proceeds of Rs 32,602 crore of state debt swaps with the Centre's liabilities towards the National Small Savings Fund. Since the debt swap has been taken into account only up to September 13, '03, the final receipts budget may look even better in June when the full budget is presented.

And then there's the optimistic privatisation bill of Rs 15,400 crore, compared to Rs 1,217 crore of actual disinvestment so far, more than one-third of which is strictly the expected ONGC share sale. Says Raghvendra Jha, Rajiv Gandhi chair professor at Australian National University: "Privatisation revenues are incorrectly being lumped with regular revenues. This is the proceed from a sale of a government asset and not a recurrent revenue flow."

Thus what saves the day for the nda is more political jugglery than economic accounting. The interim budget 2004-05 is strictly a document of intents, 'promising' to deliver many things, including a revisit to the politically emotive issue of personal IT rates. That's logical, why denude the granary one intends to eat off? Explains think-tanker Kirit Parikh: "The giveaways require interest concessions with little burden on the budget. How to provide cheap loans to target groups is for banks and FIs to decide. Jaswant's goodies have more sound than substance, trying to get maximum political mileage without disturbing the fisc."

But every silver cloud in India has a dark lining. So Jaswant had to reluctantly dress up his budget with the DA merger for central staff despite little assurance it will improve the BJP votebank. But it'll definitely erode the exchequer by Rs 4,000 crore and three times as much after states follow suit. Says Lindow: "When we confirmed the local currency rating at Ba2 and kept the negative outlook two weeks ago at the time of the upgrade of the foreign currency rating, we assumed the government would promise fiscal rectitude in the budget, given concerns about the yawning deficits and burgeoning public debt burden among the educated middle classes, the core of BJP's support. But next year's growth targets are unrealistic and fiscal consolidation is not assured because a large primary surplus (3 per cent of GDP) will be needed to reverse the trajectory of government debt (85 per cent of GDP or more if guarantees are included)."

In the final count, says Jha, fiscal policy has to be counter-cyclical. It's important for North Block to spend in a bad year and focus on growth in a booming year and not squander away the gains. Jaswant has shown remarkable restraint this year given India's past history of election budgets. For a repeat of the 8 per cent magic, he or his successor has no option but to follow the leader in June.