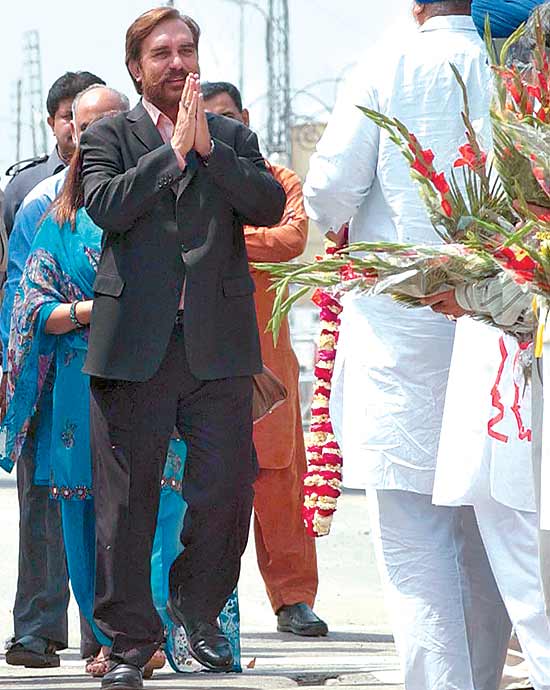 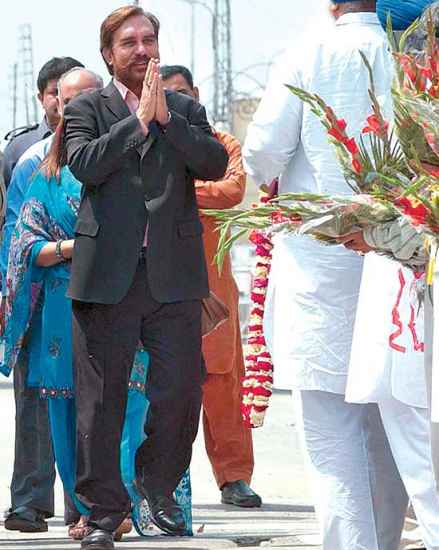 In the shrinking circle of feisty human rights activists, as also among journalists who relish unravelling contradictions in the seemingly exemplary behaviour of public personalities, Ansar Burney, 56, is often perceived to adopt causes having the potential to generate maximum media coverage. He isn’t, they say, an Asma Jahangir, who has fought many a solitary battle against the Pakistani state; nor is he an Abdul Sattar Edhi, famous for tending to the terminally ill and organising burial for those whose kith and kin can’t bear funeral expenses. Not for Burney the loneliness of the crusader, not for him tasks ordinary mortals recoil from.

Burney’s is rather a world of securing freedom for those who have lost hope of it, of petitioning the government or raising finances for their release from captivity, of accompanying them on their liberty walk as TV cameras whir furiously. It was this world of Ansar Burney we watched on June 23, as he greeted at the Karachi port the 22 sailors, including six Indians, whose release from the custody of Somali pirates was secured through a payment of $2.1 million. It was the eponymous Ansar Burney Trust that had raised, and paid, half of the staggering amount. The remaining $1 million came from the Egyptian owner of MV Suez, which had as its crew the 22 sailors—six Indians, four Pakistanis, 11 Egyptians and one Sri Lankan.

It was to Burney that the relatives of six Indians turned for succour, once their pleas of assistance didn’t elicit a response from the Indian political class. Burney didn’t belie the confidence reposed in him, nor did he allow jingoism to sway him into discriminating against the Indian hostages. As he told Outlook, “It never occurred to me to save only the Pakistanis and leave the rest of the hostages to their fate. Humanity is not defined by geographical boundaries.” But what irks him was the behaviour of Indian Rajya Sabha MP K.D. Singh, who backtracked from his promise of contributing $5 lakh. “Perhaps K.D. Singh committed himself to the amount just to gain cheap publicity,” he says.

If Burney’s enviable ability to raise money was on display in the MV Suez episode, his capacity to successfully petition the government was evident in the celebrated Kashmir Singh case. As human rights minister in the 2008 caretaker cabinet of president Pervez Musharraf, Burney had stumbled upon the case of Kashmir, an alleged Indian spy languishing in a Lahore prison for 35 years. Kashmir’s plight prompted Burney to petition Musharraf. Says Burney, “Musharraf was so shocked that he immediately ordered Kashmir’s release and repatriation.” Burney accompanied Kashmir to Wagah, turning the poignant occasion also into a media spectacle that sent his stock soaring. 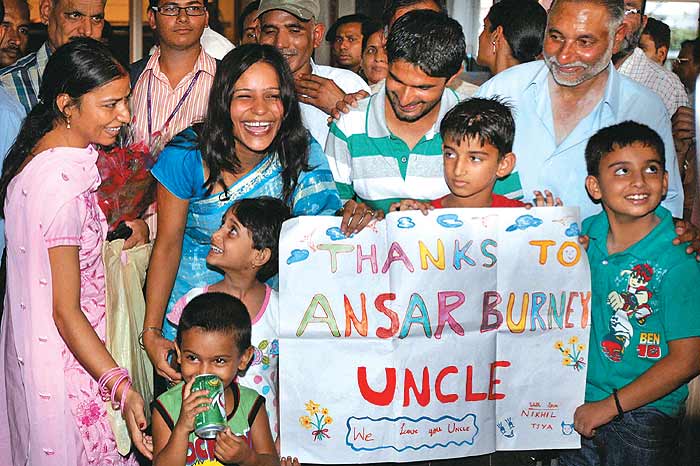 Relatives of the Indian sailors of MV Suez turned to Burney after their pleas for help did not move Indian leaders.

To those carping at Burney’s style of activism, you might want to ask—why fault a person who manages to end human misery through a means of his own choice, though admittedly different from theirs? The litany of complaints against Burney runs long. What kind of human rights activist has no qualms becoming a minister under a military ruler? Why did Burney accept the highest civilian award of Sitar-e-Imtiaz (Star of Excellence) for his human rights work from Musharraf, under whose rule many innocent civilians disappeared or were victims of extra-judicial killings? To them, Burney replies, “It was an award from the state, not from an individual. And I was a minister in a cabinet charged only with overseeing the then impending election.”

Activists scoff at this, saying Burney lacks the courage of conviction. As proof, they point to his about-turn on the case of Sarabjit Singh, who was scheduled to go to the gallows on April 1, 2008, for being involved in serial bomb blasts in Lahore and Multan that killed 14 Pakistanis. Burney took his case too to Musharraf, who promptly postponed the hanging of Sarabjit. But his avowed goal of securing mercy for Sarabjit suddenly ebbed. He now explains, “Sarabjit’s case is different from that of Kashmir. Sarabjit was charged with terrorism, Kashmir only of espionage.”

Observers, however, say Burney’s change of heart was linked to the statements Kashmir issued on his return to India. Not only did he confess to espionage in Pakistan, he said he would do it again if requested by the government. Predictably, the Pakistani media pilloried Burney for securing his release. Stung, Burney thought it prudent to desist from advocating Sarabjit’s cause. His critics further point out that his successful interventions in cases involving Indians—Kashmir, Sarabjit, MV Suez—occurred at the time the India-Pak relationship was on the mend, thereby implying his endeavour had state backing.

Such innuendoes, though, are not entirely fair on Burney, whom the United Nations declared as Anti-Human Trafficking Hero in 2005 in recognition of his efforts to secure the release of South Asian children employed as camel jockeys in Arab countries. Burney’s passion for justice for the shackled and for those languishing in jails has its roots in his own experience of the Pakistani state. In the late 1970s, as an activist of the student wing of the Pakistan People’s Party, Burney was imprisoned thrice by the Zia regime. He recalls, “I met many people who were locked up for years without ever having committed a crime.” Their plight inspired him to float the Burney Trust in 1981; over the years he founded two other outfits—the Prisoners Aid Society and Bureau of Missing and Kidnapped Persons.

Burney says his motto has always been to “serve humanity irrespective of race, religion and creed”. Slipping into a more expansive mood, he elaborates, “It takes commitment and determination...to be human and to act human...to be a kind soul who feels the pain of others and is ready to help them without seeking any worldly gains. My moment of ecstasy is to bring a smile on other people’s faces.” His unflagging endeavour must have lit up many faces with a smile. “Some of them were even born in prisons and mental asylums where they grew up and lived as prisoners or patients for up to three or four decades, before eventually being released and rehabilitated with their families,” he declares in earnest.

To how many has Burney shown the light of freedom and hope? By his own estimate, it would run to 9,00,000, over a span of three decades. Either Burney is guilty of hyperbole or I don’t know the Pakistan I live in. I refrain from expressing disbelief, lest it incites the successful lawyer in him to defend what is an incredible figure, in the process eventually dampening the spirit of Indians who perceive him as a model of what a Pakistani should be.