You couldn't keep Vinoo Mankad down 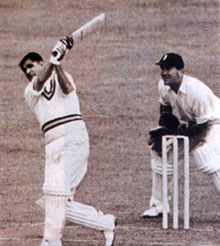 Six-and-a-half years before Kapil Dev was born, a 35-year-old from Jamnagar showed India the three qualities needed to be a great all rounder batting ability, bowling talent and lots and lots of heart. Vinoo Mankad wasn't part of the Indian squad to England in 1952; but he was in the country, playing in the Lancashire league. Fred Trueman terrorised the Indian team in the first Test at Leeds, which England won by seven wickets - at one point in the second innings, India was O for 4. India then made an emergency call to Mankad, easily their best allrounder, and Mankad responded, joining them for the second Test at Lord's.

India won the toss and opted to bat. Mankad, strolling out to open, straightaway took the attack to England. He handled Trueman and Alec Bedser with such ease that leg spinner Roly Jenkins was brought on to bowl after just half an hour, only to be smashed over the sight screen for six. The first-wicket partnership brought up 105; Mankad's partner, Pankaj Roy, made just 35 of those.

Mankad was eventually out for 72, after which India stuttered to 235. It wasn't long before he was back in action. A formidable England batting line-up (Len Hutton, Peter May, Denis Compton, Tom Graveney) ground its way to 537 in 206.4 overs, with centuries from Hutton and Godfrey Evans; Mankad, a left-arm spinner with tremendous control and beguiling flight, bowled 73 of those overs and finished with 5 for 196. (At three-and-a-half minutes per over, that comes to over four hours of total bowling time!)

And then, he walked out to open the batting. He looked tired... of being at the receiving end. He stood tall against Trueman and Bedser, used his feet against Jenkins and Jim Laker, and by the time he was out, with the score on 270, he had made 184, then the highest Test score by an Indian.

England won that Test by seven wickets, as Mankad bowled 24 of the 49overs India completed, for just 35 runs. India lost the series 3-0, and that common Indian refrain took birth there's only so much one man can do.