One Half, Fully Empty?

Chhabria and Mallya were friends, then bitter foes. At the end of hostilities, came the role reversal. 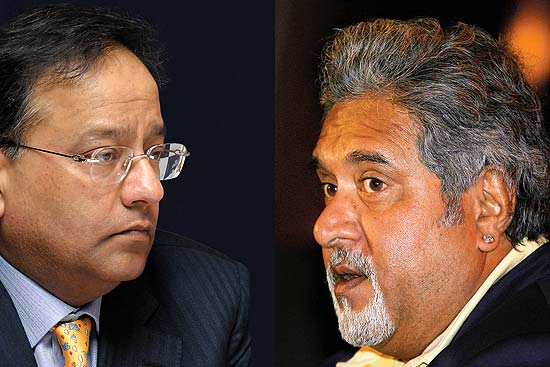 The Changing Fortunes Of Chhabria And Mallya

Vijay Mallya was still top dog in India’s liquor industry three years ago when he buried the hatchet with Kishore Chhabria, who is, well, a longtime friend-turned-foe-turned...never mind, all that’s X.O. as good whisky goes...to settle two decades’ worth of law suits in one stroke. Since then, their paths haven’t crossed. Rather, their fortunes have sailed in different directions. Mallya, bogged down by his huge pile of debt, is a far cry from the liquor baron once known for heady take­over battles. A baronial Chhabria, on the other hand, appears to be creating the swirl in the country’s booze business.

This change in fortunes is a throwback to the old days when Chhabria’s elder brother, the late Manu Chhabria, took over companies one after the other with Kishore’s help—notably Shaw Wallace, the Calcutta distiller known for Royal Challenge whisky, which Mallya finally pocketed after Manu’s death—until the brothers fell out with each other. Much spirit has passed through the stills since, and Chhabria, who owns the Mumbai firm Allied Blenders and Distillers (ABD), is at present the third-largest liquor maker (by marketshare) in India.

A year ago, Chhabria waded into the middle of a legal tussle between Til­ak­nagar Industries and the Dutch company Herman Jansen Beverages over trademark rights for the big-selling brandy label Mansion House. This he did by picking up 50 per cent brand rights from the Dutch firm for the label which Tilaknagar says belongs to it, and so became a party to the dispute. Reports last week claimed that he’s making a pitch to buy a majority stake in Tilaknagar Industries, which has since sent the latter’s stocks hitting their upper trading circuit thrice. Bagging the brandy label will apparently help ABD, known mostly for its whisky brand Officer’s Choice, expand its portfolio and in the process potentially put it ahead of Pernod Ricard India, a subsidiary of the French group.

Chhabria, 60, is known to be media-shy and, as he puts it, uncomfortable speaking about himself. The recent reports about a stake purchase deal in Tilaknagar Industries are speculative, he insists. “We are interested in Tilaknagar but nothing has been done so far in that direction. No movement has happened.” For its part, Tilaknagar too clarified to the Bombay Stock Exchange that it was unable to comment on market speculation.

That the two old warhorses are in the news like they used to be decades ago comes with an ironic twist of lemon. Mallya, 59, was at the top of the game till a few years ago before Kingfisher Airlines began to flounder. For the better part of the past three years, however, he’s been battling lenders, court cases and a hostile takeover attempt of a subsidiary company, Mangalore Chemicals and Fertilisers. At United Spirits Ltd (USL), which he built up into India’s largest liquor company after buying out Shaw Wallace a decade ago, the new management wants him out of the board of directors and the chairman’s post.

Bankers have attached the airline’s headquarters and the threat also hovers over Mallya’s villa in Goa. To boot, an old case from 1995 came back to bite him last week, with the Supreme Court making a scathing observation over his failure to respond to the summons issued by the Enforcement Directorate which was then investigating a FERA allegation. “This is a deja-vu situation with a little bit of a twist. The old fisticuffs do not exist but in the new camaraderie, the fortunes have shifted,” says Harish Bijoor, a Bangalore-based brand expert. “To an extent, Chhabria is seen to be out to consolidate and buy out whereas the other is on a sell-out.”

Chhabria’s two-decade-long battle with Mallya that ended in 2012 centred around the whisky brand Officer’s Choice.

Following the out-of-court settlement of a two-decade-long legal battle with Mallya in 2012, Chhabria’s liquor business has flourished, grabbing a 10.3 per cent share (in 2014, according to market research firm Euromonitor) of the liquor market. This is thanks mostly to Officer’s Choice, the drink that was in the middle of the battles with Mallya. People close to Chhabria claim he could be the market leader in five years’ time. Actually, it’s a tall order. The man himself is somewhat more modest, saying he hasn’t any such ambition. “What about profits? We are far away from making the kind of profits these multinationals are making. We are far, far behind,” he says.

Does Chhabria think it is an irony of sorts that he is now looking for acquisitions while Mallya finds himself on a slippery slope with his gaggle of thorny problems? “Mallya is a legend in the liquor business, so I wouldn’t like to comment on that,” says Chhabria. As for his storied rivalry with the Bangalore tycoon, Chhabria says all that is in the past and that he doesn’t think about it. “We are friends,” he says.

Clearly, Chhabria wants to put the past well behind him and, as one observer put it, may be in a hurry to build his business. “In the 1980s and ’90s, it was an altogether different ball game, a different kind of situation. Now, what he’s done is, over the years he has built up this company and is running it by himself,” says this person. “He’s got one brand that’s doing well, that’s about it. So if he wants to grow, he has to try and merge his company or acquire another company.”

By volume, Officer’s Choice is certainly one of the largest selling brands in the world, but it is a low-priced brand. The big players are now looking for better profits from hig­her-priced drinks. Profitability, not vol­­u­mes, is something Chhabria says he too wants to pursue. He says he wants to take his firm public in a couple of years, but would like to first grow operating profits from about Rs 300 crore this year to Rs 1,000 crore. So, is he satisfied with the way things have turned out? “The moment I say I am satisfied, I become complacent. You always want to have more, isn’t it?” Well, Vijay Mallya should be answering that question.

‘This Vigilance Probe Is Politically Motivated’