One For You, Madondo

The manner in which fortunes were fluctuating, you had this edgy feeling that something was lurking just round the corner. 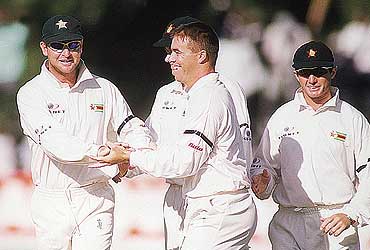 outlookindia.com
-0001-11-30T00:00:00+0553
What a Test! Over the past two months I've watched some great cricket and I have been dreaming of us being involved in a close game of fluctuating fortunes which we finally edged ahead to win. Last Monday evening it came true—after four days of exhilarating cricket, we managed to sneak ahead and beat the Indians. It was one of the best matches I have ever been involved in. But on a personal front, two terrible shots put paid to any contribution I could make in the game! The match ebbed and flowed from session to session, and, finally, it turned out to be four days of classic Test cricket until Andy Flower hit his trademark square drive to finish the game in our favour.

The build-up to this Test had been sad: one of our brightest batting prospects, Trevor Madondo, passed away after a bout of cerebral malaria. His funeral was a very moving affair—he was buried in his full Test kit, with his national cap resting proudly on his chest. I feel Madondo's death gave the team a lesson in how cruel life can be, and also a renewed sense of purpose and vigour—you never know what's in store just round the corner. Sporting black armbands, a very focused Zimbabwe team took to the field, not only to win a Test, but also to play for a good friend.

After a good start, with Watambwa dismissing Badani in the fifth over, all our resolve was called upon very early. Watambwa pulled a hamstring and left the field. At drinks, our physiotherapist gave the terrible news that he wouldn't be available for the rest of the match. Already one bowler down on what looked like a very good batting wicket wasn't the ideal start for us. However, the rest of the bowlers willingly took on the extra workload and did a magnificent job. Having bowled India out for 237 on the first day, we were well in control of the game. But the 11 overs before close of play put paid to that—we crashed to 31 for 3.

We knew we needed to bat well and get some good partnerships going to stay in reckoning. The team managed to do just that with everybody contributing and Grant Flower anchoring the proceedings with a gritty 86. A first innings lead of 78 was just reward for a very gutsy performance. The highlight of the second day was the first over of Harbhajan's spell to Andy Flower, who reverse-swept him twice and deflected him off his legs once for four. Having taken 14 off his first five balls, it looked as though the much-awaited contest between the two had begun. Singh, however, had the last laugh when he induced a bat/pad catch to short leg off his final delivery. Not only was it an anti-climax, it also came at a very inopportune time for us—we were just about starting to get on top.

Day three would be crunch day. One bowler down, we knew it would be a day of keen struggle. And it turned out to be one of the best—and thankless—bowling spells by Zimbabwe in a long time. After two early wickets, Das and Tendulkar looked like building a match-winning partnership until Streak induced a Tendulkar drive to gully. That was the end of his innings, but Dravid combined with Das to carry on until probably the most important part of the game. In Blignaut's one over with the new ball before close, Dravid edged to Andy off his fourth ball. We knew this was the turning point.

Honestly, we weren't prepared for what was to transpire the next day. Thanks to some excellent bowling from the Streak-Blignaut duo, and poor batting by the Indians, we took the last six wickets for just 37 runs. The game had turned on its head. But we still had 157 very nervy runs to get before we could pop the champagne. The manner in which fortunes were fluctuating, you had this edgy feeling that something untoward was lurking just around the corner. However, after a few dodgy moments, it was a relief when Andy Flower hit the winning boundary. I must also mention here Carlisle's tremendous innings under pressure. In my opinion, it was a coming of age innings.

Surely, it was a terrific series with a number of talking points and heart-stopping moments. We've managed to keep India's poor away record intact but they'd be the first to acknowledge that they were beaten by a more focused side. Appropriately at the end, Heath Streak dedicated our victory to Trevor Madondo. May his soul rest in peace.

One more point about Test cricket. I think it's imperative that the boards, in conjunction with the icc, put a stop to meaningless one and two Test match series. Take, for instance the England-Pakistan series, and now this one—both the teams won a Test apiece, and the public, players and sponsors were left crying hoarse for a decider.

The one-dayers and the first triangular series ever to be hosted in Zimbabwe are now almost upon us. Andy Flower's absence from the team for at least five weeks because of a dislocated thumb is a indeed a big blow for us. Once again, I'm sure, our resolve will be put to the ultimate test. But then, it only make you stronger characters. India is a very good one-day unit and after the Test defeat, they'd be keen to go back home with something to celebrate. The West Indies are struggling after a tough series at home against South Africa and they'd be eager to make their mark before the Test series. Let the games begin. There are going to be many more cliffhangers!

When Will The Knives Come Out?