Once Upon A Time In A Desert

He's ensured sufficient water, organic manure and even a social transformation of the village 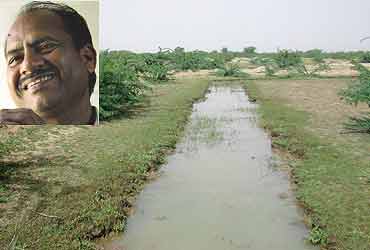 outlookindia.com
-0001-11-30T00:00:00+0553
The wells of Laporia never run dry. In an arid village, in an arid corner of the country’s most arid state, that’s little short of a miracle. Seven consecutive years of poor rainfall in the Dudu subdivision of Jaipur district, Rajasthan, has decimated villages, forcing large-scale migration. But Laporia soldiers on, its perennial wells and ponds never failing to slake their thirst.

Meet the man who made it happen: Laxman Singh, a simple farmer with a simple dream. "I visualised a village at harmony with nature, self-reliant and prosperous," says this farmer-turned-green activist. "I knew the kind of farming we were doing was wrong. We were interfering with nature, subverting natural processes. No good would come of this." Large flats of wasteland bordered the village and water was hard to come by, he recalls. This was in the mid-1980s, when ‘sustainable agriculture’ was not yet part of the policymaker’s vocabulary.

Singh mooted a unique watershed management scheme, dove-tailed with animal husbandry and organic farming. It was low-cost and community-driven. The village elders were convinced. The watershed management project was executed by the village itself. Says he, "We evolved what we now call the chauka system. A series of bunds, channels and pits were dug over a 5-km stretch, in a checker board-like pattern, following the natural slope of the land." Water is thus channelled into the ponds and wells, which are desilted annually in a shram daan programme involving every woman, man and child. Gradually, the wastelands were transformed into rich pastures.

Central to the economy of the village are its cattle. The gochar or pasture is considered sacred and is integral to the watershed management programme. The cattle are left free every morning to graze along the bunds and pits which form part of the chauka system. They follow a well-defined daily routine, eating grass from the pits and sipping water from the channels.

"Our cattle are desi breeds. Stall-feeding is rarely required. The different varieties of grass they consume on their daily rounds seem to have a medicinal as well as nutritional value. They never fall ill," says Laxman. No shrub or tree which grows on the pastureland is ever touched. Likewise, no form of wildlife is disturbed. A portion of village land has been designated as a forest zone where trees, plants and birds of all descriptions are allowed to flourish.

Cattle wealth allows the production of plentiful green manure which is essential for organic farming. "An agricultural scientist once trained us in vermi-composting and we’ve never looked back. It’s five years since any farmer used chemical fertilisers here and yet yields have not suffered," he adds.

The Laporia model can work only if a village pulls together. The toughest part was evicting those who had grabbed the common land, leaving nothing for pastures and watershed schemes. Once the gram sabha land was free, everything followed.

The best part, they say, has been community bonding. Crime is virtually non-existent as the village folk have become accustomed to working together. The bureaucracy, perhaps unnerved by this camaraderie, sent Laxman a showcause notice for having usurped their powers by mooting a penalty (of planting five new saplings) on anyone who felled a tree! The biggest problem in rural areas? Says Laxman: "I think it’s the decline in village common land. If there are no pastures, there will be no cattle and if there are no cattle, there will be no manure. You’ll buy chemicals from the market and poison the earth." The Rajasthan government’s proposal to give wastelands to private players for development should be modified, he feels. If the land is given to village communities, they will do a better job of reclaiming it.

Laxman is replicating the chauka system through an NGO, Gram Vikas Navyuvk Mandal Laporia (GVNML). He can be contacted at 0941071843.

A Hidden Lens With A Zoom