It was an impressive if futile performance. But Sonia will need more to pull her party and the Opposition together. 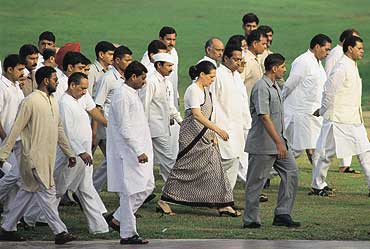 outlookindia.com
-0001-11-30T00:00:00+0553
Cool, combative and confident, Sonia Gandhi took Parliament by surprise when she opened the debate on the no-confidence motion against the government last week. For the first time, she wore the mantle of Opposition leader with conviction, as if it were a couture garment and not a straitjacket confining her to her seat in the Lok Sabha.

But when the applause over her performance had died down and Congressmen sat down to evaluate their gains, they found nothing substantive. They hadn't succeeded either in embarrassing the government, or in showing up cracks in the NDA. Returning empty-handed from Parliament, Congress spin doctors were reduced to contrasting Sonia's better-than-usual performance against Prime Minister Atal Behari Vajpayee's lacklustre late-night speech on August 19. The no-confidence exercise thus seems to have been intended solely to showcase Sonia and pitch her as the alternative leader to Vajpayee.

The question that naturally follows is whether Sonia can deliver the goods. Even the party's most ardent sympathisers aren't entirely sure. Though they agree that the Congress is the only viable alternative to the BJP, they acknowledge that the party faces a "credibility gap" in the voters' perception, which the no-confidence adventure did nothing to bridge. "The politics of exposé is counter-productive. The Congress doesn't need to expose the NDA's self-evident monumental follies. It needs to evolve its own strategy," says Jamia Millia Islamia's Mushirul Hasan.

The histrionics in the House projected Sonia as leader but paradoxically revealed that she could be the party's biggest handicap in its quest for a return to power. At a time when accommodation between parties is an essential feature of the political process, the manner in which the no-confidence motion was moved made it obvious that despite her recent lip-service to the idea of alliances, Sonia's thinking remains centripetal.

The Left Front, particularly Somnath Chatterjee, and other "friendly parties" were upset that the Congress hadn't consulted them before sending the no-confidence notice to the Lok Sabha Speaker. None of them, when belatedly informed, was keen on it. Nothing was to be gained from the motion, they felt. The Opposition boycott of defence minister George Fernandes would be temporarily lifted. On the mat after his ministry refused to part with the CVC report on defence deals to the PAC, he'd get a chance to speak. The PM would simply ignore the issue, falling back on his usual posture of outraged innocence. As it happened, they were proved right, after willy-nilly going along with the Congress. However, the classic Congress display of hubris is staunchly defended by cwc member Pranab Mukherjee who asks, "Why should the main Opposition party need to consult others before tabling a motion?" But there's little doubt it has left a sour aftertaste.

Social scientist Rajni Kothari points out that Sonia's main objective seemed to have been to project herself. "Even when the Congress talks of collaboration with other parties, it is always 'under the leadership of Sonia Gandhi'," he says. The tendency to personalise the Opposition and reduce the Congress to 'Sonia's party' erodes its capacity to challenge the BJP on institutional grounds, he adds.

Even Congressmen agree, although off the record, that Sonia's desperation to challenge Vajpayee as leader is counterproductive. A personality contest between the two immediately brings to the fore all the middle-class prejudices against her, from foreign origin to dynasty. 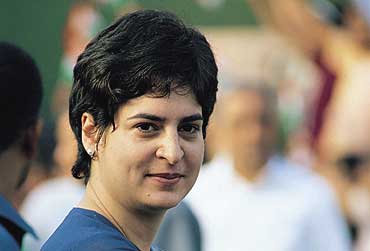 Kothari sees a contradiction between her stated policy, which is collaboration with other parties, and her politics, which is highly personalised. "If the Congress is to challenge the BJP, it has to do so in a collective way.Sonia will have to say that she need not necessarily play the role of supreme leader. That will give the Congress a much better chance of coming back to power," he says. Sonia's inexperience, he maintains, makes it difficult for her to "grasp how to shift between the politics of accommodation and the politics of domination, which Nehru and even Indira Gandhi could do with such facility".

Some see Sonia's constant self-projection and preoccupation with maintaining her grip over the party as a sign of insecurity, arising from the uneasy realisation that political leaders in and outside the Congress are not reconciled to her leadership. "The psychological impact of the Sharad Pawar revolt went deep...it took the combined efforts of Natwar Singh and Rahul Gandhi to convince her to come back," recalls a Congress Rajya Sabha MP. The rootless caucus around Sonia thrives on that insecurity. "It's the Mughal durbar culture, with parasitical courtiers feeding the badshah's ego and paranoia," says Dalit leader Udit Raj. A section of the Congress even seeks to pit mother against daughter, projecting Priyanka not as heir but as the challenger!

JNU professor Imtiaz Ahmed sees Sonia's lack of self-confidence reflected in Congress policy and its day-to-day working. "Factionalism has always infested the Congress but now it has lost the capacity to manage these conflicts, as we have seen recently in Kerala. Sonia is diffident in taking harsh action which might split the party," he maintains.

The most obvious instance of this erosion of confidence is the Congress ambivalence on secularism, says Ahmed. "Overawed by the success of Hindutva as a powerful ideological plank, the Congress began to peddle soft Hindutva, compromising its relentless commitment to secularism in order to accommodate the Hindu vote." By doing so, says retired Bombay High Court judge Hosbet Suresh, "The Congress is letting the BJP set the agenda, instead of focusing on real issues."

Agrees former bureaucrat and social activist Harsh Mander: "The Congress is confused on secularism. A section of the party has ideological sympathies with the BJP and even that which doesn't now believes it's strategic to play down secular principles." Falling between the two stools of Muslim appeasement and soft Hindutva, the Congress needs to achieve ideological clarity, he adds. "It must be as willing to annoy the mullahs as the vhp and also to jettison its own communal baggage. In a sense, it was (the anti-Sikh riots of) 1984 that paved the way for Gujarat."

A growing number of Congressmen, however, seem to subscribe to the views of political psychologist Ashis Nandy, who doesn't see secularism as a viable ideology. Says Nandy: "If you lose touch with the language of faith, you give space to these fly-by-night vendors of religion." His line has found many takers, including several of Sonia's CMs.

Sonia's personal commitment to a secular identity for the Congress is beyond doubt, but she can't seem to carry conviction with her party or to translate her belief into action. "Post-riot Gujarat, when the state government was refusing to provide relief, presented an ideal opportunity for the Congress to fill the breach. Its leaders, however, argued against providing material aid. 'We're a political party, not a social organisation,' went the argument," recalls Mander. 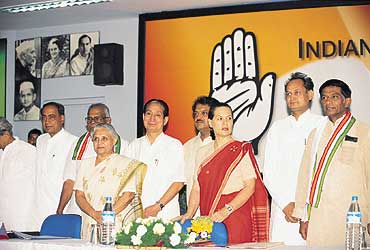 With the chief ministers of Congress-ruled states

The minority's apprehensions about the Congress are yet to be laid to rest, says Ahmed. "The minority vote may come back, but it will be by default rather than design. After a 13-year vanvas, when the Muslims went hither and thither, they have come full circle. Everyone they voted for, except the RJD and SP, has become an NDA ally."

Congress sympathisers are equally disappointed with the party's sporadic efforts at a pro-poor rhetoric, although they acknowledge that Sonia herself is genuinely concerned on issues of poverty, which have all but disappeared from public discourse. "Sonia understands that she must focus attention on the deprived. She identifies herself separately with the poor, as distinct from her party," says Kothari. And Mander, who has interacted with her as part of the informal think-tank she set up under the aegis of the Rajiv Gandhi Foundation, found her sincerely empathetic on hunger, unemployment and Dalit discrimination.

She is also a strong votary of the right to work. Yet, activists in Rajasthan can't get the Congress government to agree to an unemployment guarantee scheme! Mander believes it's time for some daring on Sonia's part. "What's ethically correct is also politically sound. Until the Congress realises that and recasts itself as an unapologetically secular, pro-poor party, there will be no breakthrough," he says.

But no matter what she does, Sonia will still have to deal with the leadership issue. Says Hasan, "There's no threat to Sonia's leadership either from the Centre or the states. But her foreign origin, constantly exploited by detractors, is a major problem." Agrees Sashi Kumar, head of Chennai's Media Development Foundation: "There's a tina factor in the Congress vis-a-vis Sonia. The party has to rethink this, because even the most virulently anti-BJP voter has a hang-up about Sonia's suitability for the top post. Bringing in Priyanka makes strategic sense."

For Ahmed, the leadership issue has another dimension: "What I call the 'bypass' generation in the Congress has created a bottleneck which doesn't allow talented young leaders to come up. The Congress has thus lost the capacity to induct new social forces, expanding its base and changing its leadership profile." As a direct consequence, the party machinery is ossified, communication channels have withered, the high command lacks intellectual support and the coterie rules. "The party has to address the disjunction between grassroots and central leaders," says Hasan.

Nandy points out that there's no incentive for ambitious young faces to stay with the Congress. "The top post in the party is reserved for one family. So how do you accommodate the aspirations of young leaders?" While Congress CMs have emerged as credible leaders in their own right by dint of sterling performances in their states, they still take second place to entrenched durbaris in Delhi.

Despite all its problems, though, the Congress is still better off than it was in 1999, when it put in its worst-ever performance in the Lok Sabha election. It is in power in 14 states and more unified than at any time in its recent history. "The party is now on a much better footing. Having reached the nadir of its support base, the only way it can go is up," Nandy believes.

The pro-Congress shift in the political terrain has more to do with the anti-incumbency factor against the BJP than anything Sonia herself may have done. "The fascination of the middle class with the cultural dimension of Hindutva has weakened. Ayodhya is no more an issue in the political calculus of any party. National security, while a potent issue, doesn't seem to figure at present. Taking centrestage is rising unemployment, increasing poverty and the general impression that in a world full of economic complexities, the Congress is in a better position to provide governance," points out Ahmed.

Anyhow, he says, the shift in the Congress votebase (around 7.5 per cent) was not that substantive. It can be attributed more to the fragmentation of vote in multipolarity contests rather than anti-Congress sentiment.Better management of electoral strategy this time could check the erosion in voteshare, he believes.

Former Naval Chief of Staff Vishnu Bhagwat believes the party is at a crossroads and that the way forward is actually to hark back, to its Gandhian roots: "It has to locate itself with the people and popular movements in order to become relevant today."

So what does it take for Sonia Gandhi to traverse that last mile between 10, Janpath and South Block? The answer, say Congress votaries, may be quite simple. To come clean and spell out her alternative vision for India.