On The Dome Of Temple Mount 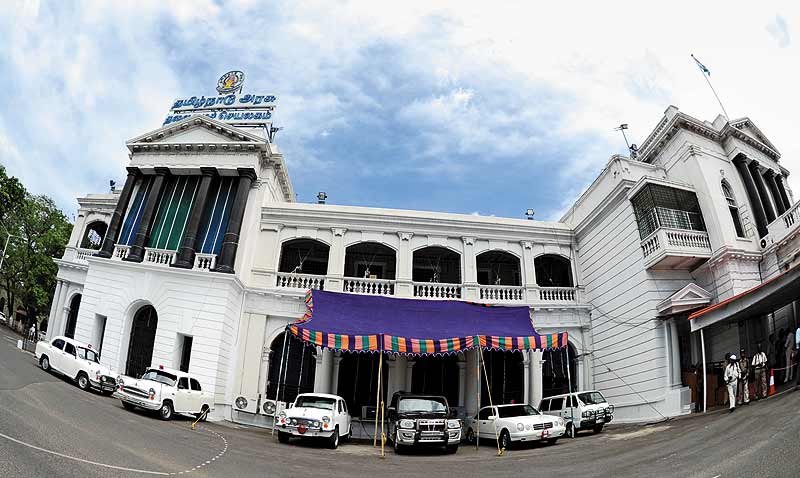 Fire obliterates like nothing else. In January, an inferno at the Khalsa Mahal, a 250-year-old heritage building in the Indo-Saracenic style, and part of the Tamil Nadu government’s Ezhilagam complex fronting the Marina beach in Chennai, killed a fireman, destroyed property worth Rs 2.7 crore, and reduced to ashes hundreds of files and documents in the social welfare and industries and commerce departments situated there.

Then, on April 11, after a quake in the Indian Ocean off Aceh in Indonesia, the 37-year-old Secretariat building, next to the 350-year-old Assembly Hall in the Fort St George grounds here, shook and trembled. Scared government employees raced out and into the fort precincts—protected by the Archaeological Survey of India and including structures spread over 123.5 acres. “People panicked, fearing that the building (Namakkal Kavignar Maaligai) would crumble,” said a secretariat employee, who saw plaster crumble and ceiling fans crash down. In this building with faulty wiring, about 5,000 employees work in an unsafe maze of cubicles. The same day, AIADMK MLA P. Ganesan, officials and party cadre in the secretariat were stuck in their lift. A rattled Ganesan admitted: “I vowed to offer vadamala (a garland of vadas) to the Kancheepuram Theradi Anjaneya temple if I came out safely.” Secretariat engineers rescued the trapped men by breaking open the lift door. After the fire at Mumbai’s Mantralaya last week, it has been driven home that Chennai’s old secretariat has had a narrow escape.

Yet, unlike other state capitals, Chennai does have an alternative—the controversial Rs 1,100-crore Secretariat-Assembly complex, built by the DMK off Anna Salai, Chennai’s main thoroughfare. Prime Minister Manmohan Singh had inaugurated it in March 2010; and several offices were shifted there. What’s more, even the assembly was moved here and business conducted for a session. Then, the DMK lost the 2011 assembly polls. Though M. Karunanidhi had moved the classical Tamil library into the old assembly hall, he should have known that in a culture of bitter political animus, it wouldn’t deter the new regime.

“Why not use a building in which crores of public money has gone in? Jayalalitha should know it’s not DMK’s money.”
C. Lakshmanan, Professor, MIDS

Once in office, CM J. Jayalalitha shifted the assembly back to its old quarters in the fort. She had had the old, creaky assembly hall—all wooden floors and staircases—readied for her rule. For a few days, thousands of curious AIADMK cadre and other citizens descended on the new assembly complex. Their curiosity satiated, they went back.

It’s known that Kollywood art director Thotta Tharani was paid an extravagant Rs 2 crore by the DMK regime to fashion a faux dome resembling the one planned by the German architects so that the complex could be inaugurated in time. Jayalalitha has now ordered an inquiry into “alleged irregularities” over its expenditure. The dome, she said, ridiculing Karunanidhi’s dream project, was a circus tent, the “cap of a Pondicherry cop”.

The Ezhilagam fire and the quake scare prompted patchwork repair in the old secretariat. It was soon upgraded to a proper renovation, which would cost Rs 28 crore. Its foundation was laid by Jayalalitha herself. It now appears that over the years, as top secretaries had their offices refurbished with every change of regime, the rest of the building went slowly to rack and ruin. Today, Class IV workers eat lunch on the staircases, the corridors lie crammed with dusty files. S. Peter Anthonysamy, president, Tamil Nadu Secretariat Association, may say: “We welcome the government’s decision to restore Namakkal Kavignar Maaligai.” But many question the move, especially when a new complex, though parts of it are under construction, lie vacant. 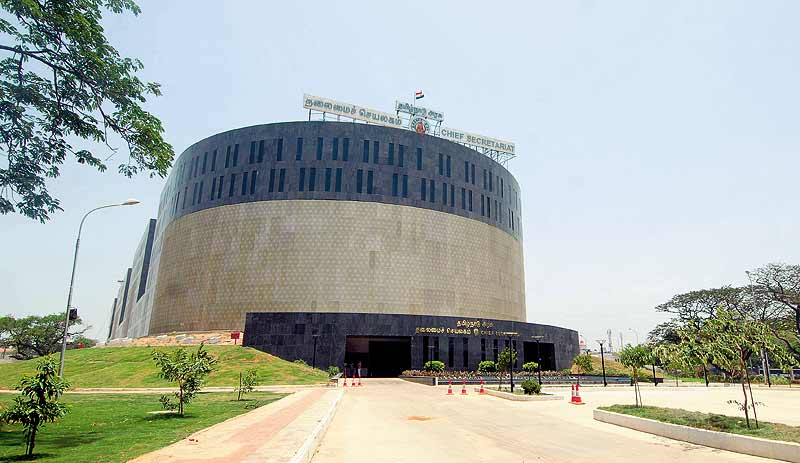 Historian S. Muthiah believes the renovation of the old secretariat and the construction of the new assembly complex are all steps towards destroying the city’s heritage. The city lost the Moore market to a fire and the Admiralty House to demolition. “Two old structures were demolished to build the new assembly complex; now repairs are being planned in a building lying in a historic complex. Alternative designs that integrated these buildings into the new layout would have to be drawn up. If only a Heritage Act were in place,” he laments.

Currently, there are over a dozen government offices all over Chennai. “Even 20 years ago, when my office was in Fort St George, the space was not enough,” says V.S. Chandralekha, a former IAS officer and now the state president of the Janata Party. Often, she remembers, the respective minister would say, “come and meet me”. “But that would entail battling traffic for 45 minutes each way to go to the fort area from Kuralagam (where she had her office) and back,” she says.

“The question arises if the AIADMK would reject structures built by past governments—like even flyovers.”
Vaiko, MDMK chief

While MDMK chief Vaiko says the new complex was built “in haste”, he also opposes the shift back to the old one. He asks pointedly: “The question arises if the AIADMK government would reject the structures built by all past governments, such as collectorates, court complexes, police commissionerates, even flyovers.” Dravida Kazhagam’s K. Veeramani posed a similar question soon after Jayalalitha announced on August 19, 2011, that the new complex would be converted into a superspeciality hospital and a medical college. “Is it because it was built by the previous CM? But it is not his building. Will the government avoid using flyovers built during the previous regime?”

Prof C. Lakshmanan of the Madras Institute of Development Studies says, “Jayalalitha could have protested earlier. Whatever flaws she finds could have been corrected then or even now.... What is the ground she cites not to use a building into which crores of public money has gone in? She should remember it is not Karunanidhi’s or dmk’s money.”

One of the first pils against Jayalalitha’s decision to reject the new complex was by advocate G. Krishnamurthy. He pointed out that the CM herself wanted to construct a new secretariat on the Queen Mary’s college campus during her earlier regime. Conservationists had stymied her plan then. Krishnamurthy’s petition decried the waste of Rs 1,100 crore of public money. If this was allowed, the PIL said, it would set a wasteful example that would burden the public. The court, however, dismissed the petition, saying it won’t interfere with policy decisions.

Later, Veeramani petitioned the court that it declare the new building’s conversion into a hospital “unconstitutional, arbitrary, illegal, whimsical, capricious, irrational and violative of environmental laws.” While it was being heard, the government began work on the conversion, and was told off by the court. Early this month, government counsel told the court that the conversion had been given environmental clearance, and that the interim order should be vacated.

That decision is still pending. The whole row only serves to highlight Jayalalitha’s stomach for a fight when it comes to trampling Karunanidhi’s legacy into the ground.

In The Age Of Unreason