One of the most thought-provoking books on the Indian intellectual heritage to come out in recent times. 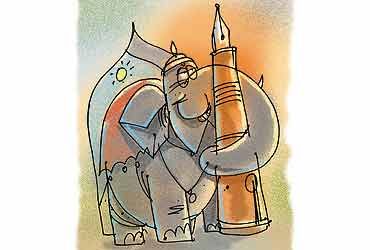 The discovery of Sanskrit in the eighteenth century was a sensational event in the intellectual history of Europe. Universities of the western world vied with one another to establish departments of Sanskrit and Indian studies. But in recent decades, India has lost its shine. From a major civilisation and one of the founts of high culture it has declined into an underdeveloped economy, with the result that its very name has disappeared from faculty nomenclature. Today, you will only find departments of South Asian Studies in which Indian civilisation and Sanskrit heritage rarely find a place. It is the age of area studies, reflecting the hold of foreign offices on academic thinking. One would not be wrong in supposing that if the naming of the oceans were being done now, an ocean would not have been named after India. Among the early birth places of high civilisation, Greece and China are lucky to be identified in their own right unlike India.

So it is a welcome change to find a big fat book devoted mainly to Indian literature although the title fights shy of mentioning India. Its editor describes it as "a history of the literary history of South Asia". Of its thousand pages, fewer than a hundred are accounted for by Sri Lanka and Tibet. Pakistan and Bangladesh barely get a mention. What we have is a panorama of the numerous literatures of India, with stimulating insights into the Indian imagination at work from the days of Valmiki, the Adikavi or first poet, down to our own days when Indian writing is identified with the novels of the likes of Salman Rushdie and Arundhati Roy in English. The writing is studiedly academic but not so turgid as to be off-putting. The patient reader not only makes the acquaintance of some of the great books of India he might not have known but is also rewarded with glimpses into the life and work of extraordinary authors such as Jagannatha Pandita, Appayya Dikshita, Samayasundar, Sarvajna and Madhusudan Dutt.

The main difference between a history of literature and a history of literary cultures in the words of the editor, Sheldon Pollock, is that the latter examines the social conditions under which literary creation can take place such as the relations between court, monasteries and the common people. Pollock propounds a thesis, with which the other contributors seem to be in agreement, to the effect that authors in India were always multilingual. In the earliest years, they had to know Sanskrit in addition to their own regional language. In subsequent centuries, Persian became not just the court language but the vehicle of interregional communication, until English supplanted it with the rise of colonialism, capitalism and Christianity under the British who claimed a civilising role for themselves. English has been holding its own despite Independence, although it has to come to a living arrangement with Hindi.

Professor Pollock is a Sanskritist but his views on Sanskrit would not be to the liking of the erstwhile rulers of India, who are convinced that it is not only the oldest language of the world but perfect in every respect. (One of his papers was called 'The Death of Sanskrit'. And he seems to believe that the Ramayana was written after the Mauryan era.) In his essay in this book he makes the grudging admission that "Unlike old Greek literature which ended with a single political act, the closing of the Academy by Justinian in 529, Sanskrit literature knows no abrupt or singular moment of termination. Instead like the late history of Latin, Sanskrit's literary decline was entropic. Because of this very entropy, Sanskrit, like Latin, though not so self-consciously, was the object of periodic renewals." This does not do adequate justice to the role of Sanskrit in sustaining the growth of the mother tongues by providing subject material, literary forms, inspiration and aesthetic sensibilities. Pollock seems to be on shaky ground when he maintains that Sanskrit literary theory is a late development.

But the one point where even a non-Sanskritist would disagree with Pollock is in his definition of Sanskrit literature. He insists that we should go by the criterion developed in Sanskrit literary theory regarding what is a kavya and what is not. The proposition that puranas and itihasas should be excluded from the class of kavyas is of doubtful validity in our age in which we are ready to include Thucydides, Gibbon and Mommsen in the category called literature.

While Pollock might have ruffled the feathers of many dyed-in-the-wool Sanskritists, he has rendered a service by pointing out the contribution of Sanskrit in endowing us with a vast spatial vision. India acquired a different kind of spatial vision with the adoption of Persian as the language of the court and of commerce. Akbar declared Persian to be the language of administration and besides the Muslim elite a substantial number of Hindus, notably the Kayasths and the Khatris, acquired proficiency in the language. Long before the Mughals, Amir Khusrau had asserted his right to speak his own brand of Persian when he declared: "Since I am an Indian parrot, to tell the truth, Ask me in Hindvi, that I may respond to you with elegance."

Muzaffar Alam's essay on the 'Culture and Politics of Islam in Precolonial Hindustan' describes how the ruling classes of the time attempted to make India a part of the Perso-Islamic world and delineates the impact of Persian on the vocabularies and literatures of India. Hindvi, as the Persian dialect evolved in India came to be called, had a vital role to play in the making of Urdu. A whole section consisting of four chapters examines the complex relationship between Urdu and Hindi, the 'close but contestatory' twins who were not able to coexist because of their political and religious affiliations. In an insightful essay Harish Trivedi argues that Gandhi's contention that Urdu and Hindi were the same language written in two different scripts failed to find acceptance. His attempt at sponsoring Hindustani as the national language was foredoomed to failure because of the deep emotional chasm between the speakers of the two languages. The employment policy of the British, who gave Muslims a preponderant share of government jobs, 63.9 per cent in 1857 and 45.8 per cent in 1886-7, although they formed only 14 per cent of the population, had created great resentment which fed the political antagonism between the two communities. The Nagari Pracharini Sabha aligned itself with the Congress even as the Anjuman Taraqq-i-Urdu sided with champions of the two-nation theory and the chairman of the Anjuman was constrained to remark that "Pakistan was not created by Jinnah, nor was it created by Iqbal; it was Urdu that created Pakistan."

Trivedi writes with great understanding about the problems that Hindi faces in independent India. It is the most widely spoken language in the country and in demand by the worlds of commerce, entertainment and administration but forced to share the honours with English. If some people complain that Hindi is becoming increasingly Sanskritised, it has to be borne in mind that that is enabling Hindi to move closer to the other languages of our country. For some time to come both Hindi and English are bound to inhabit 'the domestic space of the Indian nation, with Hindi as the fading jethani and the younger English as the more indulgent devrani.'

Vinay Dharwadkar's essay on English in India is a masterpiece. Within 80 pages or so he has packed a prodigious amount of historical insight and he also manages to take note of the achievements of individual authors. Norman Cutler, D.R. Nagaraj, Velcheru Narayana Rao, Rich Freeman and Sitamshu Yashaschandra have adopted different approaches to bring out some of the remarkable literary treasures in Tamil, Kannada, Telugu, Malayalam and Gujarati.

But even a thousand pages do not seem to do justice to several large chunks of our national literary experience. The treatment of Bhakti literature is very inadequate. While Chaitanya's importance to Bengali is alluded to, there is no mention of the Warkari movement of Maharashtra, which was a remarkable example of life being transformed by literature. But those who have edited anthologies know how difficult it is to ensure that they are comprehensive. The gaps do not take away from the value of what is one of the most thought-provoking books on the Indian intellectual heritage to come out in recent times.

A shorter version of this review appears in the print magazine

An Idea In Rigor Mortis